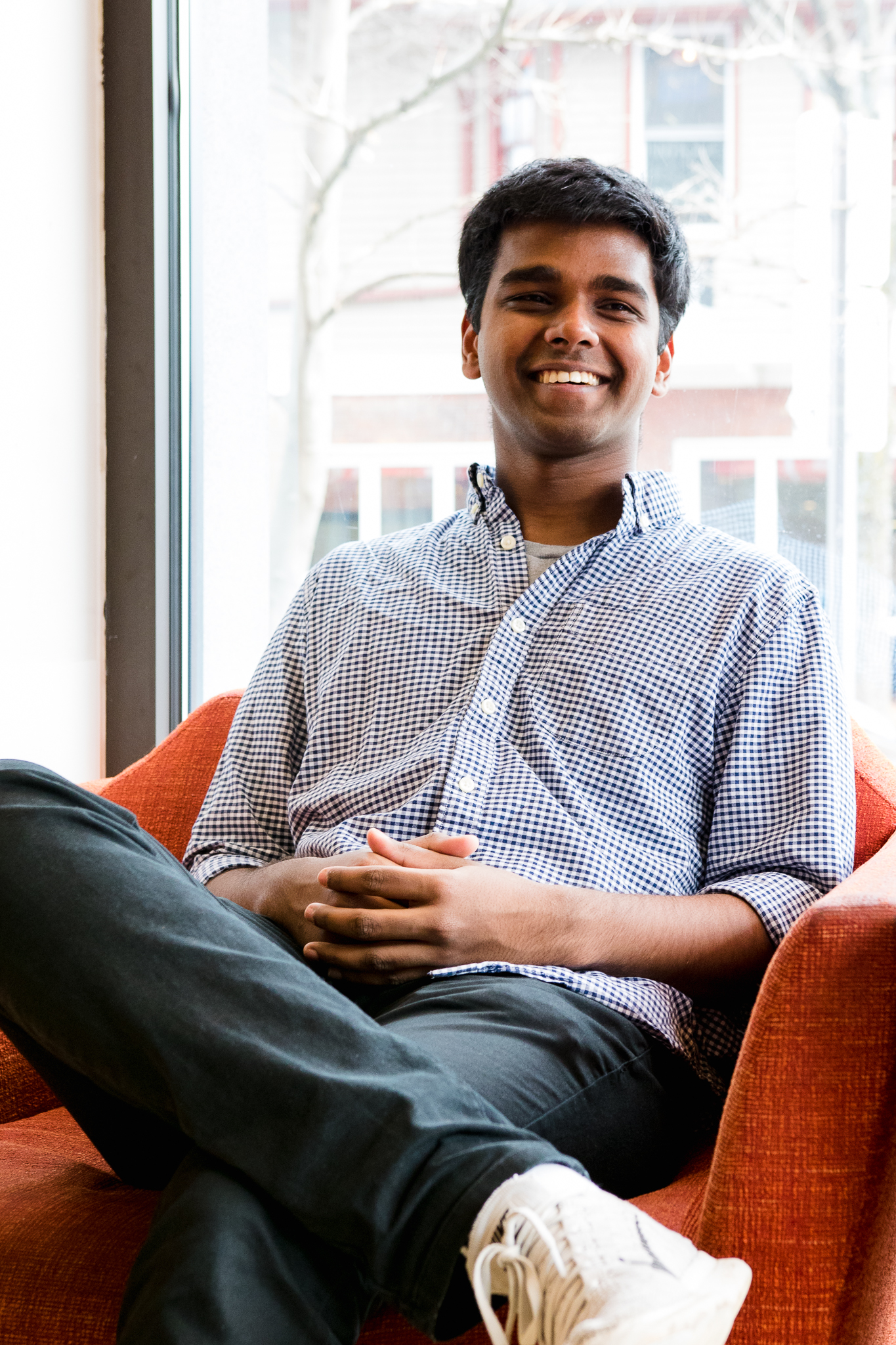 Athyuttam Eleti, who goes by Atty, is a computer science concentrator with a strong interest in graphic design. He is from Hyderabad, the fifth largest city in southern India and speaks English, Hindi, and Telugu. He has been the co-director of [email protected] for the past two years and is currently taking up dance with the beginners group Elements. Read our interview with Atty below to learn about him and his time at Brown! 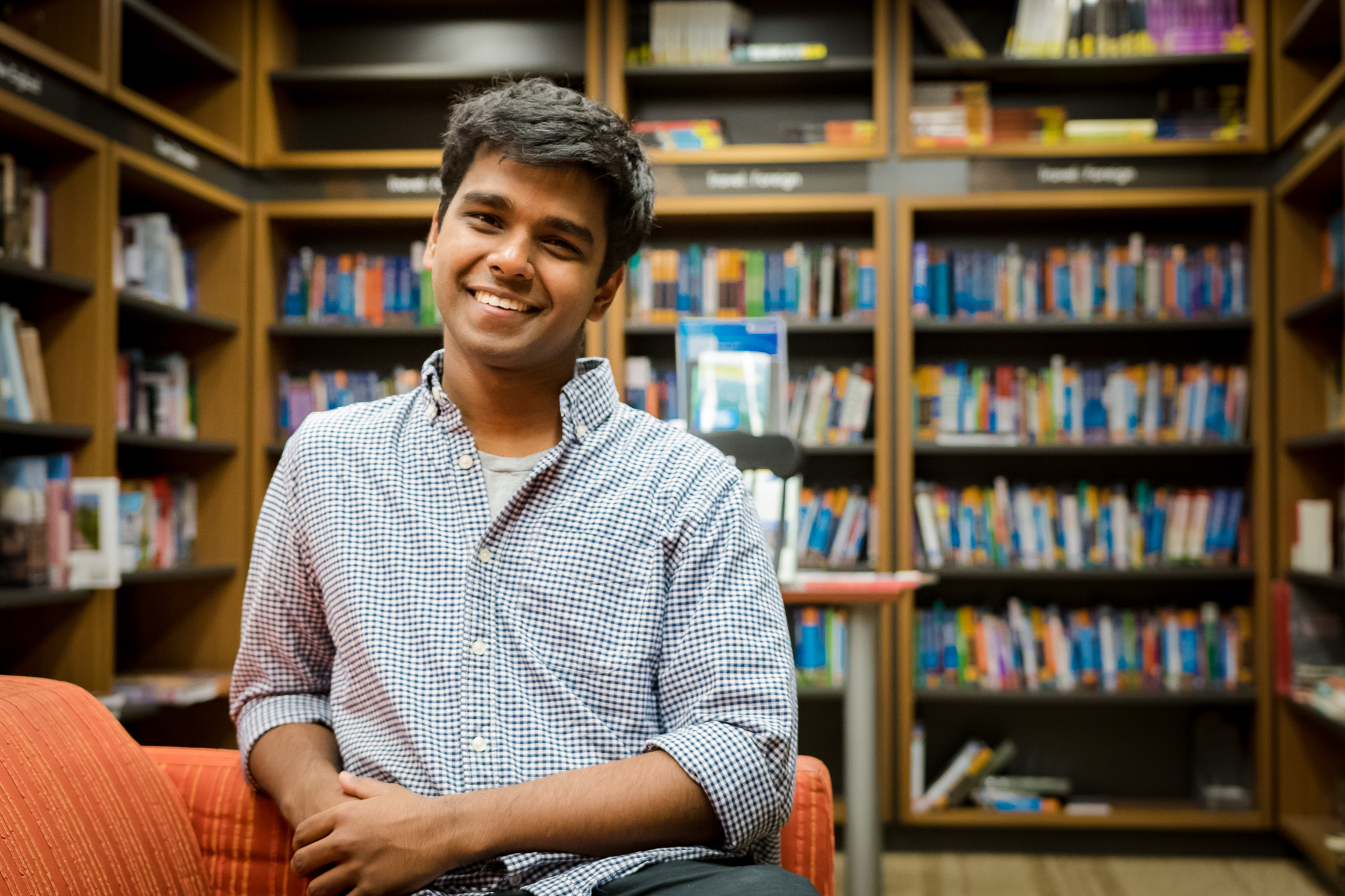 What clubs and groups have you been part of at Brown?

Easily the most formative and important experience of my college life has been being part of [email protected] The mission of this student organization, which is part of the CS department, is to empower all students from all backgrounds to learn and build awesome things… A lot of people from around the world, when they think of computer scientists, they see a guy who has been coding since he was five drinking red bull sitting behind a black and green screen, but that is a very wrong stereotype. The guiding philosophy is to make computer science more accessible so that all students will have the confidence to experience things.

IMP is another group I have been a part of, and even though I am no longer part of IMP, it is one of those stories that I like to tell people when they ask “Oh, so how is life at Brown?” I tell them that one of my favorite parts was coming in my first week and making friends from 70 different countries. On that note, mentorship has been another theme during my time at Brown. Mentorship has been a way that I can give back whether through IMP or the CS department helping freshmen get accustomed to Brown.

I have never been seriously involved, but I go on a lot of Brown Outing Club trips because I like traveling and outdoor stuff… most importantly, since it is senior spring, I told myself that I have to do things that I am really bad at and scared to do. That one thing is dance, so I joined Elements, a beginner friendly dance group and an offshoot of Impulse… the funny thing is we will actually perform at the Impulse show!

Where do you see yourself in the next few years?

I plan to stay in the U.S. for the foreseeable future. If I go back to India it will probably be to start a company in the tech field. My plan for next year is to join a company called Stripe in San Francisco. They build payment infrastructure, so they are a payments as a service company. I will probably be doing a bit of design and engineering with them.

Congratulations on the job!

Do you have family in the U.S.?

I have two distant uncles in the U.S.; one on the east coast and the other on the west coast, but my older brother of two years just moved here to study at NYU and is in a graduate program on journalism.

For middle school and a bit of highschool I went to this boarding school, Rishi Valley School, in India, and that is the place where I was really exposed to being open minded, questioning the world, and critical thinking; values that you learn in a liberal environment. That is what exposed me to studying abroad and a liberal arts education since traditionally in India you are expected to be a doctor, engineer, lawyer, and what not, but that opened up the doors a little bit in my mind. I did prepare to be engineer but on the sidelines a friend and I wanted to… try something else. We both applied to schools in the U.S…. and we were lucky! He got into Cornell and I got into Brown, each of us just one school, so the choice was easy. Brown was the only school I got into, but I don’t think I would have been happy anywhere else.

As someone who likes to mentor others, what piece of advice would you share with incoming freshman?

There are a lot of things I would tell them, but the best thing I would share is to do what scares you. Step out of your comfort zone. We all come from different places which makes us comfortable or uncomfortable to do certain things, so step out and try what scares you….You have opportunities in college that you will never have again, like sailing, rock climbing, or being part of a dance group…by the time you are a senior you will realize that there is never enough time.

In general, what is your current sentiment about leaving Brown in the next few months?

It is a mixed feeling. There is a stereotype that some seniors are jaded about their time at Brown… I do not think that is true for me at all; I could spend a lifetime here. Of course you build an attachment to the little things and the professors and classes, but it always comes down to the people that I have met here. I am beyond grateful to have had a few memorable experiences and to be able to count at least a few close friends.

What are you going to miss the most?

Friends. The people. My life’s philosophy is that human relationality is what gives meaning to life. It is the conversations we have, the time we spend with each other, the memories we make, the jokes we crack on each other… those moments and experiences give meaning to life. When I look back at my time at Brown…it is always the people.

What is your strongest or best memory?

It’s funny because the other day I was having dinner with a friend and I was at his home for seven hours until 1:00am, and this was one of the questions that came up. I think that far in a way, my happiest day at Brown was the [email protected] retreat. We took the entire team, 30-40 of us, to a house, an Airbnb in Newport and we spent the night together after a successful event. It really is a family who all deeply care and love each other. That night, just being with them, cooking food together, playing cards against humanity, cracking jokes, reminiscing, and then waking up at 5:00 am to walk on the beach… that week was really special. Just spending time with each other.

What did you find most difficult thing to get used to?

The hardest during my time at Brown was certainly last semester. I had a lot of anxiety and was struggling academically…I barely made it through the semester. The root cause of that was job interviews and me flying across the country to California every other weekend. Study for them and doing the interview was an emotionally draining process. I do not think it was because I was struggling to find a job, which is a very real struggle, … despite that, it is an emotionally hard decision. It is the first big job that you will have in your life…it was emotionally hard to reconcile.

Have you picked up Americanism during your time here?

Yes, it is common it pick up filler words and to walk and talk differently every time you move to a different country… but I think the bigger change I have seen in myself is that I have realized that my identity has changed. I grew up strongly feeling that I am an Indian, but now that I have lived in America for four years… I feel a little bit American and a little bit Indian. I feel a bit of patriotism to this country, and it is a very strange thing to say, but it is because I care about the people here. America is a home for me now.

When did you notice that you felt American?

I acknowledged it to myself during one of summers when I was working at Facebook in California and I went to a baseball game. The SF Giants were playing and at the beginning of the game, we all stand up, put our hand across our hearts, and sing the national anthem (not that I know the words), and it hit me then that I am part American. I am doing all of these things that are uniquely American. I do not know what that means, but I know that it is there.

Where you ever homesick and missed a certain food or dish from home?

Not particularly. I went to a boarding school, have always been a pretty independent person, and spent time away from home so I knew how to live by myself.

How has living here changed how you act/interact at home? Have people at home pointed out your different mannerisms?

Yes, for sure. The way I speak is the most obvious. The first one or two days I go back home, I say thank you a lot to shopkeepers and house workers, and it is strange and weird. My brother or friends will point it out and tell me to not act so weird, so I switch back to my old self for a while.

I have spent four years here and it certainly does not feel like enough…I recognize now that you cannot graduate without regrets, but you can graduate happy. I am lucky to have been here. I am grateful and I hope that I will be able to give back and enable this experience for future generations.

← Collecting and Healing a Fragmented Self: Learning to Practice Self-Care and Self-Love Away from Brown
So you want a summer internship… →