Areeb Mahamadi is a charismatic international student from Pakistan. He spent his freshman year in Colby College and then transferred to Brown. Areeb is well known for his tireless work as President of the Pakistani Students Association At Brown (PSAB) and for his heavy involvement in Mock Trial. Read our interview with Areeb to learn more about his favorite memories at Brown and his diverse experiences in the United States. 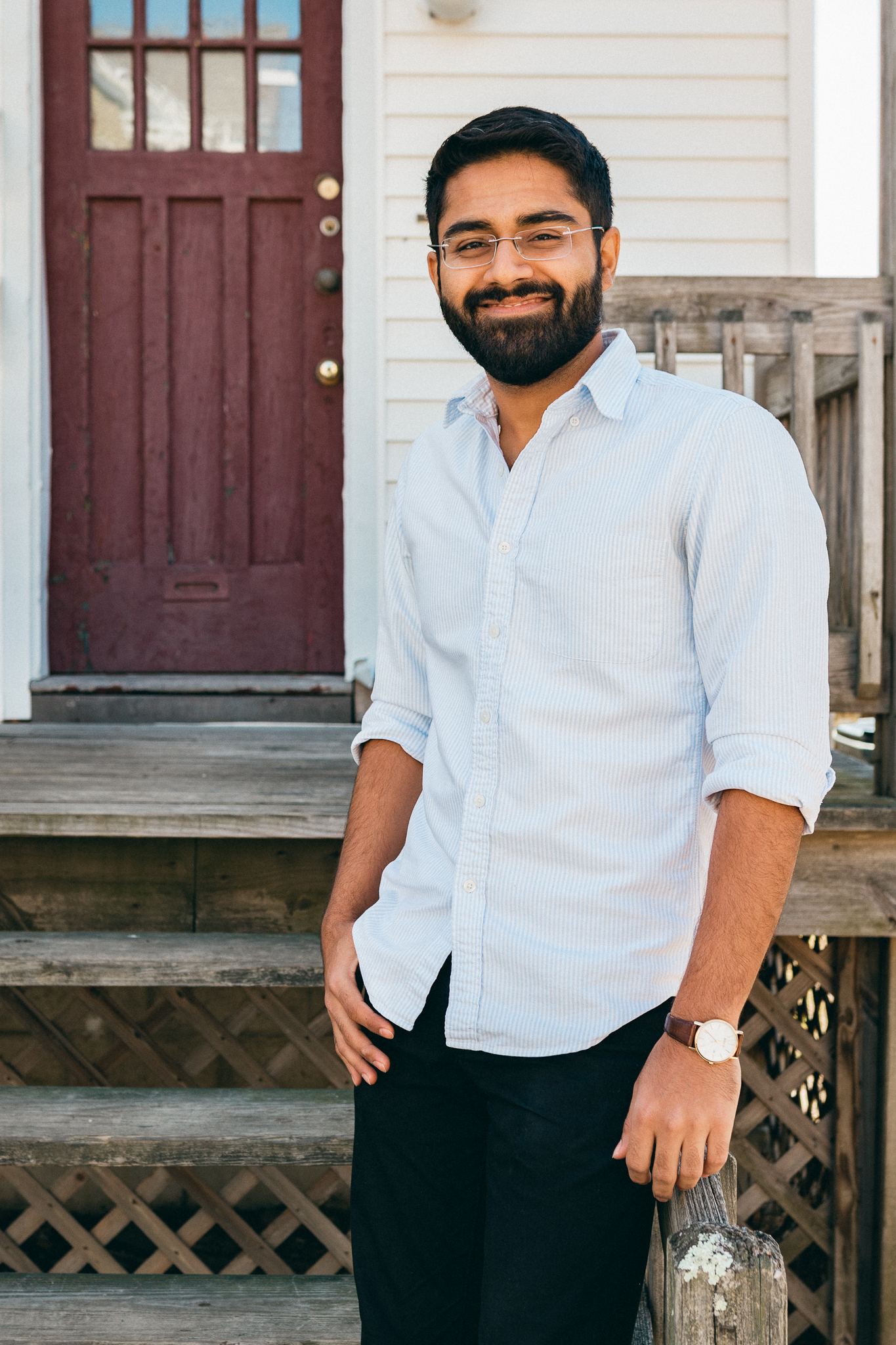 Political science and hopefully Economics (I haven’t declared it yet and considering it’s my 7th semester, I should probably do that soon!).

Well, Mock Trial goes on top of that list. It takes up so much of my time. And then there’s PSAB (Pakistani Students Association at Brown), which I’m trying to do a lot with. [What is the work you do for PSAB?] PSAB is mostly about connecting people and making sure we don’t forget where we come from. It’s also about having a community. As much as we can make Brown home, it’s just always nice to have our desi community and I really need that and appreciate having it. Which is why I’m also involved with the MSA (Muslim Students Association). The MSA is also about feeling at home and connecting with people over stuff you’ve grown up with- even if you drift away from or don’t connect with religion that much, which is nice because the community really helps you with that journey. My relationship with Islam has changed so much since coming to college but I always feel so comfortable in the MSA.

Why did you come to study in the US?

Because I only got in over here! (laughs) All three of my siblings went to England to study, I got into a couple of places there but they weren’t that good. I also didn’t want to go to England because all my siblings went there- I wanted to be somewhere different. Then I got into Colby College in Maine and Berkeley in California. I’m so glad I chose Colby, which is a tiny liberal arts college in rural Maine. Everyone was telling me to go to Berkeley but I was like no- I wanted a different experience. I come from Karachi, which is like, a huge city and so I wanted a tiny, tiny town. I kind of got sick of it after a year but I’m still glad I went because it was a completely different experience. [So you transferred after freshmen year?] Yes. [Why?] I just wanted more. Colby is very tiny, very rural and not diverse at all and there weren’t that many opportunities. I was just like- I need more. I was just trying to break out of that bubble and just expand and that’s when I started visiting different colleges. I visited Brown, Yale, Penn, Boston colleges etc. and so I started applying everywhere. It was obviously hard. But it was also one of the best decisions- one of the hardest decisions but one of the best decisions.

How have your four years been different from what you expected?

What did you find the most difficult to get used to?

The easiest, I guess, was being thrown into this new place where I had to find my own way. It wasn’t the easiest per say, but it was definitely what I enjoyed the most and appreciate the most. For example mock trial, I had never heard of it back home. I came to Colby, saw an audition poster, went to try out and it became such a big part of my four years. Just finding new stuff like that, that I never thought I would, was a wonderful experience.

What is the food/dish you miss most from home?

Aloo gosht, which is really delicious meat with potatoes, mixed in gravy (with loads of spices!). I just love it! When my mother makes it just right with some palak (spinach), and it’s perfect- it’s like heaven.

There are so many Americanisms that I’ve picked up, actually. But one thing I do is that I change the way I say some of my words because people just don’t understand otherwise. Like for example back home when the time was 3.30 we would say three tthut-tty (with an emphasis on the t sound). But here I say three thurrr-tee so I have to change the way I say it. I’ve definitely become more liberal which is not a bad thing; it’s certainly a good thing. I don’t know if that’s an Americanism but it’s definitely something I’ve picked up over the past four years

What is something you wish you knew before coming here?

That everything was going to change. I don’t have any regrets, but I wish I could have just armed myself with that knowledge. There are so many things that I’ve had to change with, that I’ve had to struggle with. But I guess that’s fine as well because the struggles make it worth it. And I’m glad that I struggled. So many of the decisions I made to change were definitely very difficult decisions, but I’m glad that I gave them the thought and debate that they deserved. But at the same time, I wish I knew that I was going to change in such fundamental ways.

Do you think your experience would have been different that way?

I think with that knowledge I would definitely still struggle because I grew up in such a specific way. Any change from that would certainly be difficult regardless of if I was prepared for it or not. But I think it might have made it slightly easier. I would have also embraced the change more easily if I had prepared myself beforehand for it. But I’m also happy with the amount I have.

How has your experience here changed your interactions at home?

Honestly, I haven’t even been home as much in the past few years. I mean I went over this winter and last winter. As soon as I go home now there’s just a constant comparison [How so?] Like for example when I land in Karachi at the airport and when I’m going home and driving in the car, there’s a constant comparison between Karachi and New York where my flight took off. Things like the roads aren’t the same, the immigration officers are so different etc. and that’s something that bugs me. It’s something I’ve struggled with a lot and I was actually talking to a friend about this earlier. I tend to judge our people more harshly because of what I have experienced here. For example once on the flight, when the plane landed and people were getting their bags down, there was this old aunty in front of me and at one point she just opened the overhead locker, tapped on to my shoulder and pointed at the locker. I was kind of put off by that because she could’ve asked me at least– I judge Pakistani people more harshly because of my experience here. If that had happened to me here, people would be like ‘ do you mind?’ or they would’ve asked for help and then would have thanked me a lot. There, it’s kind of expected that a young guy will help out an old woman, which is fine and good. I’m happy to do it but at the same time, it also puts me off a little bit. It’s just a constant comparison. [What about your dynamics at home?] Oh my god I’ve always argued before with my mom over differences of opinions, but it’s difficult now because I definitely have stronger opinions against what my mother may hold, but I’ve also kind of given up. She might say something in passing and I’m just like okay I’ll let this one go.

What are you going to miss most about Brown?

To be honest over the past two semesters, Brown has really become home for me. For example, when we had the snow day, I was going to meet some friends at India Point Park to go sledding. I left my house and was walking down the street and saw two friends walking back up and they were going back to their house.  So literally things like walking outside my house and seeing friends that I know that I can go to for anything and just this comfort, it feels so warm. Just leaving my house and seeing a friend or having my friends come over and stay at my house till 3.00 a.m. Once my friend was so scared to walk home alone at night and she said ‘Areeb, can you watch me going home?’ – she literally lives across the street so I stood outside the door and watched her going home to make sure she was safe – which was hilarious but also heartwarming. It just sucks to have to do it all over again. I made a home here and I don’t want to let go of it now [But I feel like your well equipped because you’ve also done it before!] Yeah. I’ve done it twice now because I did it at Colby and then I had to do it here. Honestly coming to Brown at first was so hard. The first semester here I was nervous about what I had gotten myself into because I had already spent a year at Colby and by the end of my time there, I had made some really good friends. Two of my closest friends in the world are friends from Colby so I was like why am I leaving Colby, why have I come to Brown, I don’t know anyone here. But it just took some time and I love it here now.

What was your favorite spring break memory? Something you may be looking forward to?

I’m definitely looking forward to Puerto Rico this spring break. That will be my first classic spring break with a group of friends. Last year, one of my closest friends (who goes to Cornell) and I went to San Francisco together. It’s something I’ve never done before (travel with one friend) and it was so chill! Oh and something really scary happened. It’s not the best memory but it’s a memory I’ll never forget. So we got back from San Francisco and landed at JFK.  I was going to take the bus up to Providence and she was going to take one to Ithaca. But our flight landed at 1 a.m. and our buses weren’t going to leave till 6 am. We got on the subway to the city and were in Manhattan with our bags. Our buses weren’t going to leave for another five hours. We were freaking out because we had nowhere to go and couldn’t find any 24-hour place open nearby. We ended up in Port Authority (where our buses were going to leave from), took our clothes out from our bags and basically just lay there on the ground. We were napping there till our buses arrived. There were other people sleeping and lining the hallways too. It was definitely terrifying and something I would have never experienced back home. I never let my friend forget that even though she tells me to get over it now!

Do you have any advice for incoming freshmen?

Nothing specific because everyone’s experiences are so different. I kind of want to say don’t listen to any words of wisdom – don’t be bound by anything anyone says.