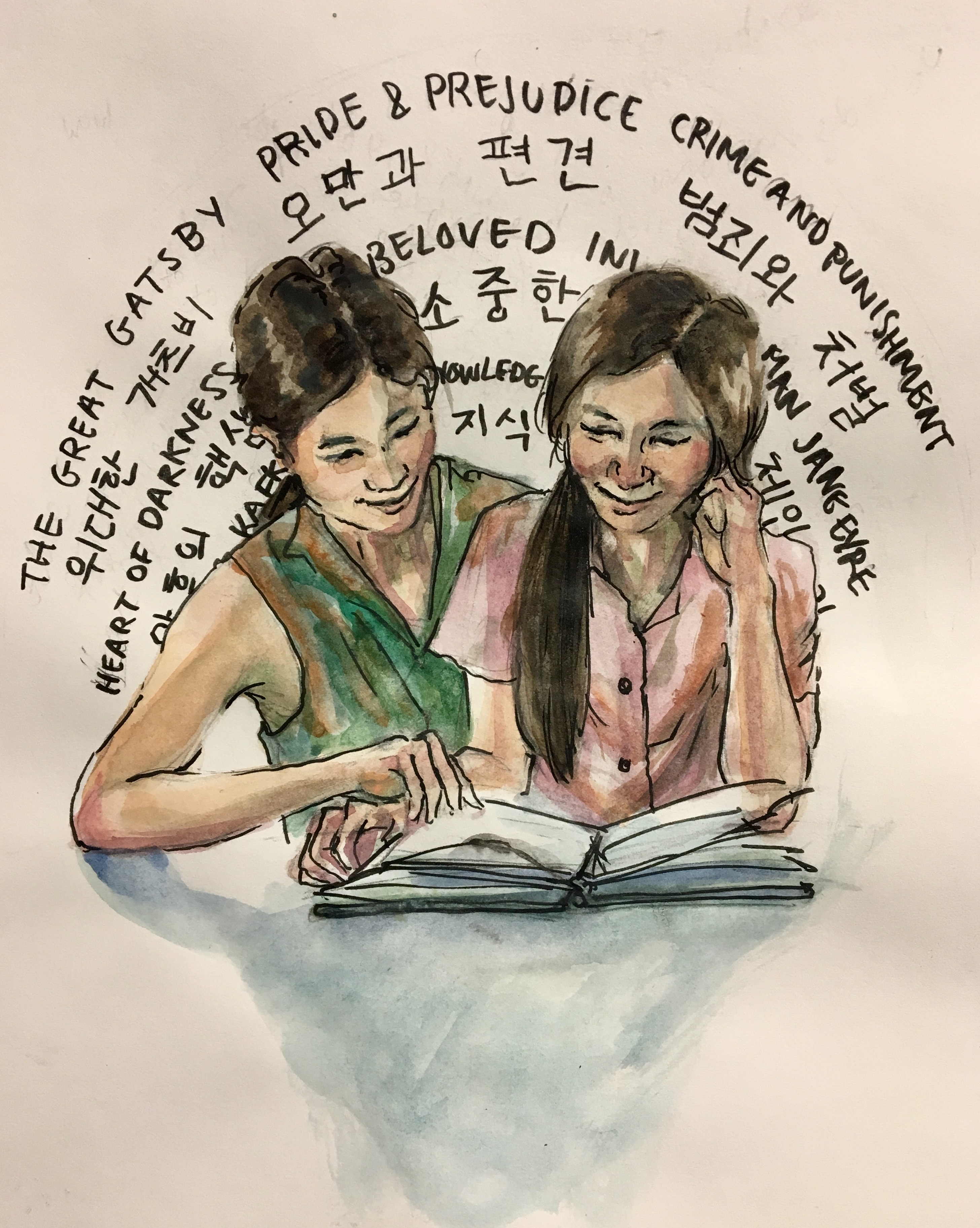 To Speak a Language (or Two)

Since high school, my mom and I had a little tradition of our own where we read the same book in different languages – she in Korean, I in English. Our reading list had a wide range of selection, from my high school reading list to contemporary Korean novels. It amazed me how we transcended the boundaries between two very different languages and still discussed the books in such detail. We talked about what becomes lost in the process of translation and how to reconcile those losses. When I was taking a Victorian literature class at Brown, my mom had to rummage through nearby bookstores and libraries to grab a Korean copy of Eliot’s The Mill on the Floss, which we had a good laugh about.

The fact that we read them in different languages enriched, not hindered, our discussion, creating a synergetic effect. Yet most of the time, unlike in our mini book-club, my two languages have often been in odds against one another. While I was blessed with speaking both languages fluently, I constantly found myself pressured to give up one for another.

Growing up in a majority-white suburb near Chicago, I was always under the mission to “assimilate,” to become as “American” as possible. I was told to talk, think, and breathe like Americans. I was only allowed to watch American television shows, read English books and talk as little as possible in Korean. I was told to hide my “Korean-ness,” as if it were concealable. “We look, sound, and smell different,” my aunt repeatedly used to say, “we have to do our best to hide it.”

Only now do I laugh at the irony and absurdity of my endeavors, as I tried my best to forgo my mother tongue in an attempt to erase my Korean identity. I once argued with a shopkeeper that I was my aunt’s nephew for ten minutes, as Korean doesn’t distinguish between nephews and nieces. After the incident, I was so ashamed that I refused to use the word “niece” for a very long time. Soon I began to associate English as my first and only language, neglecting my Korean under the pretense that speaking it somehow had negative connotations.

With great pride that I no longer felt alienated from my new community, I rejected my native tongue for most of my childhood. When I was outside with my mom and she was stuttering in front of the cashier, my ten-year-old self pretended to not know her or impatiently interrupted her. When people complimented me on my English, or mistook me as Asian-American, I felt like I had accomplished my mission.

Few years later, when we moved back to Korea for a brief time, my world was turned upside down. I felt estranged in my own country amongst my own people. My mom, who was a Korean teacher, had to drill me in Korean with grade school textbooks for several months before I was able to read and write properly. My naive 6th-grade self put the blame on her for letting me neglect my Korean when it was clearly a necessity. “I’m sorry,” she used to say, “I didn’t expect that we would have to return.”

Only then I slowly began uncovering memories in which either I or others looked down upon her. My mom, who loved old film, books and used to teach Korean for a living, was belittled to another quiet Korean lady with a funny accent. I still cannot forget her expression when a friend’s dad came over to us after school to say hello, and with a careless smile asked “You’re not from here, are you?” She just quietly smiled, perhaps because she didn’t know how to reply, or maybe she just didn’t want to.

“You’re a Korean teacher, why were you so insistent on me only speaking English?” I once asked. “I wanted you to have more opportunities,” she replied. As I tried to comprehend her vague response, I realized that my family’s arguably skewed notion of “assimilation” and “American-ness” was their surviving mechanism. They needed someone who could argue with the cable company over the overcharged bills and talk to the landlord when the neighbors were too loud. They needed to seem quiet and accommodating to make a living. And most importantly of all, they didn’t want me to undergo what they have went through.

Ever since, to reconcile my complicated relationship with language, I gradually drew a clear line between the two. English is the language I use to present myself to the outside, the one I speak in school and write my resume and conduct job interviews in. It shows my more polished side where I can more easily hide my insecurities. It is the “universal” language I can speak almost anywhere I go – the language, in Korean culture, that embodies empowerment and economic mobility.

It is the language that brings bittersweet memories – of my childhood of moving back and forth between the two countries, of Korean society’s obsession over English (which my family was not free from), and of my family’s experiences in the states. I refuse to talk to my parents in English, even if it is harder to convey what I mean in Korean, and even when they jokingly ask me to so that they can pick up some new phrases. Perhaps it is out of awkwardness. Perhaps it is out of guilt and acknowledgement of the hurt I’ve caused.

My feelings towards Korean, on the other hand, are much simpler to comprehend. It is the language I know in and out, the one I use to talk to my closest friends and family members. As my college roommate and I sat in our beds late at night, too invested in our conversation to sleep, our language gradually shifted from English to Korean as we began sharing our deepest fears and vulnerabilities. It is a more private language, the one I do not speak while traveling or presenting myself in the professional world, but the one I am most comfortable and at ease in.

In that sense, language has challenged me to discover and accept multiple facets of myself. Instead of pulling one language closer and pushing the other away, I separated the two and embraced how I presented myself differently in different moments. I realized that my fear that I cannot feel like my complete self in either language represented my insecurities that I felt neither fully Korean, fully American, nor Korean-American. As I slowly found a way to reconcile different parts of my background, best exemplified through the two languages I acquired along the way, I convinced myself I need not confine myself to a single identity.

On our third day in Beijing during a summer immersion program, my friend and I stood in front of a bubble tea stand for twenty minutes, writing figures in our translation app to decipher the menu, only to order lukewarm green tea in the middle of a sweltering day. “I now understand how you must have felt,” I complained to my parents as they chuckled at our ridiculous stories of surviving in China with broken Mandarin. These moments remind me that while language can drift us apart, both from our loved ones and from ourselves, it also helps us heal by transforming such painful memories into those of empathy and forgiveness. It possesses the power to heal the very wounds it has caused, just like we do.