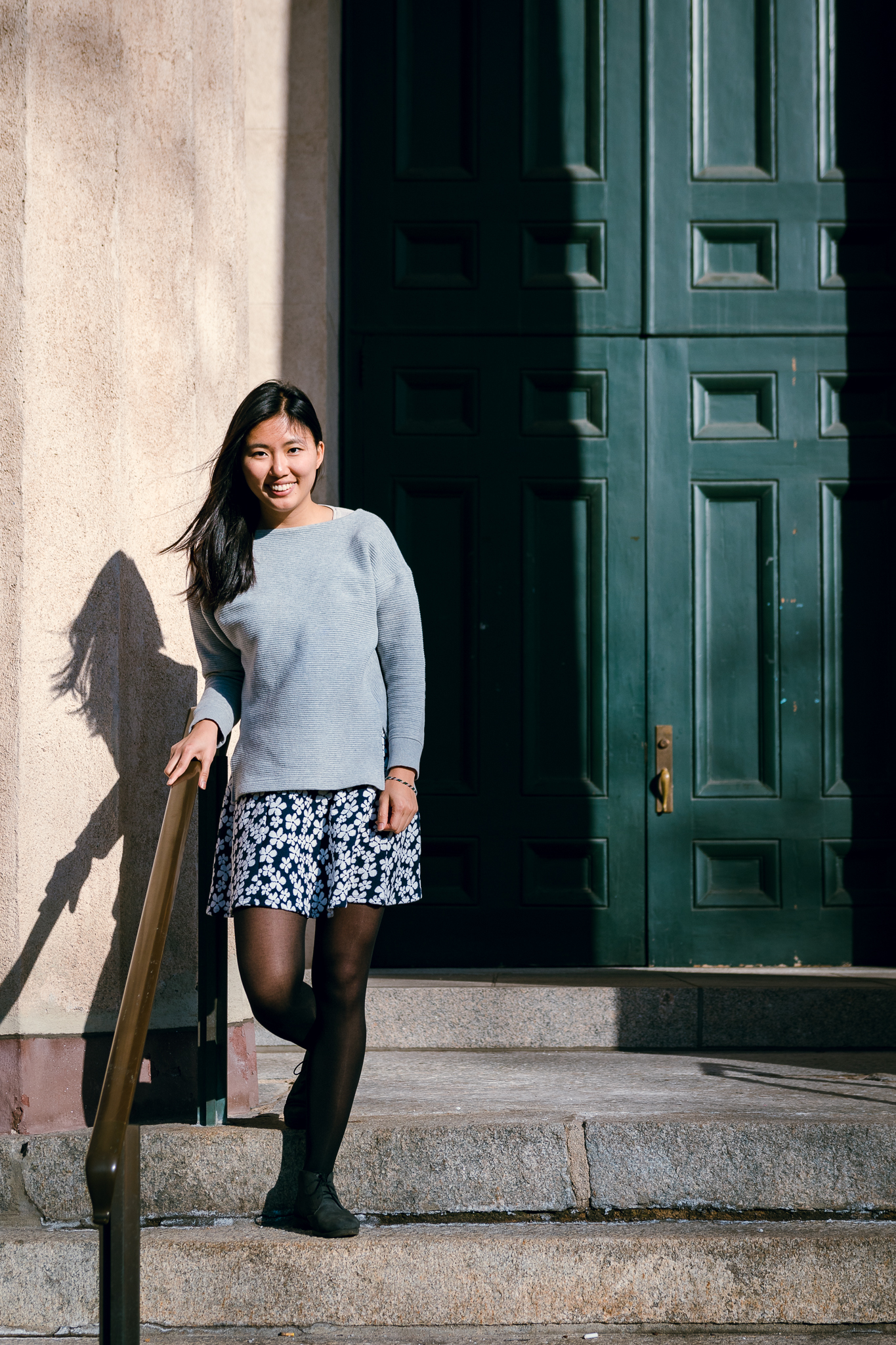 Kassie Wang is an international student from Singapore. She came to Brown for the flexibility of a liberal education in the U.S. and is concentrating in Engineering. She has been involved in many clubs at Brown and likes building things. Read on to learn about Kassie’s favorite memories at Brown and what she’s learned. 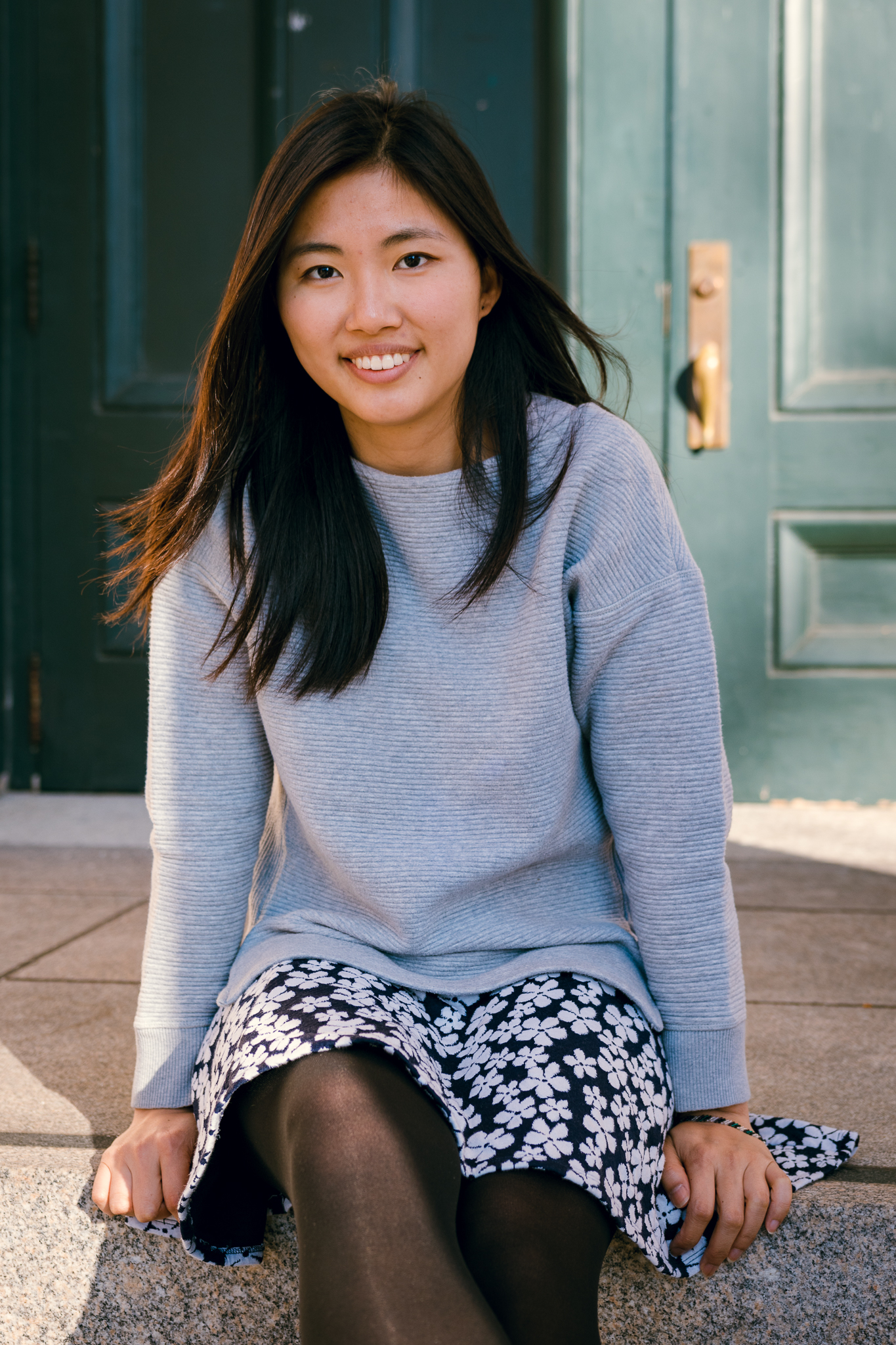 Singapore. I was born in Wuhan, China and moved to Singapore when I was five.

I study mechanical engineering with a focus on structural mechanics, so it’s kind of in between mechanical and civil engineering. I like the intersection because I like the design part and also building things.

English, Mandarin, and a little bit of Spanish.

It’s a lot. I have played Club Basketball. I’m also the Vice President of the Badminton Club. I was in China Care sophomore year and junior year, and then I went abroad. There’s also CubeSat. It’s actually a satellite team that Brown launched with NASA; it’s a 10 centimeter by 10 centimeter by 10 centimeter nano satellite. Now it’s called the Brown Space Team. Because I went abroad junior spring, I didn’t continue with them after. [Where did you study abroad?] I went abroad in Santander in Spain. It’s a tiny little town where no one speaks English and full of old people and dogs, and it’s really cute.

Why did you come to study in the US?

I wanted something more liberal in terms of my education. I didn’t know what I was getting myself into. I feel like as an engineer, if you study in Asia, all you do is engineering; it’s very focused and in-depth and it’s a lot of math. In here, if you study engineering, especially at Brown, you learn to be an engineer but also an urban planner, a designer and so on. It’s a very broad-based education, and I think that’s very important for real life because as a working engineer, you’re going to deal with all these different people, like architects and urban planners. I think definitely this will be more beneficial than just learning math and solving problems very well.

How have your four years been different from what you expected?

I feel like I expected a little bit more difficulty adjusting to life in America. I think all I knew about America was from the shows and movies and stuff where it’s all like the stereotypical cliche where American white kids bang together and stuff. Coming here I realized that the environment at Brown is very conducive for outsiders to come in and be welcomed, so I felt very at home, so that was surprising, and also how easily I fit into the culture and felt a sense of belonging. Also it might be because the friends I have aren’t stereotypically “American” friends, like I hang out with a lot of international kids, and everyone in engineering is very nice and chill. I didn’t have bad experiences, so that was surprising.

What did you find the most difficult to get used to?

The weather! It’s so cold. Also it’s because Singapore is like summer all year around. I don’t think I will ever be able to live in a winter country ever. [Are you going back to Singapore after graduation?] I’m going back after. I’m on scholarship, so I’m working for the government after I go back, for six years.

I guess for me learning here was easy to get used to, just because coming from Singapore with the rigorous education system really prepares you very well, but I’ve also heard different stories from all my friends. Some people feel like it’s very easy to adjust to school, and some people feel like it’s a big leap, depending on the education background. It’s actually unfair in some way.

What is the food/dish you miss most from home?

I miss everything from home. Maybe sanbal stingray the most, it’s like eating very tender fish without having to worry about bones. It’s really really good. We put a thick layer of chili sauce on it, and it’s cooked on a banana leaf, and it tastes really good, it’s grilled. 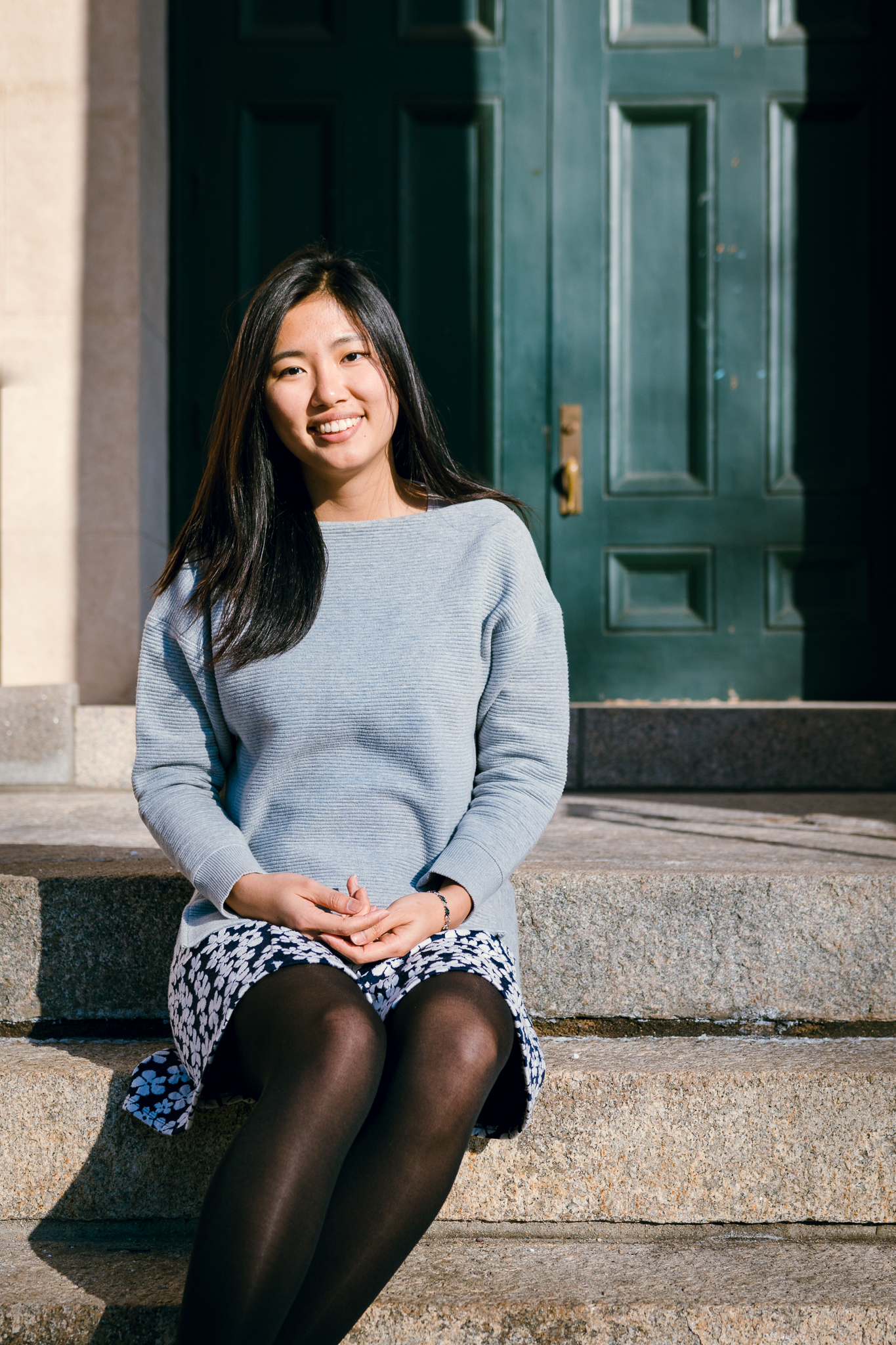 Maybe the American accent. When I go home sometimes my friends say I have an “American twang” because I say stuff like “yall”. I try to kick the habit and go back to talking “Singlish” when I’m at home.

What is something you wish you knew before coming here?

Maybe some ways to talk to people, like how to make small talks. As an international freshman, I was just very confused about how to make small talks, like it was hard to adjust to the fact that everyone was very friendly, on the surface, and everyone was like “how are you doing” and stuff. That wasn’t a part of my culture to do that. So it would have been really helpful to understand the culture and what people expect when they say “hi, how are you,” [that] people aren’t expecting you to go on a long spiel about your life, and they are just being friendly.

Do you think your experience would have been different that way?

I think with that knowledge I would definitely still struggle because I grew up in such a specific way. Any change from that would certainly be difficult regardless of if I was prepared for it or not. But I think it might have made it slightly easier. I would have also embraced the change more easily if I had prepared myself beforehand for it. But I’m also happy with the amount I have.

How has your experience here changed your interactions at home?

It definitely changed the way I look at the world. I am noticing a lot more sexism, racism. I think back home we don’t really question things; we just followed the rules, and we just focused on studying as a kid, and we didn’t go out there and questioned things like that. I think now after being exposed to such liberal education, you see there are issues in the world that someone less informed might overlook. I just start questioning things like why do we only have a single party political system. I think it just makes it a lot more conscious person and more willing to be adventurous and travel more. I think that one thing that struck me when I went back home was how everyone didn’t really speak their minds. In America, I’m more used to people saying whatever’s on their minds and voicing their opinions, but people don’t really do that [back home]. I think it might be because people are more apathetic or the government might be shutting down some comments, so people are less vocal about things. 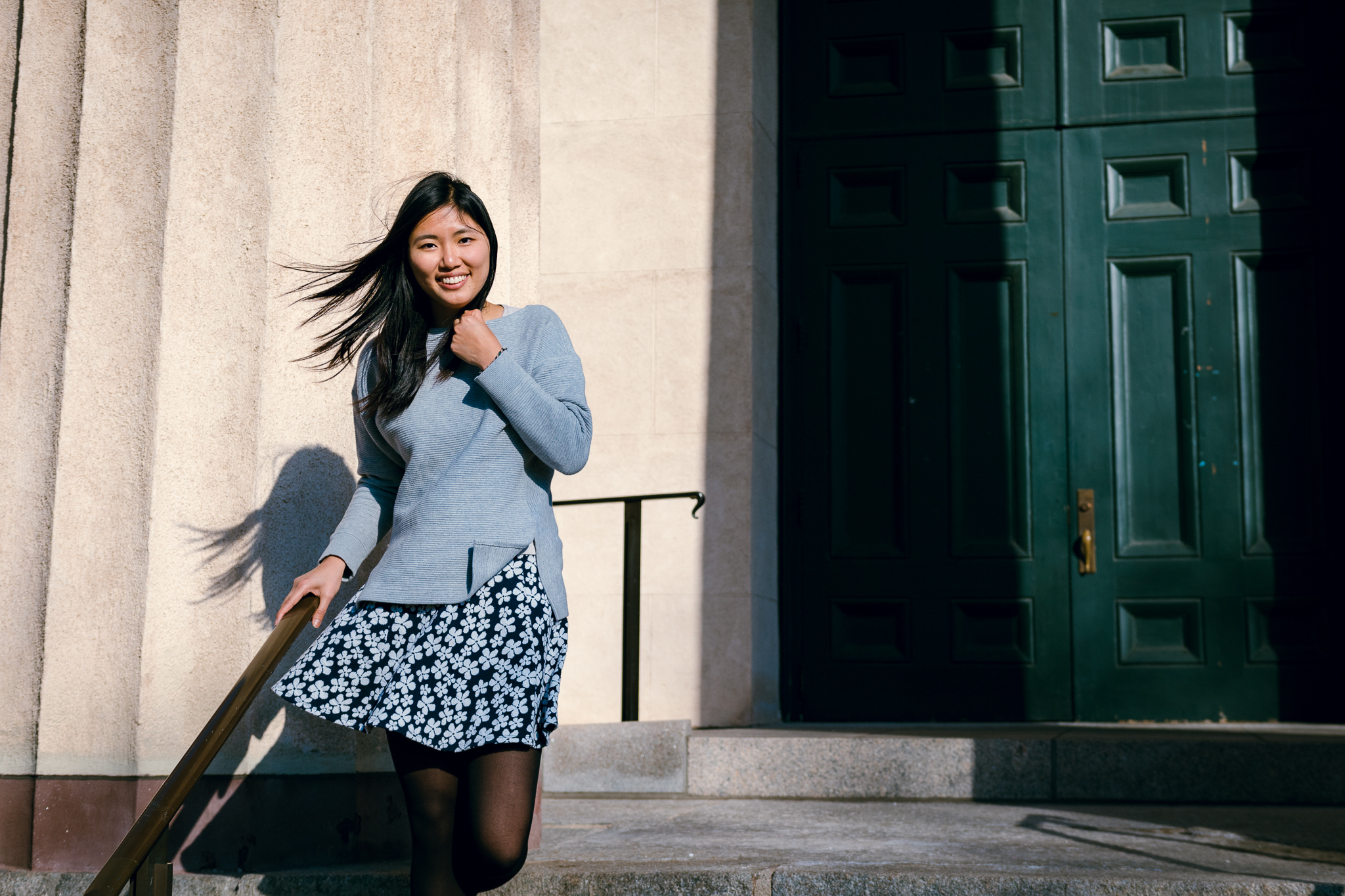 What are you going to miss most about Brown?

So many! I would definitely miss the people, and also feeling so comfortable in a place and being able to go to so many events and talk about all sorts of things, and going to class and learning about how you can apply what you learn in class to real life. I did a lot of design classes and more [hands-on] projects, so one of my senior capstone classes was to design a station, like an inter-motor station for the Amtrak station in Providence to improve people’s accessibility going from trains to buses and stuff. So the idea of using your learning to affect change, I really like that. I really like how much people here push for that, like pushing to affect change and entrepreneurship and stuff. I like that mentality. We made a vegetable spiralizer, it was very interesting. During the Hack at Brown this year, we made a device to help blind people to sense their surroundings, like when they go down the stairs, they wouldn’t fall down.

What was your favorite memory at Brown?

My favorite memory is probably working on projects with friends, and having it actually worked out, and we’re just like, yes! During the Hack at Brown project, and we were just learning about Arduino, and we didn’t know anything about it before, and we spent two lessons in workshops, and within the 24 hours we were actually able to work out something, so that was like a big accomplishment, and we were just like, oh my gosh, it works! And I was working with my housemate, and we complimented each other really well. We made an ankle-wearable, and it helps blind people or people who are clumsy at night, and it warns them if they are going down a stair or if they are falling into a hole or something, or if they are going into an obstacle. And we actually won the Best Newcomer Award, and we got a speaker as a present.

I went to New Orleans sophomore or freshman year. I went with my friends because I didn’t know what it was like, and when I went I was like oh my gosh it’s so cool. It was right after Mardi Gras, so they had beads hanging off trees, and the whole city was decorated with beads and necklaces. We also went to a voodoo museum. We learned about how the African culture influenced voodooism and spiritualism and thinking, and the food was amazing.