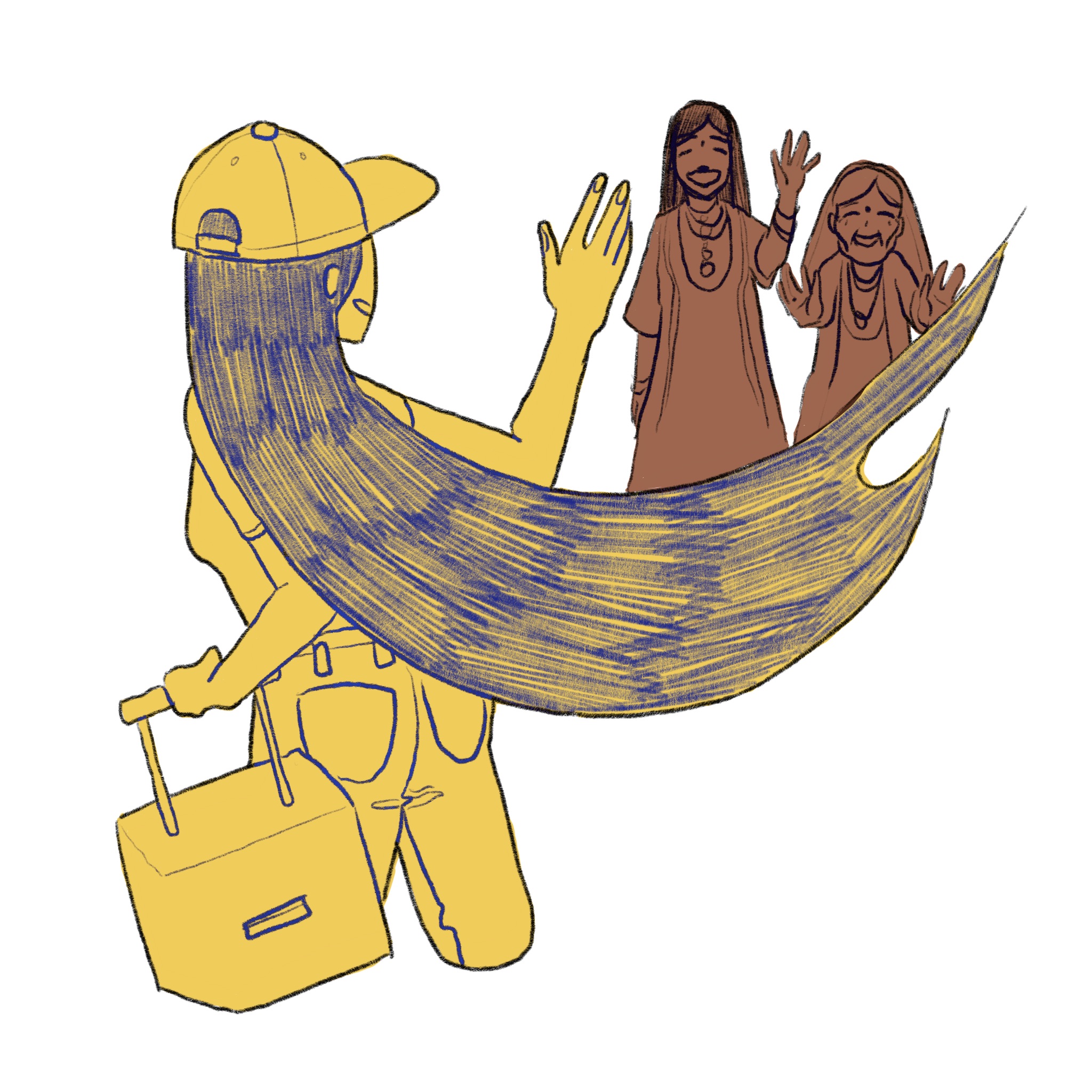 I am my ancestors’ wildest dreams

Warning: This post contains references to sexual assault and violence which some readers may find disturbing.

The term “wildest” can be interpreted in countless ways. For many it could mean showing your fun, party-loving, letting-your-hair-down side. For some others, it could be trying out something new and adventurous like  taking a solo trip around the world to learn how to watch a movie or eat a meal alone, coz well why not? But today, I’m not here to talk about these popular perceptions of the term “wildest”. I’m here to talk about how far women had to come to reach the point where I currently stand—something which should have been accomplished long ago.

I still remember how happy my mother and other female relatives were when they found out that I would be the first girl ever to step out of my house and my country to pursue higher education at such a prestigious institution. Their pride was clearly reflected in the happy tears that streamed down their faces and with that I could see myself living their “wildest” dreams that they never got to fulfill, and in some cases were not even allowed to dream of. Masked behind this were also tears of sadness for an education that they never had access to because they were married at an age when one just learns of the word marriage and for others, tears for degrees that were never put to use and instead were put away so they could raise “strong, independent kids” and always cater to their husbands’ needs.

I might not remember the nitty gritty details of my upbringing but I do know that the female influence in my life defines me today. Ma is one of the most compassionate and bubbly souls I have come across who fires up like a ferocious lioness when someone/something tries to harm her cubs. She has always encouraged me to go after what I want and drilled this one piece of information into my head: the importance of making something of myself and being independent so that I will never have to depend on anyone else. There’s a saying that goes ‘You carry your mother in your eyes’ and when I repeated this to my mother, she tried to choke back her tears and told me that my eyes would not be able to bear her weight. The fragile hands of my Dadi that used to lay mangoes out to dry every summer (to make pickles and mango jelly!) like clockwork also wiped my tears whenever life broke me down and taught me to rise like a phoenix from the ashes. Oh and my quirky and absolutely adorable Nani! She has made me a lover of horror movies by watching scary TV shows with me late into the night when I was little. Whenever I accomplish something, she suggests I go out and eat paneer 65 (it’s the one dish she misses the most from her visit down south) and when I am disappointed, she commands me to go have twice the serving of it to celebrate even the failure. Her love for swings has passed down generations and into my genes which I hope one day I would pass on to my grandchildren and keep this unconventional tradition alive. I might not be close to all my relatives or have spent as much time as I wanted to with them owing to the fact that I grew up in a different city but the limited time I did get to spend with them has had an impact on my personality growing up, and I try to imbibe the principles they’ve taught me in everything I do. I wish they could have gotten to showcase all these fun and unique sides of themselves to a much wider audience and inspire men and women alike as they have inspired me and continue to do so.

I come from a long line of strong yet kind women. Seeing their strength shine in my everyday life, I find myself wondering: why is it that only now, women are “allowed” to work? To leave the domestic sphere and make an impact in society instead of hiding behind Ghunghats (veils) and customs? Why is it that only now are women allowed to wear whatever they want to (and at what price? Read: rape) without being concerned about whether it would cause a “scandal”? Why is it that only now are girls are encouraged to open up about the injustices they have experienced? Why is it only now that women are not shunned and seen as something “impure” at “that time of the month”? (In all fairness, this is still an issue that is yet to be resolved as many young girls/women during menstruation are confined to a separate room, not allowed in the inner sanctum of  temples, kitchens or other common areas and are made to use separate things because everything they touch is deemed contaminated) Why is it only now that closed toilets are being constructed in remote Indian villages as opposed to the open defecation that many generations before us had to go through? (This is something common to both genders but women are forced to go in pairs to defecate in the open fields at the crack of dawn. Additionally, they have to take extra precautions lest they get leered at or worse, raped. Not only does this put their modesty at risk, but has indirect repercussions on their children in the form of diseases caused by fecal contamination)

It is the 21st century and even though I’m glad that women all over the world are opening up about the unspeakable acts of crime and atrocities committed against them, it upsets me that such incidents continue to happen daily. On the one hand, women are taking India into space and making women around the world immensely proud, on the other they are being subjugated to horrific acts of violence like the Nirbhaya gang rape, with similar cases countless like her have faced and continue to face. I cannot even begin to fathom how long it would have taken for her mind to give up before her body succumbed to the physical injuries no one should ever have to go through. How can someone be okay with the fact that they were responsible for the death of a young and budding life, of a girl who just wanted to live her life and make something of it? How can they even have the thoughts of trying to insert rusted iron rods into her genitals and pulling out her intestine with their bare hands and throwing it on the side of the road like it is garbage? BBC had come out with a documentary on the whole incident and I had to double check to see if I had heard it right when the mother of one of the defendants was complacent about the entire incident and said that this was something that the government and media came up with to taint the name of her son—that he could not do anything wrong, ever. The onus to raise conscientious kids should not fall on only women anyways. As human beings, sexual assault should shock anyone to their core irrespective of their gender. I strongly believe that if people had access to even just some basic education and most importantly sex-ed, it would vastly improve the approach families take to child-rearing. Such subtle changes might not have any tangible results straight away, but they do play a huge role in shaping one’s personality and conscience. And maybe, just maybe, Nirbhaya would still be alive today.

Imagine how much better the world would have been if women were allowed out of the house since the beginning of time. The question of equality at the workplace or any place for that matter would have never been raised because the world would have been accustomed to not seeing women with a filtered lens as they do right now. I’d like to believe that incidents of sexual harassment and discrimination would have been significantly lower because with access to education comes a sense of awareness, and with that awareness perhaps will come more empathy and compassion. Little girls may become more empowered by their knowledge and education, and would grow up to pursue whatever it is that they dream of instead of being forced to learn only skills that would make them suitable for the right husband and ergo the perfect wife. Little boys would grow up to see women as equals and not individuals that should be owned or looked after. The question of maintaining “ghar ki izzat” (dignity of the family/household) would not fall on the delicate shoulders of little unborn girls and would have to be equally borne by both genders. Daily chores such as cooking and grooming would not be something that is learnt and passed on just to the females of the house and activities such as plumbing and automobile repairs would not be restricted to the males in the house. It would be okay for guys to be more sensitive and let their feelings out and it would be okay for girls not to conform to the gender-based restrictions on behavior set by society. Although all of these seem to be minor changes, each of them would have had profound impacts and helped to avert  the sad state of affairs that we see today.

As I sit here trying to determine how far the female generation has come, I’m in awe as to how much we’ve accomplished over the past decade but also feel a tinge of sadness as to how much there is still left to achieve. There is still a long way to go before the ideas of acid attacks, burning brides for dowry, marital rape, female infanticide and honour killings will be completely abolished and men would see women as equals—such that we would not have to come up with a feminist movement to demand something that should have been a birthright. After all, feminism asks for equality and not to prove that any one gender is better than the others.

Don’t get me wrong, the male presences in my life has been equally important in shaping my personality and making me who I am today but it is the female side of my family that I am particularly proud of. That is why I am indeed my ancestors’ wildest dreams.