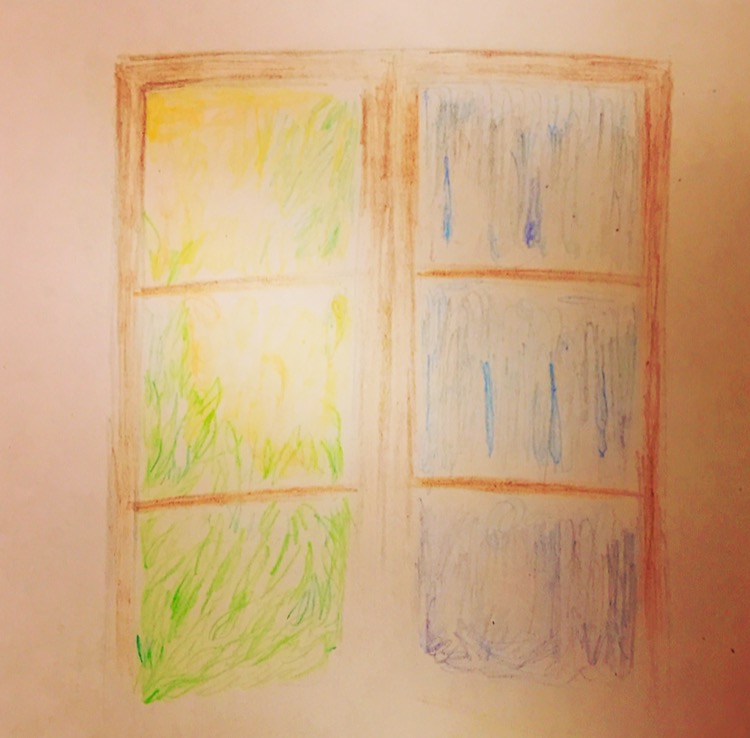 By Anonymous. Art by Maheen Syed ’19.

When I fell asleep, the rain was pouring outside
I watched, through hazy eyes, past my eyelashes
at the old window frame and all the droplets on the panes
I watched them drip, drip
as the light drained out from around me
I woke up as if into a nightmare
One that couldn’t really be true
but it was, and I couldn’t wake up anymore
because my eyes were open
and the blankets against my fingertips
were as real as could be
they refused to fade away
as I pressed against them with my body
refused to give me the consolation of no substance
but said to me mercilessly: this is real, this is real, this is real
All I could do, was to return to slumber
for a nightmare is better when asleep than when awake
all for being the less real

The next time I opened my eyes
the old window frame was still there
its brown was still uninspired, and its contours still dull
but the panes lost their droplets
they were so bright, so green
the sunlight was unforgivingly cheerful, absurdly brilliant
the leaves ridiculously youthful,
its green marveled at itself, and said of the world
that all was beautiful
The room, filled by the morning, was airy and light
but the shadowy space left within me
when I was drained
was made all the darker
for the brilliant light
and the new green that basked within it

Tags: Poetry
← I am my ancestors’ wildest dreams
መብራት/ mebrat/light →