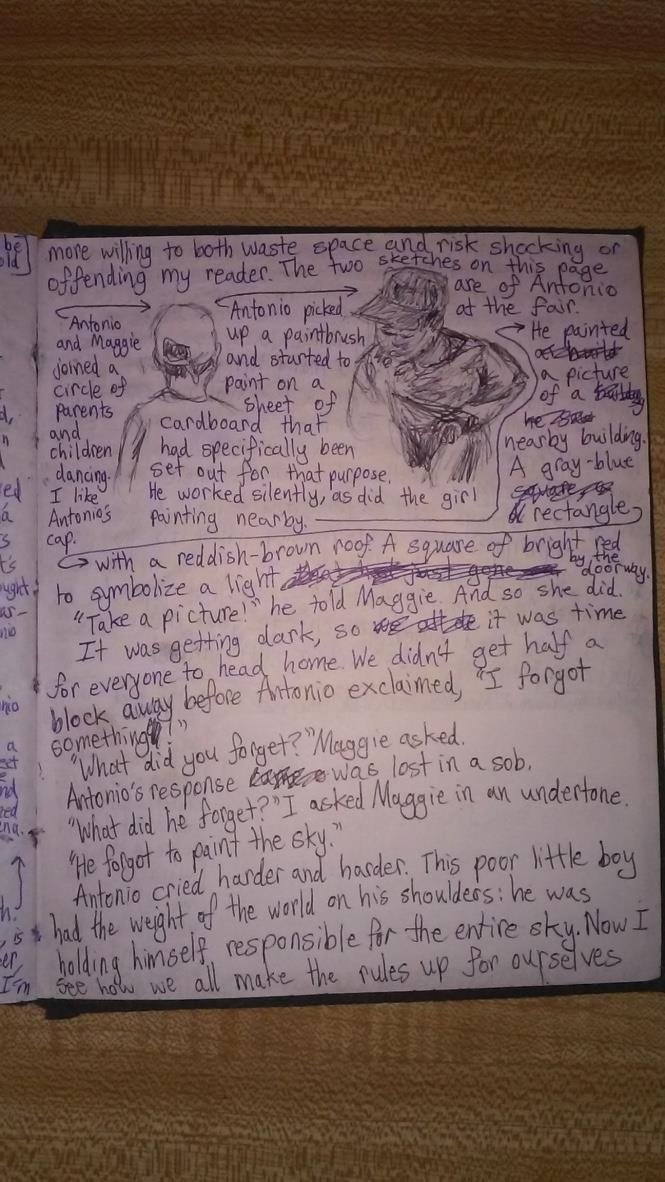 I lived in Paraná, a small city in Northern Argentina, from March to November 2017.  There, I taught at the first teacher’s college of Argentina.  Here are a few entries from the diaries I kept during this period.

I just lost at Monopoly.  I swear, at 11 years old, Julieta is a business genius.  I landed on Avenida Virginia, where she has a hotel, not once, but twice.  Juan is saying that he’s lost too, but Juli’s insisting that the game go on to the bitter end (although in this case, it’s the good kind of bitter, like mate amargo[1], the kind of bitterness you want to savor because it’s shared with warm and wonderful new friends).

[1] A traditional drink consumed in Argentina, similar to tea. 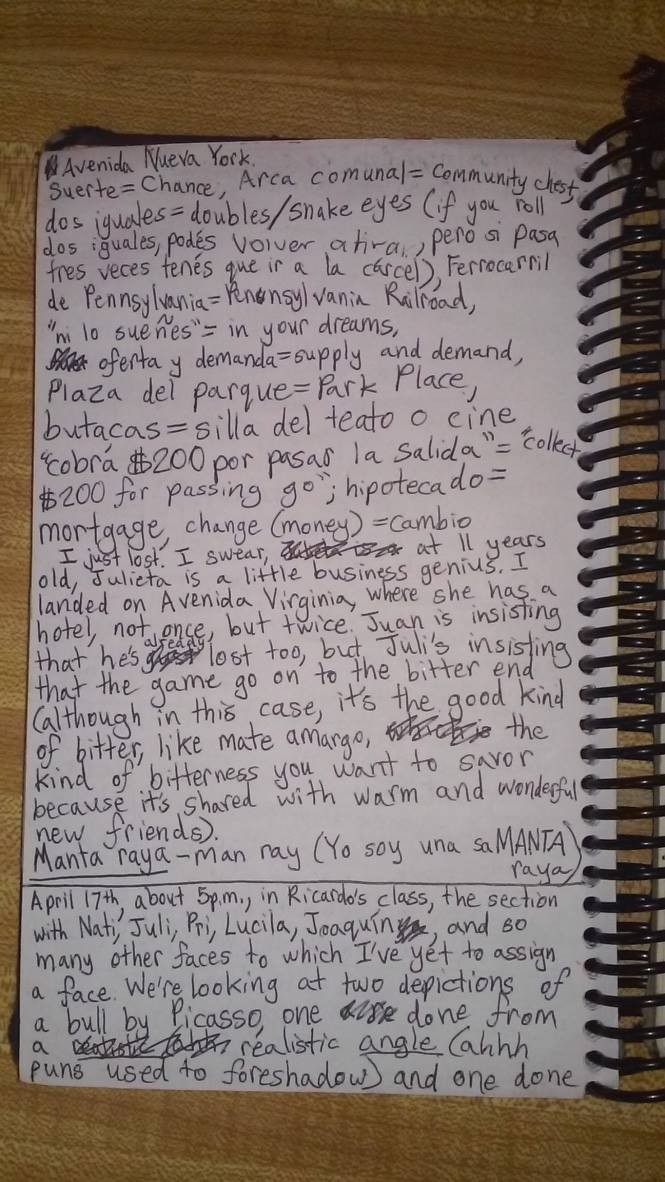 Sitting in Emi’s living room, since the power was out last night.  Emi is one of my students at the English Professorship Program

My first impression when we got off the bus was that the neighborhood was quiet and dark.  We walked up Emi’s block until we reached a black wire gate.  Emi unlatched something at the top.

“Our home security system.  The latest technology.”  A little front yard with so many potted plants.  A huge cluster of bright orange flowers on either side of the front door.  Emi unlocked the door, then stepped back to allow me to pass first.  But the door only opened halfway before making contact with the rear of a blue and gray motorcycle that was, and still is, parked in the living room.  I squeezed between the bike and the coffee table to make my way to Emi’s mom, who was standing in the hallway in a long nightgown, ready to greet us. 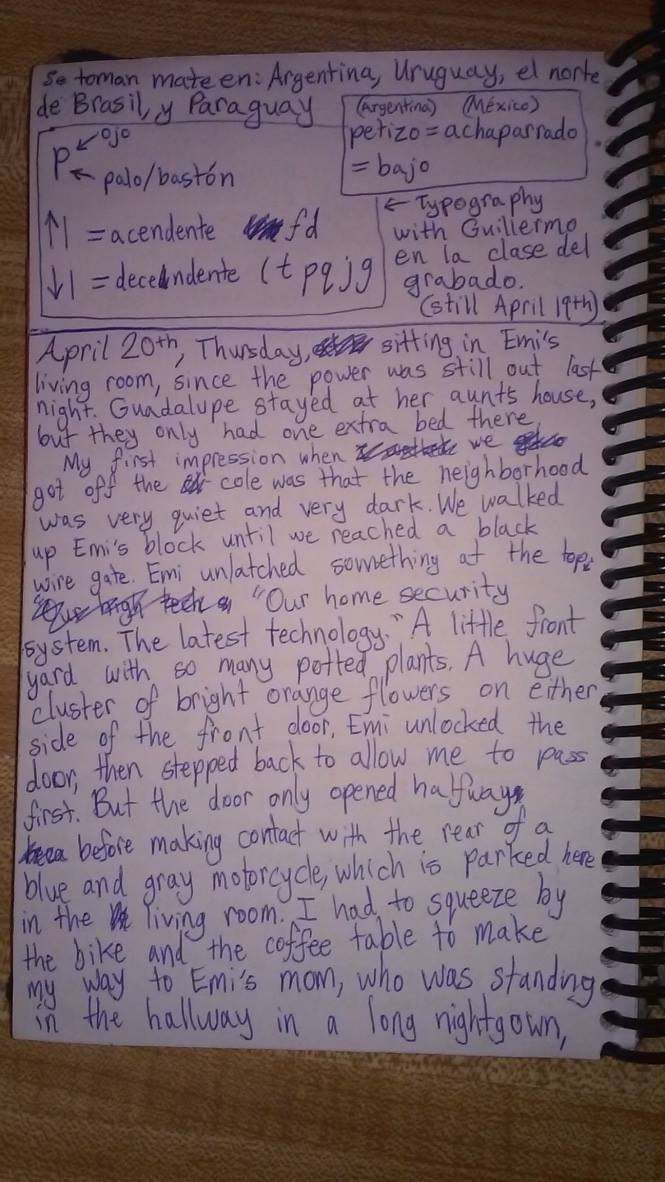 It’s a little after seven p.m. and my roommates and I are shopping for clothes.  This store has a hallway layout, with white walls, a gray tile floor, and a splash of bright red at the very back, where four curtained doorways lead to dressing rooms.

Caro was trying on a pair of shiny black leggings identical to a pair she saw at Fresia in all but price: they’re cheaper here.

Caro emerged from the dressing room with shoelaces trailing on the floor.

Dresses in shiny polyester, in black lace, in velvet.  Floor-length skirts with a slit going down one side.  A pair of something that starts as shorts and turns into fishnet tights partway down.  Guadalupe oohed and aahed over that particular article. 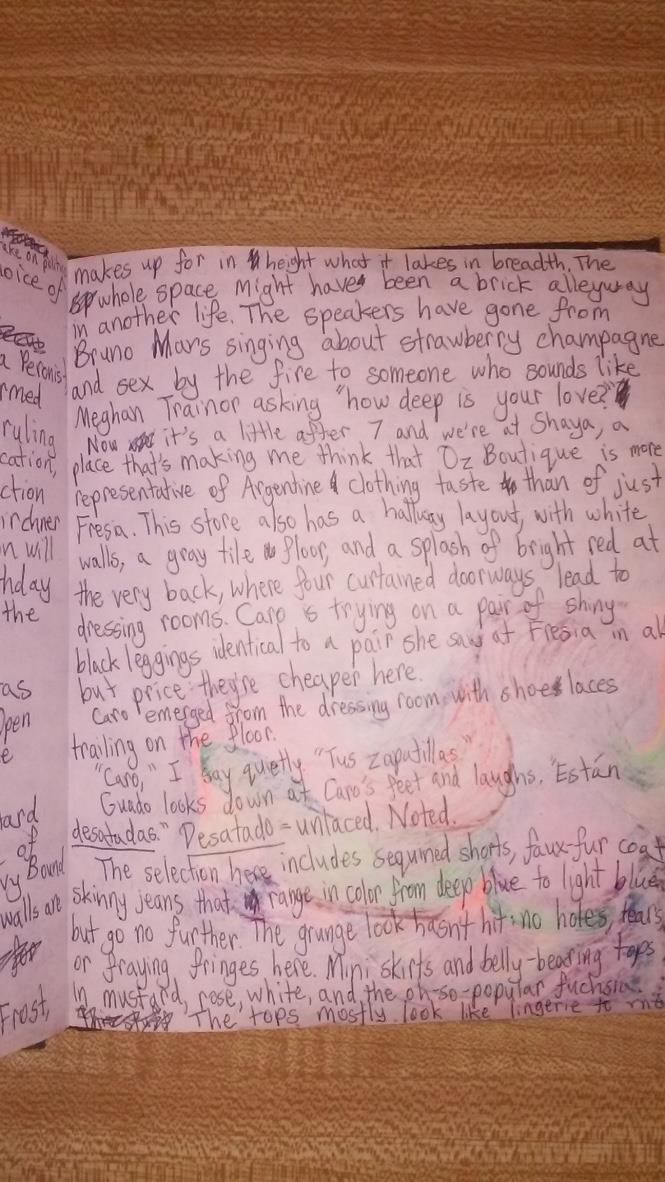 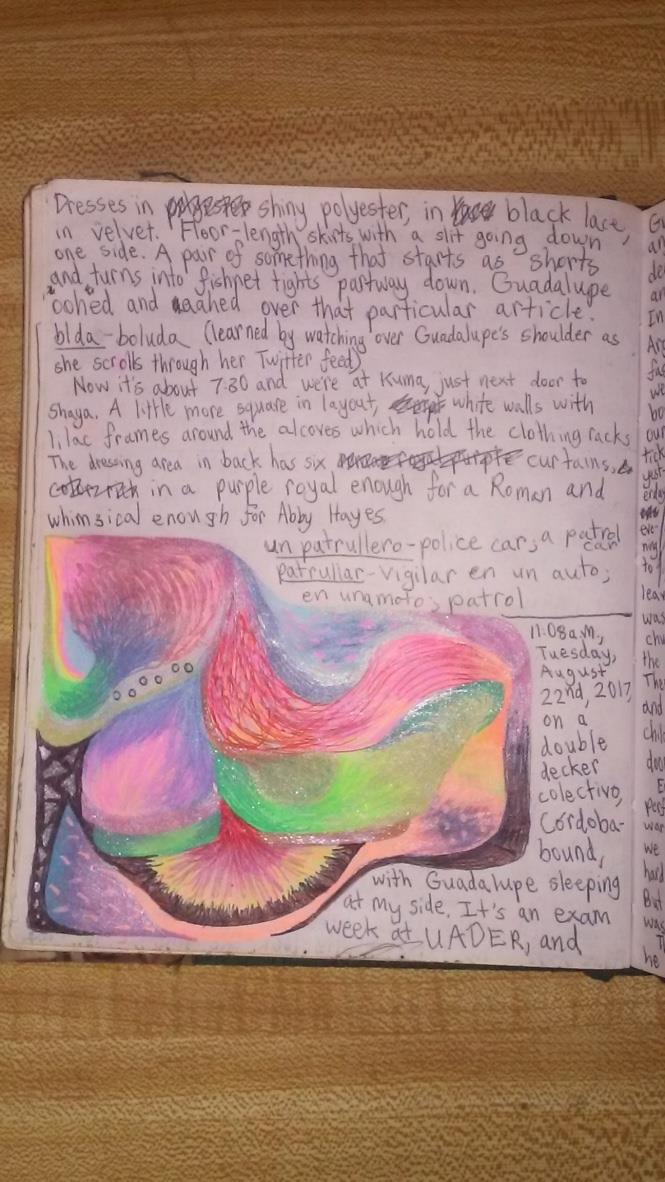 A few weeks ago, I met Maggie, a Massachusetts native who moved to Paraná six years ago.  She and her husband, have a five-year-old son, Antonio.  This evening Maggie, Antonio, and I all went to a street fair.

Antonio picked up a paintbrush and started to paint on a sheet of cardboard that had been specifically set out for that purpose.  He worked silently on a picture of a nearby building.  A gray-blue rectangle with a reddish-brown roof.  A square of bright red by the doorway to symbolize a light.

“Take a picture!” he told Maggie.  And so she did.

It was getting dark, so it was time for everyone to head home.  We didn’t get half a block away before Antonio exclaimed, “I forgot something!”

“What did you forget?” Maggie asked.

Antonio’s response was lost in a sob.

“What did he forget?” I asked Maggie in an undertone.

“He forgot to paint the sky.”

Antonio cried harder and harder.  This poor little boy had the weight of the world on his shoulders: he was holding himself responsible for the entire sky.

Now I see how we all make the rules up for ourselves about what matters and what doesn’t.  An entire notebook can be filled with inanities and a little boy can forget to include the entire sky in his painting.  There’s room in the world for those kinds of presences and those kinds of absences. 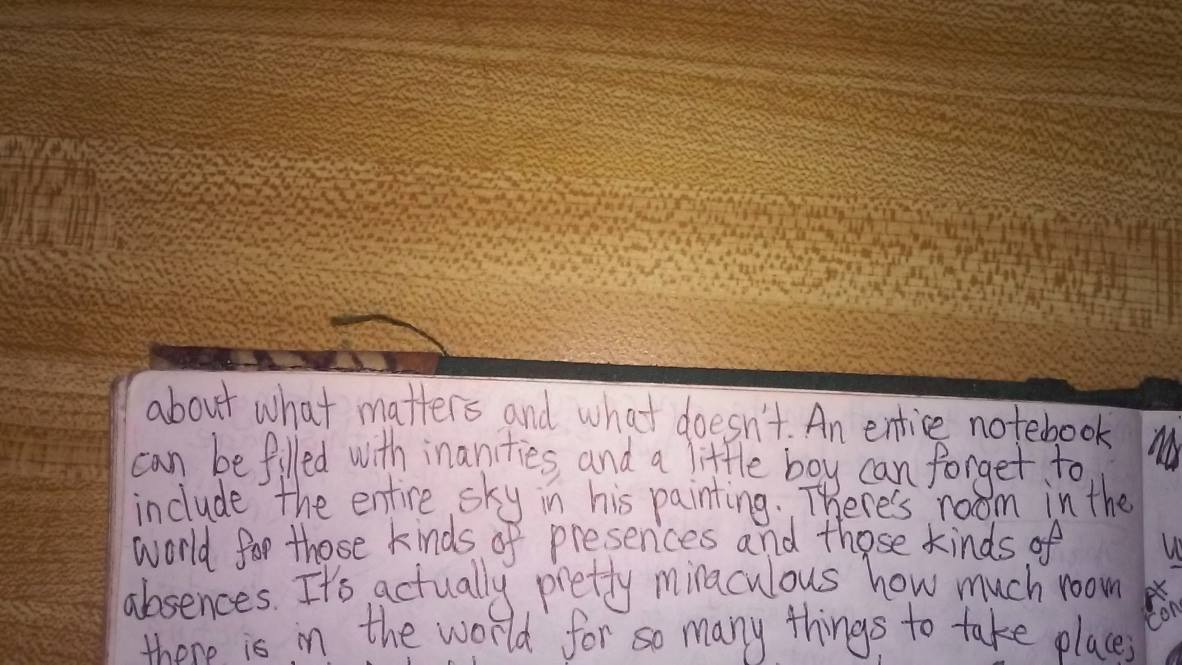 Samantha Steiner is the founder of Paraná Please, an online community of English-speakers living in Paraná, Entre Ríos. You can find it at www.paranaplease.wordpress.com.