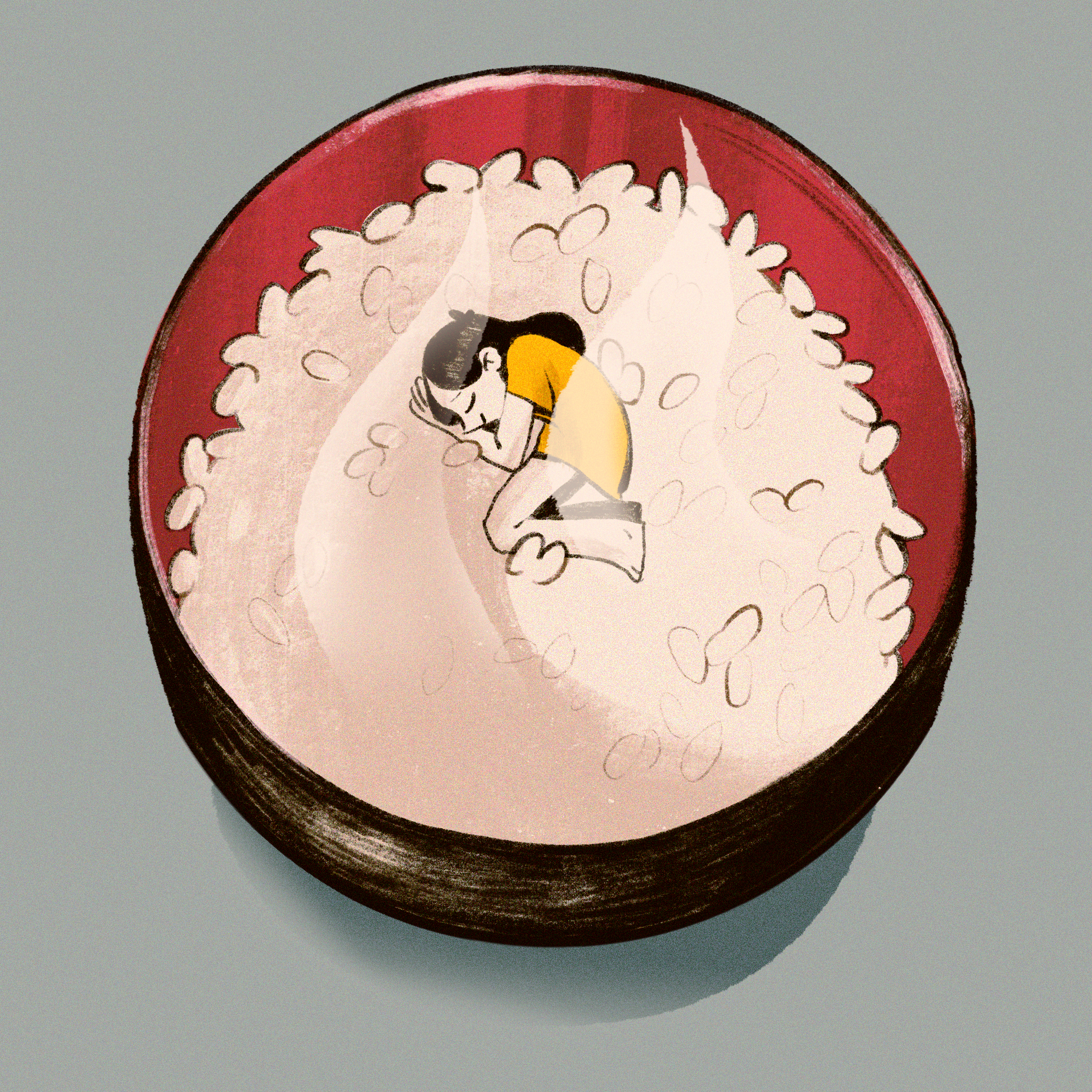 The eggplants are coated in a layer of dough, mixed from flour and eggs, after being chopped up into pieces that are about the size of two or three full, green olives placed side by side. I cannot remember if it was my grandmother on my mom’s side or my dad’s side who taught my mom to cook eggplants this way, but it’s always been one of my favourite dishes growing up. The eggplant coated in this soft, absorbent doughy mixture is deep fried before being stir-fried with green bell peppers, tomatoes, soy sauce and garlic if somebody likes garlic, so that the resulting eggplant tastes not so much like eggplant but almost like a kind of meat, perhaps braised pork. The initial eggplant taste is overwhelmed by a complex and aromatic fusion of other tastes, of meat broth, warm dough, and bell peppers, so that a rich blend rushes up and fills your palate.

The soft mushy texture of eggplant still remains, although only partially, because of the soft shell of dough that envelops each piece of eggplant. The doughy exterior is personally my favourite part of the dish—it is the touch that makes it special. It provides the soft touch of dough that somehow always manages to be comforting and reassuring—because dough will always be dough, won’t it? It’ll always have that gentle resistance to your bite, but even as your teeth feels the resistance you already know that it will inevitably yield and let you have your way, subsequently filling your mouth with the richness of the flavors it had sealed within itself. After you get through the doughy exterior, you reach the actual eggplant, but its existence within the dish is so subtle and so modest that if you are not careful, you might just miss the fact that it is still there. It seems that in this dish, the eggplants are really acting as a placeholder, or a medium upon which the other flavors are allowed to ride. In other words, the dish is not about the eggplants, but about the tastes of all the other ingredients that the eggplants facilitate in bringing to life.

The grains of rice are white and soft. Like dough, rice is comforting because of its familiarity. You can always count on rice to be rice—well, that’s what I thought before I started traveling abroad more in any case. What I mean is, of course there are many different types of rice; for example the rice used in Indian cuisine has grains that are longer and slimmer in shape, and collectively do not stick together as much but instead maintain a smooth exterior, whereas Japanese rice sticks together even more and is even softer than Chinese rice, but throughout China you can mostly count on rice to be the same. I remember once when traveling within China with my family, we encountered a meal where I wasn’t sure the dishes really agreed with me, so I was eating rice most of the time. It is rather unusual to eat plain rice without any accompaniment in Chinese meals, so my parents and other elder relatives asked me why I was only eating rice, and I told them with a smile: “because you can’t go wrong with rice.” The grains have a plain taste, but do not be mistaken, plain does not mean the same thing as bland. They are plain in a way that is attractive in its simplicity, and heartening in its fullness. It will meekly yet faithfully accompany a bite from any other dish, willingly taking second place to its flavor without complaint or resistance. Its role is solely to complement, to enhance, and to accentuate the flavors of other dishes on the table. It may not be flamboyant in the tastes it has to offer, and yet it is indispensable, because it lightens and dilutes the stronger tastes by just the right amount so that those other flavors may be savored in a subtler manner, so that their nuances may be brought out instead of being obscured by their own intensity.

The chicken soup possesses a golden glow. It will neutralize the chaos of all the tastes fighting each other in your mouth by the end of the meal, and replace it with a taste that is at once wholesome, calming, and satisfying. And thus, with a gentle swallow, the golden liquid glides down your throat, and completes your meal with a glow of warmth diffusing within you.