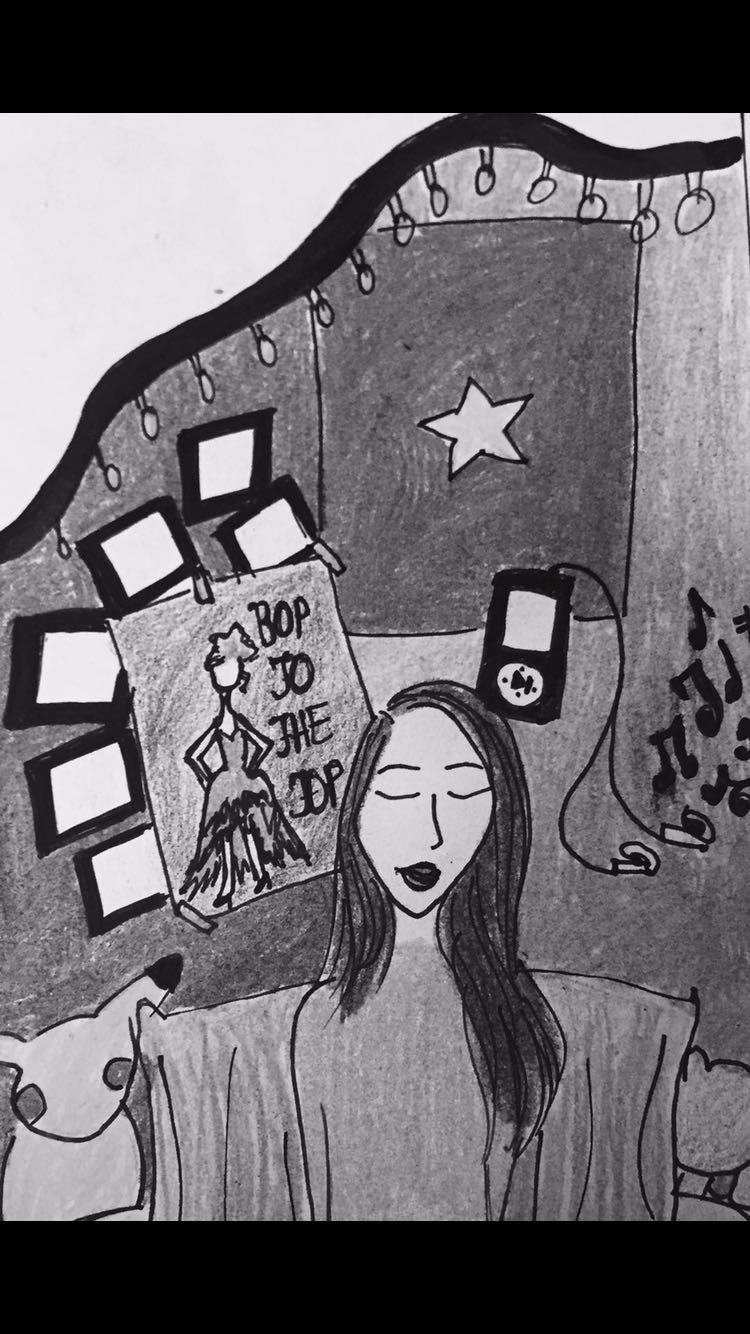 By Anonymous. Art by Maheen Syed ’19.

When I was eight, my bedroom was white. It smelled of paint. It was empty; it was idle, unwanted, unpopular. The only moments in which it received attention were when its owner was curled up, horizontal, tucked away for nine hours in a world of clouds, fantasies, legends, and adventure, a world of hopefulness, confidence, doubt, thrill, and fear.

I hadn’t been able to find tape strong enough to keep my pictures from falling off the walls, so they were left to their own devices, in the top drawer of my dresser. There was the one of me and my mom the day Vietnam won the AFF Championships. There was the one of second-grade me, Julia, and Alexandra telling a clearly bored audience of elementary schoolers about Greek mythology (the part where I threw a mini tantrum because I forgot my lines was conveniently not photographed). There was the one of me, Nhu, and Quynh learning to ride bikes for the first time.

My friend Fran, the eight-year-old self-proclaimed poet slash insult master, came into my room one day. What a bland, boring place, she quipped, that reflects its owner’s taste. Fran high-fived herself. I laughed nervously, softly, pensively.

When I was ten, my bedroom could have been a one-stop shop for all things High School Musical. Posters of Zac Efron plastered the walls (even though I thought he was overrated). A printout of Sharpay and Ryan belting Bop to the Top was stuck to my wardrobe, because the song’s motto of perseverance was, of course, the most inspirational thing I had ever heard. And, more importantly, because Ashley Tisdale was my idol, for she was obviously so cool, so incredibly talented, and, conveniently, ticked every box on the checklist of the only beauty standards to which I had been exposed for most of my life.

On top of my dresser was a white iPod, which contained exactly thirty-six songs. Most were from High School Musical 1 and 2. There were also four K-pop songs, two by the Wonder Girls and two by Girls Generation. In my top drawer was a printout of Cole Sprouse, who I thought was way cuter than Zac Efron but was too embarrassed to admit that to anyone.

By the end of that year, the K-pop obsession had completely eclipsed High School Musical. I sat at the end of my bed and sent an email to JYP, the Wonder Girls’ manager, asking if he was recruiting new talent and detailing my passion for singing, dancing, and other skills that I thought I had completely mastered. I learned the dance to “Tell Me” and showed it to my aunt, who laughed and told me to focus on my studies.

When I was twelve, my bedroom had cards — leaving cards, thank you cards, birthday cards, Christmas cards, joint-Christmas-and-birthday-cause-your-birthday-is-in-mid-November cards. There was one depicting two peas in a pod that said “Ha-Pea Birthday.” There was one with two Christmas tree ornaments that said “I like hanging with you.” There was one with a cow saying “moo-chas grass-ias,” which, to my twelve-year-old self, was the absolute punniest and most well thought out joke anyone of any age could have ever come up with.

On top of my dresser were two cards that I was in the process of writing.

I had changed schools just the year before, and held desperately, perhaps crucially, onto the belief that these cards containing heartfelt written words from my old friends and the memories, the warmth, the safety I enjoyed reading them would be the cure-all to my gnawing, searing loneliness. I thought that I could build a mighty, magical wall of cards that would safeguard me from the slurs, the jeers, the raised eyebrows that came my way every now and then because I was Minh Thu Pham instead of Anne Smith or Kate Miller or Charlotte Johnson.

When I was fourteen, my bedroom was a product of three entire days spent on Pinterest seeking inspiration; so, naturally, it resembled the bedroom of an Insta-ready, leggings-wearing, Ugg boots-owning, acai bowl-obsessed teenage girl. I didn’t have Instagram. I found leggings uncomfortable. I thought Uggs weren’t warm enough. And I had never tasted an açaí bowl. I also mispronounced açaí, and continued doing so for the next four years.

Compliments about how aesthetically pleasing my room looked constituted a not so insignificant part of my self-esteem.

When I was sixteen, my bedroom was filled with iGCSE notes, flash cards, binders, and textbooks. There were scattered pages detailing the differences between alkanes and alkenes. There was a note written in Sharpie about how writing “the mitochondria is the powerhouse of the cell” would not earn us full credit. There was a copy of the Aeneid: Book XII, an old edition of Pride and Prejudice, and a Spanish vocabulary book.

Later that year, some girl made some under-the-breath, overtly offensive comment, but, by then, I had already moved to Southern California. I unfollowed her on every form of social media and went back to studying for the SAT.

When I was eighteen, my bedroom was shared. My roommate loved applied math and economics, almost dressed up as a Whole Foods bag for Halloween, and was a great listener and late-night conversationalist.

Because it obviously couldn’t be that difficult to be a responsible, organized, always-put-together, early-rising college student, I resolved that, on every school day for the next four years, I would plan out my outfit for the next morning, go to sleep at eleven, wake up at eight, and spend fifteen minutes on my makeup. This arrangement lasted a grand total of three days.

By the end of the year, waking up for my 1pm computer science class had become an arduous effort. Yet, every day, I would still take time to do my makeup; the blemishes, scars, discolorations, and craters had to stay dormant beneath layers and layers of feigned confidence.

When I was twenty, my bedroom felt like home. There were two fans that were still used throughout the winter. There was a poster of Gustav Klimt’s The Kiss. There was a sizeable Vietnamese flag, a sizeable Dominican flag, and a sizeable, though folded up, Vatican flag. On my bed were Pikachu, Bulbasaur, and the pig from Moana. There were four copies of the do’s and don’ts of different countries in ASEAN that my boyfriend and I had picked up at the Bangkok airport over the summer. The room had no color scheme; it was not inspired by Pinterest or Etsy or Tumblr. But it had a persona of its own: colorful, eccentric, goofy, sometimes a little careless.

In an almost hidden corner of my dresser, a makeup set was gathering dust.