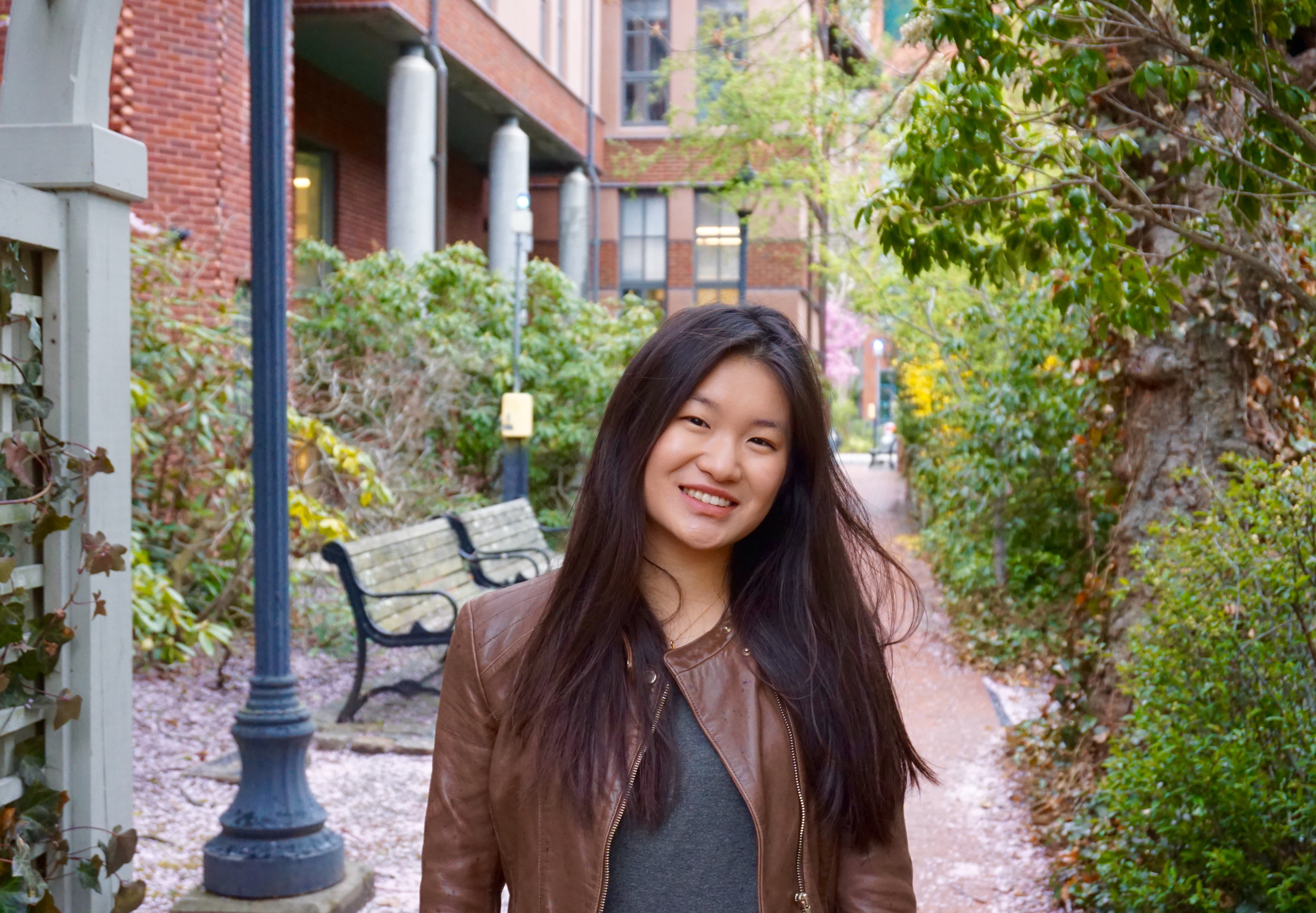 In this edition of International Humans of Brown, our very own Lily Zhao (who has been editor, writer, and illustrator throughout her tenure at IWB) sat down with Edwin Jeng ’18 to share her thoughts and experiences as a graduating senior. An Economics, English (Nonfiction Writing), and Visual Arts concentrator, Lily has lived in Beijing, Vancouver, Shanghai, Xi’an, and Guangzhou, and now adds Providence to that list. Read on to find out what she wishes she knew as an international freshman deciding between concentrations, why she still doesn’t cook, and where her favorite spots in Providence are! 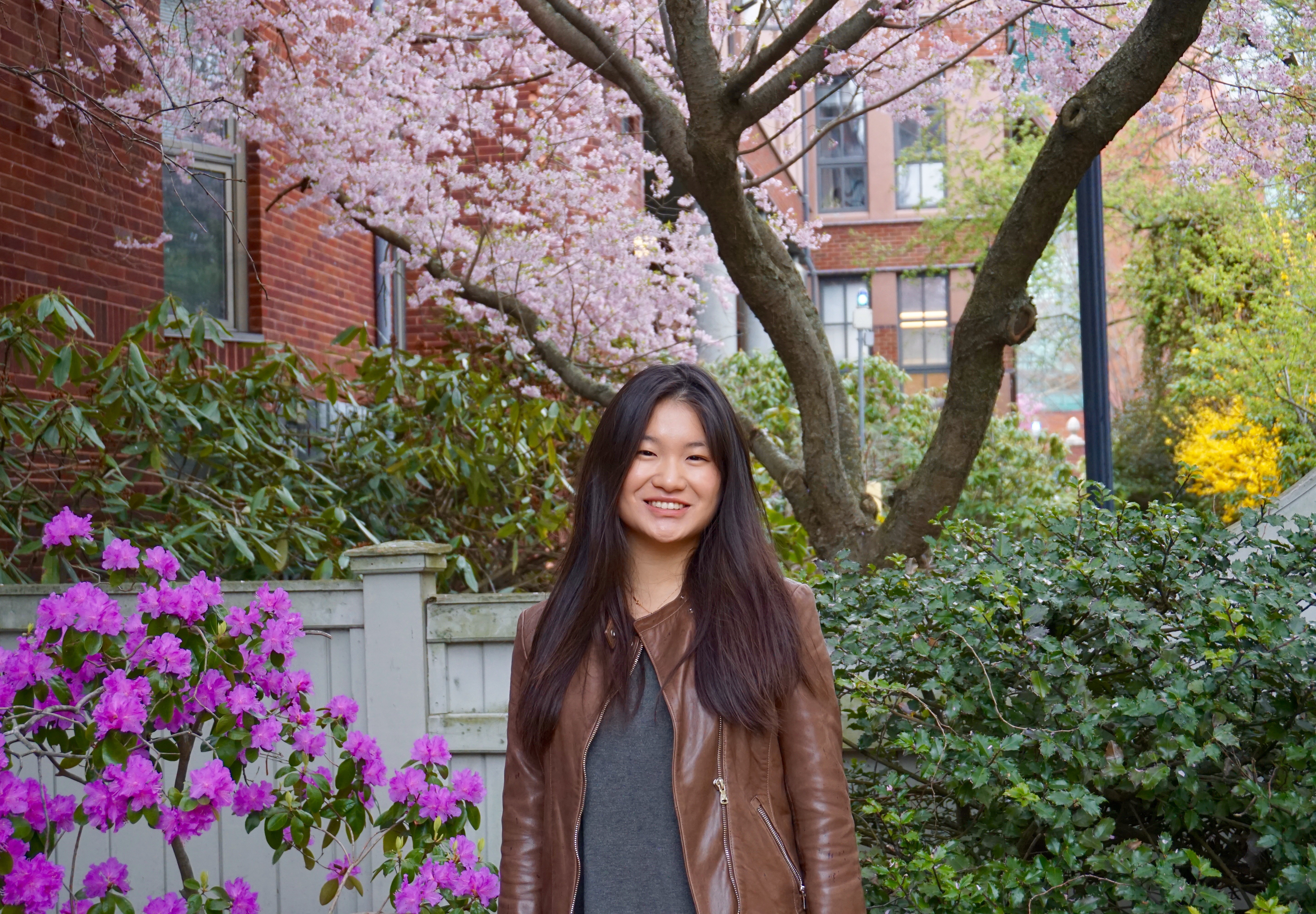 What student groups have you been involved with at Brown?

This is going to take a long time! It kind of evolved over my four years, so I left things and joined other things. But I would say the ones I’ve spent significant amounts of time and effort on are probably Model UN and the Brown Ballroom Dance Team for the first two years. We went to a lot of competitions and practiced a lot. For Model UN I was involved on the secretariat for BUSUN (the high school conference) and for BUCS (the college conference). I also did salsa and I’m involved in the IWB. I’m an editor for FFK (Fiction for Kids), a Brown and RISD organization that produces personalized books for children. I was in SPEC for freshman year. I was in BEAM for my junior year, which was very interesting and time-consuming because I had to take the bus to Olneyville and back. One other major thing is the Chinese Students’ Association (CSA), which I was involved with for two years, starting junior year.

I feel like in a sense that wasn’t my decision; it was more like my parents made that decision from a very young age, and that was the path they set us on and we just walked down that path. It kind of makes my parents sound like masterminds, but children’s parents choose their educations—one of the jobs that a parent has, I guess. I went to elementary school in Canada, and then when I went back to China my parents put my sister and I through a bunch of international schools or bilingual schools. I would say 95% or more of the people who graduated from my high school—an international school in Beijing—went abroad for higher education. It was a really small high school with a total of maybe 500 students, so my graduating class was only like 110 students. I would say over half of the students went to the U.S. for college.

What did you find to be the easiest and the most difficult things to get used to?

I think the easiest to get used to was probably… I remember walking in Keeney freshman year and there were these posters saying, “if you’re homesick, there are resources to help,” and I often had conversations with other students, who in the early weeks of college would always greet you and ask you where you’re from. Whenever I said I was from Beijing they would be like, “Wow, that’s so far away, you must miss your family so much or your hometown so much!” And it was always awkward for me because I didn’t, but that wasn’t the appropriate response (laughs). So sometimes I would be like, “Yeah!…” I think I didn’t miss home that much, not because I don’t love Beijing and obviously not because I don’t love my family, but just because I’ve always been an independent person growing up and because I moved a lot growing up and changed schools like every two or three years; it was easy for me to adjust to a new city.

Hardest part was probably getting used to the food. Because when you’re at home and you’re in high school your parents prepare meals for you every night and you don’t have to think about it and you just sit down and eat it, you know. But coming to college, I actually had to consciously think about feeding myself. And I really didn’t like the Ratty; I liked neither the Ratty nor the V-Dub, so I ended up eating a lot of food from the Blue Room. This is going to make me look really bad, but I had over 200 credits left at the end of freshman year; I had no idea how to use it, I can’t eat that many meals a week, and I just didn’t find the Ratty very appealing. I think there’s a dearth of vegetable options, like cooked vegetables; I’m not really a salad person, and at least back home with Chinese cuisine there’s a lot of variety in the types of vegetables and how they’re cooked. But over the years in the U.S. I’ve gotten more amenable to eating salads.

I think anything that my parents make. Because my parents are both really good cooks; my mom is from Xi’an and my dad is from Shanghai. They represent different kinds of cuisine within Chinese food.

It’s probably because they were such good cooks that I was never interested in cooking, myself. I still don’t cook.

I think my diet has become a lot more diverse, because in terms of cuisine, obviously in big cities like Beijing and Shanghai you can get any type of food, but in terms of the average person’s diet it’s more homogenous, like people will have Chinese food most of the time. But after coming to the States, I’m just eating a lot of different types of food. For example, before I came to the States, I never had pho. And now I really like pho.

And in terms of linguistics, I swear more now. Before I came to college I rarely ever swore; I was very clean-mouthed. But now I definitely swear more. Also I never used to say things like “Are you down?” Or also like, “For sure”. I picked that up after coming to Brown. I guess just little things.

And also before I came to Brown, if someone asked, “How are you?”, I would respond, “I’m OK, I’m fine” and that would be considered a positive response—because OK means you’re OK, everything is fine, nothing terrible has happened to me today, but also nothing extraordinary and amazing either. But here in the States if you say you’re OK, people will be like, “Oh what’s wrong, what happened?” So now I often say, “I’m great!” or “I’m amazing!” (laughs). I don’t actually say “I’m amazing”, that’s too much.

I wish I knew more about the work authorization process for international students. I wish I knew a lot more about OPT, CPT, STEM extensions—what concentrations qualify and which don’t. By the midpoint of my sophomore year I had this realization that I had a stronger preference towards gaining some work experience in the States, but at that point I was concentrating in Visual Arts and English, and those are very hard fields for international students to compete with domestic students in in terms of getting a job offer, never mind work authorization. And even if you were to get a job offer and work authorization you would only have one year to work. In a lot of ways that was a huge disillusionment for me, I guess, and induced a lot of panic, because I’m a type A person who wants to have everything planned. I think I could have made a better decision; I think it would have helped me to have that information when I was coming in as a freshman. I know all of that information is available on the OISSS website and if you go looking for them. But you can’t know what you don’t know. So first someone has to tell you that this is something you need to know. My recommendation would be to incorporate this as a substantial portion of the international orientation. I think Brown has done a lot, and over my four years I’ve seen a drastic increase in awareness for offering a more comprehensive support system for international students and the difficulties that they face as a cohort. 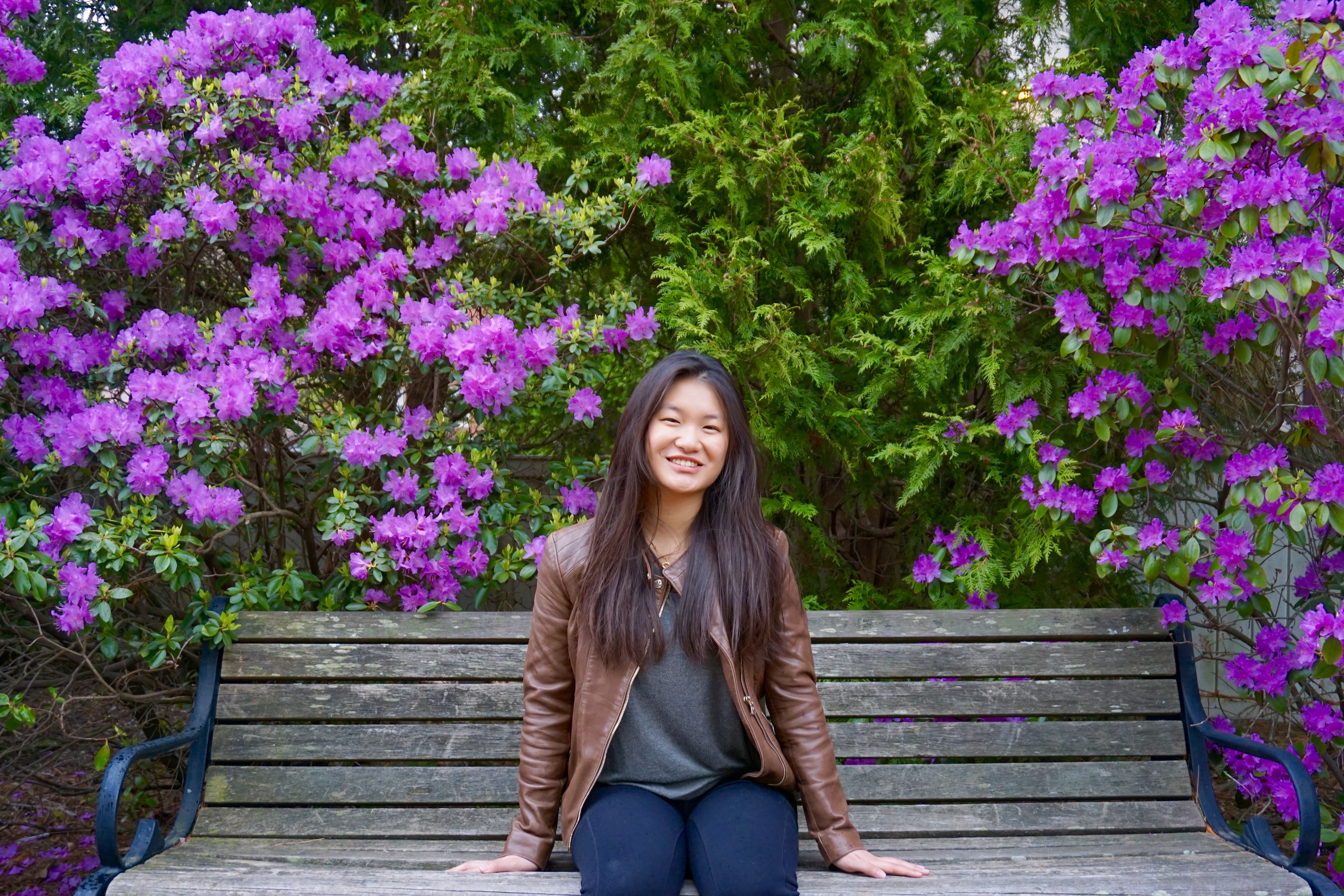 How has living here changed how you act/interact at home, if at all?

Within my nuclear family, not that much. My sister and I speak English to each other and Chinese to my parents, because my dad doesn’t really speak English. But I think within the greater culture of contemporary China as a whole, I think people see me as more foreign. And that’s not something that I’m consciously trying to put out there, and I would even say that it’s actually undesirable to me, because I do identify as Chinese and I want people to see me as an insider when I’m Beijing. But taxi drivers and people out on the street often look at me or have conversations with me and immediately assume I’m foreign-born, and it’s not because of anything that I’m consciously doing, but rather because of some kind of cultural aura that they pick up on—which I understand, because I think engage in that kind of categorization too. I’ve actually asked someone, “What is it?”, and they said, “It’s your accent, your gestures, your demeanor, your hair, your dress, like a lot of these different subtle things.” Maybe that was always the case, because I was always in kind of an international bubble, but I think that has been exacerbated.

What is one thing you are going to miss about Brown? Best memory?

I’m going to miss… all of you guys! I mean, this is such a cliché answer, but obviously I’m going to miss my friends the most. But in terms of Brown itself, I think I’ll miss the campus because Brown has a really beautiful campus; the red brick buildings, and the Green, the public sculptures, Thayer Street. I think the physicality of the campus, that kind of collegiate, friendly academic atmosphere, will be what I’ll miss.

I like a number of the coffee shops, like Blue State Coffee, Coffee Exchange, and Dave’s, because they’re all kind of cozy. I actually really like the 4th floor of the Rock because you get a very good view, even though the windows are those long slits, if you sit on the side that’s facing down the hill, you get a really good view of the church steeple of the First Baptist Church, and also you can see the State House, and depending on where you’re sitting you can see all the way to Kennedy Plaza. And often if you go into the stacks you’re there for hours, so you can see the lighting change—you can see dusk, you can see sunset, you can see it get dark. So I think that’s nice, because if you’re working, and every now and then you take a break, you have something visually interesting to look at.

What is your favorite Blue Room pastry?

Blueberry scone. Without a doubt. I was addicted to that freshman year. I would eat one every day.

So many new restaurants have opened; it’s really hard. Low-key restaurants, I really like Chongqing House now and Jahunger; more fancy places I really like Gracie’s. They have really good bread.