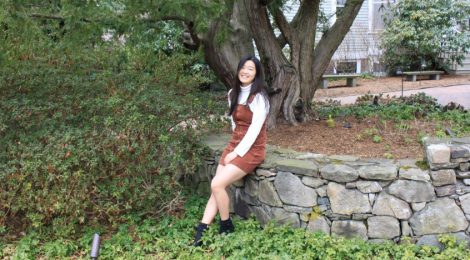 Tina Wang is a Cognitive Neuroscience concentrator who will be graduating this spring. She is a bright, friendly young woman who has tremendously enjoyed her four years at Brown. During the interview, Tina shared a beautiful, thoughtful reflection of her experience at Brown and imparted valuable advice for younger Brown students, ultimately encouraging students to go with the flow, open their hearts, and enjoy the journey through college. Please continue reading this interview to learn about her Group Independent Study Project, her favorite spot in Providence, and how living her has changed how she acts back home in Singapore.

I was born in Finland, which is not people’s first guess usually. I moved to Singapore when I was six, so I’ve lived there most of my life.

What is your concentration?

I speak English and Mandarin fluently, and I just came out of German 0400, and I used to speak a lot of Korean.

I have played for the Brown Women’s Club Volleyball team for four years, and I was the publicity and outreach coordinator at IWB since freshman year, but retired this year. I was also the president of the Singapore Society here for a year, sophomore year. I am a Meiklejohn here as well, advising First-Years.

I think, as I’m sure a lot of other people must feel, it was my indecision that brought me here and not wanting to narrow down to one specific field. I wanted the avenue to explore anything I wanted with the Open Curriculum. That was such a big decisive factor for me because I didn’t know at all what I wanted to do. I initially came in BioChem, and at any other school I would have probably stayed BioChem and not been able to take classes in the 18 different departments I’ve taken by now. I went all out.

How have your four years here been different than what you have expected?

I don’t think I came in with any concrete expectations, but I expected to have a good time and meet really cool people and learn a lot and pursue different intellectual curiosities, which I definitely have gotten to do. I was in a lucky position where the transition to college was pretty easy and I have the privilege of not speaking English with an accent and being able to blend in more easily culturally. The cultural shock aspect wasn’t a huge issue for me to deal with. I came in expecting openness, and I feel like I’m leaving having taken advantage of everything available to me.

What did you find to be difficult to get used to?

The weather was hard to get used to — Singapore is really hot all year, and I had to buy an entirely new wardrobe for fall and winter freshman year. I’m still adjusting to the weather every year when winter rolls around. Also, in the beginning it was hard to be so far from home because I didn’t get to go home as frequently as a lot of my friends did. My friends could go home for Thanksgiving or long weekends, which was obviously not feasible for me, but I got more used to it.

I’m living off campus this year, so I’ve been trying to cook more for myself — I learned a bunch of recipes from my mom, so I can make food when I’m homesick. But one thing that is super time-consuming and difficult to make is dumplings. It’s so nice to be home and just sit and make dumplings together as a family around the table. That’s harder to pull off on my own, and I don’t really know how to make the fillings, so I haven’t really made any dumplings here, and the take-out dumplings aren’t the same.

I’ve gotten a lot better at small talk. When I first got here it threw me off when people would ask, “Hey, how are you?” and it wasn’t an actual question, it was a greeting. They didn’t expect an actual genuine reply. Even store associates would ask “How are you?” and you’re just supposed to say, “Good, how are you?” and they’re supposed to say, “Good, thanks,” and that’s how the format goes. It’s gotten so natural for me over the years now, though, even though I used to be against small talk. It felt shallow to me, like you’re not learning anything about the person, you’re just filling time, and the conversation doesn’t hold much weight. But I’ve still picked it up and find myself saying it to people back home, and sometimes it seems like they’re thrown off by it, like I was at first.

I’ve definitely become more outspoken about my views. I’m not Singaporean, but I’ve lived most of my life there, and let’s just say freedom of speech is not exactly Singapore’s forté. I’ve grown up accepting that and not challenging the status quo or the laws that have been place. That’s one thing that America has afforded me to explore and be a part of. Now I feel like I can be a part of social activism and educate myself on certain issues and be able to hold opinions that maybe people in government currently do not hold, and that’s okay. I hadn’t been to any protests or any sort of public demonstration before coming here, because they’re illegal in Singapore, and it’s been a really transformative, educational process for me. Brown has encouraged me to become more outspoken about my opinions and political standings. Singapore is a very young country and I understand that they needed rigidity and structure and the laws in place for it to develop as fast as it did, but in terms of personal involvement, it is extremely difficult to be an activist in Singapore. I’ve found myself enjoying this increased freedom here and the ability to have these discussions and discourses. Every society has issues and I think it is important to be able to talk about them, because without acknowledging the issues you can’t really address them.

What is one thing you are going to miss about Brown? Best Memory?

Well, there’s so much I am going to miss about Brown. The college experience is different for everyone, but I’ve definitely heard people say that college years are the best four years of your life, and that is definitely a sentiment I would echo. Although not every day is super fun and it’s not always stress-free, there’s going to be a lot of work and drama, there are uncertainties and insecurities, at the same time it is such a transformative place and four years. Even though it feels like it flew by so fast, I definitely feel like I’ve grown into a different, more mature, more informed, and I hope better version of myself through these four years, there’s no singular best memory, but I feel like everything has just been great, and I’m going to miss it.

There’s a little park north of Andrews called Prospect Park that overlooks Providence. It’s a little nook I found freshman year when I wasn’t going off campus as much. It’s beautiful and has been a place that holds a spot in my heart. It’s a pretty, quaint, quiet place where you can watch the sunset.

There are a few. I’m currently in a really cool class in the TAPS department called Artists and Scientists as Partners: Theory to Practice (TAPS 1281Z) that looks at the use and application of art-based therapies such as dance, theater, or music-based therapies in helping with treatment of people with different neurological disorders. Part of the class is a site-placement, so every week, depending on which section you choose, you get to join a different workshop with people in the Providence community.

One was also a GISP (Group Independent Study Project) that my friends and I made my Junior year. This was on the neuroscience of racism. GISPs are so cool because you essentially get to design your own course if it’s not available or offered within Brown. We were all Neuro/CogNeuro concentrators and wanted to look at if there was scientific grounding or brain studies on the underlying mechanisms of racism, prejudice, and how that is developed or acquired or formed through childhood and how that manifests. We wanted to look at what areas of the brain look at bias, what areas of the brain are reactive to certain situations. It was super cool and because everyone put in a lot of effort to design the course is was one of the most engaged spaces I’ve been in.

Advice for younger students? Younger self?

I think stepping out of your comfort zone is a big thing that people should be doing in college. It’s easier said than done, but Brown makes it really accessible to try new things. Even though you might be apprehensive to try new things, it’s honestly a great experience to do them. Make sure to value the relationships and the memories and experiences you have with other people over, say, a letter grade on an exam. That is something that has really contributed to making my time here as memorable as it has been. It’s great to go with the flow as well and be flexible. Be open to not following a strict plan. I think the mistakes and fumbles along the way are also a really enriching part of your journey at Brown. There is a lot you can learn from the things that you might have done as well as you’d hoped.