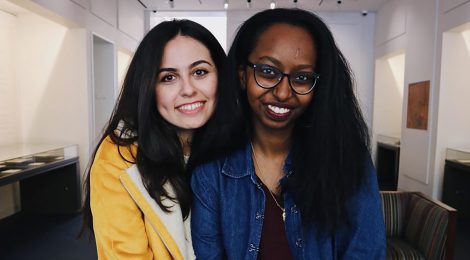 Serene Akkawi ’19 and Lydia Haile ’19 have been roommates for the past three years and it shows in the interview below. Serene and Lydia lived on the same floor during their freshman year and have been close friends ever since. Lydia will graduate with an A.B. in Public Health and Serene will graduate with an A.B. in International Relations. Continue reading this interview to learn about the memorable moments and experiences they have shared during their time at Brown.

So how’s your semester going so far?

Lydia: Pretty good! I feel like I’m not doing much this semester, which is definitely a nice change.

Serene: (laughs) Yeah, same here. I’m actually truly enjoying this semester even though I don’t play a huge role in any of the groups I was a part of anymore.

Well, even though you haven’t really been too involved this semester, what clubs were you both a part of at Brown?

Lydia: Hm, what did I do here? I did a little bit of theatre here and there, and I’m in an a cappella group. I used to write for the Blog, I’m involved in Christian Union and the Orthodox Christian Fellowship….what else? Oh, I’m also a tour guide and was a public health TA. I think that’s it.

Serene: Wow, I am just realizing how long I’ve been at Brown for — trying to just recall groups is more difficult than I thought! Well, freshman year I was a part of Students for Justice in Palestine and the Brown-RISD Catholic Community. I also first joined [email protected] then as a writer. Sophomore year…? Honestly, it’s all a blur.

What made you decide to come to Brown?

Lydia: (laughs) That’s really weird to think about now, because all of that feels so long ago. I wanted to go somewhere super far away and where I could still get a good education. Even though I never visited Brown before coming here, I always heard great things about the open curriculum. Brown seemed to be the right place for me with smart, interesting people who would constantly challenge me.

Serene: :Because they accepted me! Honestly, Brown really chose me and I had no idea what I was getting into. I mean during freshman orientation I asked my roommate what classes we were supposed to take as freshman and she looked at me utterly confused and dumbfounded that someone at Brown did not know about the open curriculum. Retelling that story now sounds more sad than funny but moral of the story is that I knew absolutely nothing about Brown but am unbelievably happy that I made it here.

Where is home for you?

Serene: I was asking Lydia something related to your question that other day. I asked her, ‘If you did not know that my family was from Jordan, would you think that I am an American or from where?’

Serene: Yea, I was born and raised in Chicago, so I am an American with an American passport, but I think that honestly I feel more Jordanian. It is a hard thing to explain. I feel like a lot of people have the same sentiment of being torn between two places, but I don’t feel that way. I feel that I am a Jordanian living in America.

Lydia: I’ve lived in America my whole life, so I am definitely not international at all in that respect. I haven’t traveled to Ethiopia that many times. The first time I went was at the age of five. It is not very difficult to reconcile two identities for me. When Serene asked me that question, I really did not know how to answer it.

Serene: You said that you would think that I was Hispanic!

Lydia: I felt that you seemed to be coming from a strong culture. For me, I grew up in Las Vegas, and a lot of people around me grew up somewhere else or their parents grew up somewhere else so I did not feel that different from other people. I felt more out of place when I came to Brown since there weren’t that many people like that.

Serene: In Chicago, there is a huge Arab community. I went to church in Arabic, and my grandparents, uncles, and aunts mostly spoke in Arabic. My family created a mini Jordan in Chicago. And then I went back to Jordan for high school, at Deerfields’ sister school, I was living in what felt like a mini America in Jordan. What I am trying to get at is that globalization is a real tangible thing – I have had the best mansaf in Chicago and the juiciest burger in Jordan.

What is your favorite building on campus?

Lydia: I like the new building of Barus and Holley, because it is very minimal and kind of transparent. I like that it is simple and functional. It doesn’t need anything special or fancy to stand out.

Serene: I like the Chandelier room in Page-Robinson. The room is very transparent with windows all around. It’s so pretty. I have a Spanish class there, and it is my favorite class partially because of the room.

What have been your biggest struggles at Brown?

Serene:I don’t know if this is unique to Brown, but I found it a bit difficult to find or create my own community here. Maybe its because I am not a huge party person or because I prefer to study in my room, but it took a lot of effort for me. And even after you find those few people, it still takes a lot of energy and time just to see them and it definitely felt a bit unnatural to have to g-cal time with friends.

Serene: Sometimes my friends say to me that I never follow through on our plans to meet up, and that was definitely so. One of my biggest struggles is “being a flake,” because of the time and energy that has to be put in.

What will you miss most about Brown?

Lydia: Having all your friends in the same place and being conveniently available. Those are things that we will never have again. After we graduate, everyone will be in different places around the world.

Serene: One thing I will miss about Brown is the freedom I have with my schedule. I love being able to take a nap and not having to be sitting at a desk for hours. I also love being able to talk about any topic with anybody at Brown. People are willing to get political (sometimes) or not get political and just be silly and stupid. Post-Brown, I feel that perhaps people will be very professional in their interactions or too serious about work.

Serene: I wish I had done one of the pre-orientation programs at Brown. All the people I know who did them have had really good things to say about them, and some have even met their closest friends through those programs. It’s overwhelming to come to Brown and not know anyone. Joining a pre-orientation program seems makes that transition process a bit easier.

Lydia: I wish that I knew to relax freshman year. I did not have a life at all freshman fall. Nobody ever saw me because I was in a single and I was studying for my classes all the time. College is actually a very different environment from high school, and I did not feel super prepared. In high school, everything was about studying and having a social life wasn’t as important as getting into a good college. I was studying all the time during my first semester here just like in high school. I think freshman year is such an important period to meet new people, to have fun, and to adjust to a new environment. People always tell me that I’m a hard worker and that I have a good work ethic. That’s great, but that’s not the only thing I want to be known for.

Serene: I would have also told myself to get off the Hill. I feel like I did not explore too much beyond College Hill, since I was on meal plan. My favorite times during my freshman year were those random walks. Providence is so pretty. We keep on talking about the bike trail, which we plan to do once it gets warmer. (Post interview update: walked the East Bay Bike Path and highly recommend it!)

What is the best class you have taken at Brown?

Lydia: I can never make these kinds of decisions. I really liked Creative Non-fiction because it was great to see what other people were working on. African Development was also fun because it’s interesting to learn new things in a fun way. I never knew where that class was going and the conversations were always engaging.

Serene: I have two classes that come to my mind, which were great classes not necessarily because of the content. I did like the content of the classes, but I loved the professors. The first class is taught by Professor Nathaniel Berman. He is such a great professor. He’s funny and super enthusiastic in class. I really loved that grades genuinely were not a priority or concern for him. Instead he always gave super amazing and detailed feedback to help us develop our writing and ideas. The other one is a class that I am taking now: Spanish 500. Professor María San Venancio is the coolest person I have ever met. She doesn’t just teach the language; she makes you love the language – I know, I know, corny but so true. She shares funny and useful things like the best bars in Spain, the coolest street you should go to and the way people ‘hipsters’ text in Spanish. I am just so happy I finally decided to take a Spanish class before graduating.