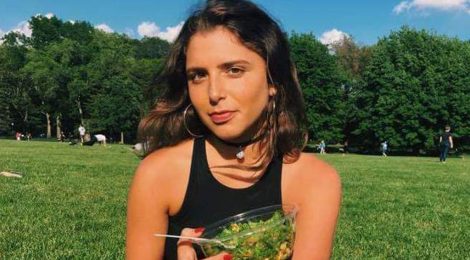 In this edition of International Humans of Brown, Nada Abdallah sat down with Fabiana Sarkis ’22 to share her experiences, her thoughts, and her wisdom. Read on to find out about this graduating senior as she discusses where home is for her, her favorite place in Providence, and more.

What made you decide to come to Brown?

Honestly I applied to a bunch of schools in the UK and mostly in Europe, and I never thought America. And then I started watching Gossip Girl obsessively and Serena talks about Brown. So then I started looking at schools in America. I really thought I wanted to be on the West Coast at first because of the weather is most similar to Dubai, and I wanted a similar environment. And like, I need the sun, I love the sun. I was choosing between Berkeley, Johns Hopkins and Brown in the end. And I don’t know, just googling reviews and stuff, Brown seemed like the most open minded, the most liberal, and also such an amazing school. My parents were against it because they did not know what Brown was… Just like, “what’s that? Go to Berkeley Go to Berkeley!” But I convinced them in the end and I’m so happy.

And, where is home for you? Dubai or Lebanon or somewhere else?

Like, at my heart, Lebanon. I have a lot of family. I feel way more connected to the roots and the people and the language. But where do I go more often and where do I know how to get around more often? Dubai, I grew up there for most of it.

Did you take any of these classes at Brown?

I took Spanish at Brown. I did upper level French courses at Brown, but I had already spoken, like I went to a French high school so…

Did you participate in any groups at Brown? Any communities or student groups?

It no longer exists.

Budgeting and stuff. I am in BRIGHT, which is the for refugees, which is really nice. I was also in the Neuroscience DUG. Yes, I tried.

You tried, hahaha. Do you feel like you have picked up any Americanisms?

Well, first of all, being at Brown, some of the stuff I used to say just wasn’t like PC. And I just didn’t know like how to think about the world and how to be politically correct and make sure you aren’t offending someone. I wasn’t aware of like subconscious biases, like I would use words that would have them and now I am way more careful about that. Other Americanisms like coffee and Starbucks (laughs). I come to Starbucks like, every – I come to Starbucks so much. I am vegan which is unheard of in the Arab world but it’s like way more American thing. Some words I’ve picked up, is that what you mean by Americanisms?

No words, I feel like I say the exact same thing. I think my accent has changed a lot. I sounded way more Arab when I first came, and now I sound a little bit more American. But yeah, that’s it.

Um… How was your senior thesis, before I forget to ask you about that?

It was a lot of work. But it was amazing, I’m so glad I did it. It was one of those things like that you feel you can’t do it. But when you work hard and prove to yourself that you can do it, it’s just like wow. It’s amazing.

Did it go well?

Yeah, it went really well. It got accepted, I got the email yesterday actually… So I’m graduating with honors which I’m really happy about. I’m so happy, my parents are so happy, they have been sh•tting on me all year, like “you never work, you never work,” and now they’re like, “fine you work.”

What’s your favorite place in Providence or in Brown?

I think if I’d have to say, it would be the steps of the blue room. It just reminds me so much, like how in between classes, we’d all meet up and have a good time and run to our classes late. There’s always someone there that I know, maybe just like sitting there. But in Providence as a whole, I love going to Bayberry. It’s like my favorite– it’s like a restaurant and a beer hall, and it’s like my favorite place ever. It’s also just very casual vibes, there’s always someone from Brown. The best vegan kale Caesar salad.

Do you have any advice you’d give to your freshman self?

I think, freshman year is stressful because you feel the pressure to make all these new friends, and find yourself and know what to study and be comfortable with Providence. But I think taking it easy and trusting that it’s a process and that it will happen over time is what I wish someone would have told me.

Last but not least, how do you feel about graduation?

(laughs) I’m very nervous but I’m very excited. I feel like I had the best support, this was the best four years of my life, as cliché as that sounds. And I would do it all over again if I could. That being said, I also feel like I am ready for the next chapter. I have explored Brown, I have explored Providence, I found who I am going to be in this place, and I’m ready to find who I am in the next place, New York.  I’m excited. I love New York.

Tags: ihob, senior
← name what is enough for you
Longing →