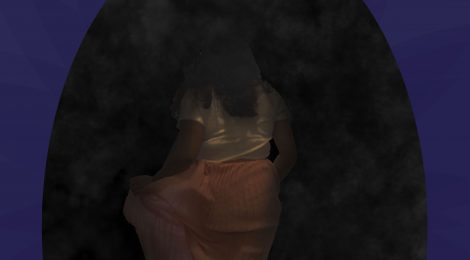 I come home, take off my shoes and wander into the kitchen, all while balancing my phone between my shoulder and my ear. I sigh when I look at the kitchen table — it’s still messy.  I told Julie to clean it this morning, but she never listens to me. I fidget with the napkins and the mail— mostly Raj’s mail, but God forbid if I ever tell him to pick it up—  scattered across the table as Anu whines in my ear, over the phone.

“She always has new clothes. Every time we see her, she’s wearing something different. Who’s giving her all that money? It can’t be her mother, not with her salary. I’m telling you, it must be her fiancé. He’s a little ugly, you know, but you can’t tell if you’re too busy looking at his Montblanc watch and designer suit. Sheeba doesn’t really care if he’s ugly. Why would she? I heard he buys her a new Tory Burch purse every month.”

Anu’s such a gossip. Sometimes I don’t know why I even bother talking to her.

“Anu, Sheeba’s fiancé would never buy her a Tory Burch bag. She’s hardly a catch, she’s not even fresh fish.”

The fear of being seen as rotting fish haunts all of us. It’s probably why we just stick to wherever we land first.

“Abigail, her marriage hardly lasted long enough to call her a divorcee.”

I reply, half of what I think, “Marriage is not a game that you can just decided to play one day and stop playing any time you want. Sheeba was married and now she’s not and the man she was married to is still alive and well, so she’s not a widow, then she must be a divorcee.”

“Okay.” Anu fattens the word out just like she fattens her chicken curry with potatoes. She claims it’s because her husband likes potatoes, but everyone knows it’s because she’s too cheap to buy more chicken.

“But,” she asks, “how do you explain all her new clothes?”

“I heard it’s because she gained so much weight that her parents just had to buy new clothes so Manoj wouldn’t leave her.”

Sheeba’s weight gain was getting to be as ridiculous as Anu’s gossip, honestly. No one’s asking her to be a skinny little stick, but at the rate she’s going she won’t be able to fit through the church door in June.

For a minute, I mourn all the sweets I’ve had to toss or give away because I was too afraid of gaining weight before my wedding and during the first few years of my marriage. In my mouth, just for a minute, I can taste all the halwas and jalebis and all the chocolates and caramels souring and rotting like they did in the trash.

Honestly? I move the phone from one hand to the other and stand up from the kitchen table. Julie did laundry yesterday, but she left the laundry basket right on the kitchen counter. I peer inside the basket and shake my head, she didn’t fold anything. I sift through her clothes— they’re wrinkled and now I’ll have to iron them.

Grabbing the laundry basket, I answer Anu as I head up the stairs to Julie’s room. “Manoj is Sheeba’s fiancé.”

The carpet on the stairs is such a hideous beige. It looks so dirty no matter how many times I try to clean it. I keep telling Raj to get it changed, but he doesn’t care.

I don’t really care, but I ask anyway, “Oh well, then what’s the new one’s name?”

“Well, whatever his name is, he’s going to leave her if she doesn’t lose the weight.”

Anu says with a laugh on the edge of her lips, “I don’t think so. He’s ugly, she’s fat. They’re a perfect match.”

I snicker as I walk into my bedroom and put the laundry basket down. Potato-eating, almost-cheating Anu can be hilarious sometimes.

Through my laughter I say, “They’ll have such ugly and fat kids that no one will marry.”

“If their marriage lasts long enough for them to have kids,” Anu cackles.

When she’s through wheezing— Anu has the ugliest laugh, I don’t understand how she’s still married— she changes the subject.

“Did you hear,” Anu whispers delightedly “Mekha might be pregnant, you know, Neetu’s daughter?”

I did hear. Three days ago. Mekha’s younger sister told my niece.

I’m suddenly very tired of Anu. Still I pretend to be shocked, “No? Really? What?”

I dig through Julie’s clothes again. I hold out a pink shirt with little white flowers on it by the sleeves and examine it. It’s too wrinkled and if I fold it, it’ll get even more wrinkled and Julie just won’t wear it. She’d rather pick a different shirt to wear than actually turn on an iron. And Raj is even worse— if I don’t iron his shirts he’ll just wear them all wrinkled. I’ll never forget the time he showed up to church in that wrinkled red dress shirt. Anu never let me hear the end of it— she called me a lazy wife in front of everyone.

“Mekha’s just so lazy.” Anu says, “She always comes to church with her hair unbrushed— oh my God, I saw her at the mall once and it looked like she hadn’t even washed her face that morning.”

I ask, “What does that have to do with her being pregnant?”

“I just wonder how she managed to find a boyfriend in the first place, when she can’t even find a comb?”

“Can you imagine what Mekha’s baby will look like,” I say as I take the laundry basket into Julie’s room to iron them, “do you think its hair will be as unruly?”

Why do we keep the iron in Julie’s room? It’s not like she ever uses it. Then I remember, it’s because my room is already too cluttered. And Julie’s room is the biggest.

When we first moved in and Julie was eight, she adamantly declared the biggest room— the master bedroom— would be hers because she needed the extra space for her stuffed animals. Neither Raj nor I had the energy to fight her for it; we were too busy fighting each other back then.

“They say twins are good luck,” Anu laughs, “How can it be good luck for Mekha to have two ugly babies to raise, all alone?”

I put the laundry basket down and sit on Julie’s haphazardly made bed. Her deep blue comforter is folded in threes and hanging off the edge of the bed. The black bed sheets beneath are coming off on one side of the bed and more shoved rather than tucked in on the other side. When Julie was twelve, I tried to teach her how to make neat corners, but she always told me she was going to live alone as a spinster so she’d never have to worry about anyone seeing her messy corners. I didn’t have the heart to argue with her plan, it made too much sense to me.

Stupidly, for a minute, I think, maybe it was the smaller room. Maybe if I had fought Julie. Maybe she would have taken the smaller bedroom because she used to listen to me back then. Maybe Raj wouldn’t have suggested moving into separate bedrooms because he felt like he was “suffocating” in the smaller room.

“And we don’t even know why Sheeba left her first husband, you know? I think he cheated. Or maybe she cheated,” Anu says, her voice getting higher pitched with each cheated.

Cheating is always the most interesting and fun way to ruin a marriage. People always want things to be interesting.

Anu blabbers hurriedly, “Why do you think Sheeba left Anil?”

But to Anu I say, “Eh, he probably left her because she’s fat.”

Anu’s disappointed in my theory and sighs, “What a boring story, couldn’t you think of something more interesting?”

People always want things to be interesting. And leaving your husband because you’re sick and tired of him isn’t interesting; it’s just sad.

I continue, half-heartedly, “Well, if someone had cheated on someone we would know.”

People can’t really hide interesting things from each other. Everything’s just so sad and so boring, that anything that even remotely glimmers of life is snacthed up and examined and treasured, even if its surrounded by the glow of sorrow.

I am lying down now, in the center of Julie’s messy bed.

In another world, the deep blue comforter and black sheets would be a soft pink, wrinkleless affair. I hate wrinkles. Each corner of the sheets would fit perfectly into each corner of the mattress and I would lie in this bed every night, fitting perfectly into my husband’s arms. And Julie’s room would be in my bedroom next door. She’d be a good daughter, her bed would be made every day and she’d pick a nice bright and happy color for her sheets, maybe orange. I like orange. And the room Raj sleeps now, well, maybe, we’d have another child, a boy, in this perfect world. He’d have light blue sheets. I think his name would be Jack. Julie and Jack.

Julie would teach Jack how to make neat corners and they’d keep the house immaculate. Julie hates vacuuming, but Jack would love it. And Julie likes washing dishes and Jack would hate it, so Julie would wash the dishes all the time so she could make sure Jack would never have to do it. And Julie would do the laundry and Jack would fold it and put it away before anything could wrinkle. And Julie and Jack would grow up so protective of each other that they would stay close their whole lives. I’d find a lovely boy for Julie to marry and Jack would be very wary of him, until he proves to Jack that he’s kind and caring and loving. And then Julie would be married and at her wedding I’d gift her soft pink sheets.

And as I moved into another world, Anu moved on to another theory.

“Maybe,” she said slowly, “Maybe, they both cheated on each other.”