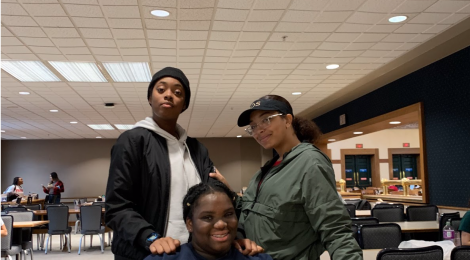 Here it feels like you’re more rushed. It’s fast-paced. Everyone is always doing something. There it’s definitely calmer. That’s probably the only thing I miss.

Q: In what way would you consider yourself international?

A: My parents were born in Liberia and they’ve taken me there so many times that I barely even know my own state.

Q: How is America different from where you are from in Liberia?

A: Oh don’t even get me started. The climate is super hot and the houses — they’re not usually those tiki huts you see that people usually portray it as. They have nice houses — similar to the houses in Barcelona. It is pretty nice over there, but the economy is not the best.

Q: Is there anything you miss from Liberia?

A: Definitely the cooking. There’s this one rice called jollof rice and it’s usually this kind of orange color. The describe is indescribable, but it’s amazing.

A: Liberia is more about Christianity. The way we celebrate it is … more rowdy. Also our clothing. We’re usually wearing Dashikis — very colorful clothing. Usually the men wear these long lined T-shirts with a bunch of colors, almost similar to tie dye. The women wear the same thing, but it’s more like long dresses and then a head piece to go with it. The head piece would be at least, maybe, a foot long.

A: Definitely kids not understanding it. I always get the question “can you speak African?” (laughs). That question is so irritating to me (more laughs). Like we have different dialects and all that — for them to say can you speak African… And then you have the people who call most Africans African booty scratchers … it’s weird. It went from hurtful to just annoying, but you kind of get used to it after a while.

Q: How long have you worked at Brown?

Q: How is America different from where you are from in the Ivory Coast?

A: There are many beaches there because it’s basically an island. Where I lived was mainly just on the coast so didn’t see as many people as you do around here. And the houses are a lot smaller than the ones here. They’d look like mansions over there. I lived in a city.

Q: Is there anything you miss from Ivory Coast?

Q: How long ago did you come to the U.S?

Q: Is there anything you would like to add that has not been asked?

A: We’re not all the same. I notice how people stereotype Africans into one thing as if we all speak one language, but we’re not the same. Especially the side of African I’m from — I’m from West Africa, and we are completely different than East Africa. We all also look different.

Q: How long have you worked at Brown?

Q: How is America different from where you are from in Portugal?

A: Where I’m from it’s definitely more city-like. More countryside. Here it’s busier, there are more shops and more things to do than where I’m from. It’s more relaxed where I’m from. I lived in the country on a hill and then I came here and it’s nothing but houses.

Q: When did you move?

Q: Is there anything you miss from Portugal?

A: My family mostly, but also how it’s laid back. Here it feels like you’re more rushed. It’s fast-paced. Everyone is always doing something. There it’s definitely calmer. That’s probably the only thing I miss.

A: Definitely the language — learning the language. I had a hard time when I was younger, but I’m good now. That was probably the hardest thing for me. Also, I was raised by my mom’s side of the family, and then I was introduced to my dad’s side. My mom’s side is from Portugal and my dad’s side is here. So that was a challenge.

← San Francisco: Reimagining the Relation Between Residents and the Built Environment
How to love my dad: →