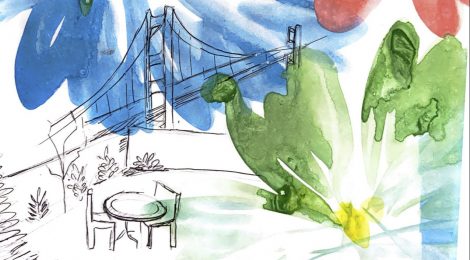 San Francisco: Reimagining the Relation Between Residents and the Built Environment

IWB / October 27, 2019 / Comments Off on San Francisco: Reimagining the Relation Between Residents and the Built Environment / Non-Fiction

This past summer, I got the chance to explore San Francisco for two months. When I heard that I got an internship offer from an organization located in the West Coast, my first instinct was to go and explore this new city that I have never been to. The two months in San Francisco exposed me to new ways in which residents in the city live their off-work lives, and made me reimagine the ways human beings can interact with the built environment.

If you ask me to use one word to describe my first impression of San Francisco, it would be “bright.” The moment that I got off the airplane, I felt that my body was being surrounded by mind-soothing warmth that I hadn’t felt very often in the bleakish New England weather. Unlike in Boston International Airport, the walk from the arrival terminal to the Taxi station was on the sunny, ground floor, which allowed tired travellers like me to take a pleasant walk after their long, dragging flights.

On my first day of the internship, my colleague took me to one of the rooftops in the area. The rooftop was like a secret garden located on top of a gallery in Union Square. Some professionals sat on the benches in the shade, chatting and eating their lunch. Rays of sunlight passed through the leaves and shined on their nicely trimmed blazers. Once in a while, breezes coming from afar gently caressed my shoulder, relieving my stress from sitting in front of the desktop all that morning. I could not stop appreciating having such a cozy, relaxing spot in this busy workplace neighborhood, a place that creates a safe harbour for professionals to unwind from the stresses in the day and simply have a friendly conversation with each other. In the following weeks, I explored many more rooftops located close to my company. One time, I even found a small park located just around the corner of a busy street, offering a peaceful place for people to chat, walk their dogs and elderlies to do exercises. This kind of working environment is vastly different from the ones I saw in the cities that I grew up, where professionals sat in their office for the entire day without going out of the office building.

Designing the space we want to live in involves considering the relationship among the built environment, nature, and us. How we design it will ultimately impact the mentality of the residents living in the city.

The rooftops and off-the-street parks were not the only gems that I found in the city. In the time that I spent in San Francisco, I also got to explore the Golden Gate Park and the Presidio, two large spaces reserved for plantations and residential recreations. It is magical to find such a vast space of trees, flowers and grass in the middle of the city: for one moment, you are driving on the busy streets, the next, you find yourself driving through tall pines, oaks, and redwoods native to the land. The parks are so large that they could sustain an independent ecosystem that is home to many animals-even buffalos! These parks are not simply patches of green-they are spaces that allow nature to thrive, interact, and coexist with the bustling city life made of concrete buildings.

Starting from the pleasant walk in San Francisco airport, to the cozy rooftop garden in my workplace, and finally to large parks like the Presidio, San Francisco never stopped to make me re-contemplate the relationship between myself and the built environment. Growing up in Beijing and later travelling to cities like New York and Boston, I always feel a distinct demarcation between the built environment and nature, the inside and the outside. People’s lives are like a fast rolling conveyor belt that is trapped within the giant, operating machine called “the city.” It is evident from the complexions of some pedestrians walking on streets that they are stressed, perhaps unhappy about sitting in the office building for the entire day. As designers and creators of the space we live in, we have the choice to trap ourselves in bricks and concrete that is isolated from nature, or to create a space that is more open, welcoming, and embracing of nature. With rising population and the need for shelter, it becomes increasingly rare to find completely pristine natural land that is not yet developed for human usage. However, we could choose to make a deliberate decision that embraces the presence of nature within the city and connects the inside to the outside. While giving nature a place to thrive in the city, we also vividly shape our living experiences in the built environment. In the case of San Francisco, because of the presence of rooftops and large open spaces like the Golden Gate Park, people have the chance to relieve their stress and reconnect with nature.

Designing the space we want to live in involves considering the relationship among the built environment, nature, and us. How we design it will ultimately impact the mentality of the residents living in the city. Among many blueprints and alternatives, San Francisco offers an interesting example that allows me to envision a new way residents can interact with the man-made city.