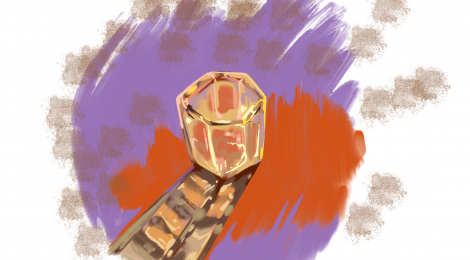 “Call him to get more chai, would you?” Tanya Oberoi reached her hand out to Anuradha Aggarwal and gestured to the waiter.

“You ask no, your Marathi is better than mine,” Anuradha replied. She flickered her Chinese fan, embroidered with the Guanyin, and started waving it frantically over her neck.

“Uff, after all this time? You make me do everything. Bobby really spoiled you, didn’t he?” Tanya turned to face the back of the lounge and raised her hand, “Areyy, idhar aao! Quickly.” A lanky young man with a newly grown moustache ran to Tanya’s side.

“Masala chai. Six spoons of sugar, no tea leaves—haan—drain it out if you must. Leave it out on your veranda for six and a half minutes—I don’t want it too hot—but then, get me half a cup of hot milk. Steaming hot—haan, burn the tongue hot. Make sure you stick your pinky in and check, okay?”

“Oh, and could I get a scotch on the rocks,” Anuradha added, “One cube please—nothing cold, my throat is giving me trouble.”

“What? I can indulge myself every now and then, can’t I?”

“Anu, your every now and then is every two hours.”

The lounge was dimly lit and overlooked the hazy Bombay twilight. Tanya preferred places like this, it calmed her senses. She couldn’t stand those new evening lounges that had recently popped up on the perimeter of the port. They were plastic and had fluorescent lighting. Who in their right mind would put fluorescent lighting in an evening lounge! It made sense once she saw the people who went. Mothers with IKEA prams and Chanel parasols, uncombed perms and the ugly jewelry that hung like urchins from their necks. They were all so tacky, the Bombay-new-money types. Tanya had remembered South Bombay to be different when she was younger. It had class. So much has changed since then. Well, really, what had changed was her and Gautam’s move to Singapore. It was an odd place, Singapore, straddled a line where priorities were both grave and inconsequential. The location of their bungalow on Malabar Hill didn’t matter in Singapore, neither did the number of servants they had. No one cared about how many Husains or Souzas Tanya had hung on her wall, when Peranakan artists who commissioned for the Sultan of Johor were in vogue. She looked at Anuradha who had placed a cigarette precariously out the corner of her mouth. Tanya wondered if she would have ever been friends with Anuradha if they hadn’t met in Singapore all those years ago. Her friends from Bombay certainly weren’t fans.

Anuradha would talk openly about her sex life and her trips to the gynecologist, which was hardly necessary, but kept Tanya amused. She would come hungover to pujas and try dancing with the poor temple pundits at weddings. Her daughters, Ananya and Aisha, got away with anything. On the surface, there was nothing classy about Anuradha Aggarwal. But Tanya had to keep reminding everyone that Anuradha was, in fact, married to Bobby Aggarwal. And that always meant something.

“Eh, Anu, get that smoke out of my face yaar.” Tanya said.

Tanya raised her eyebrows and looked down at the marble floor at a graveyard of cigarettes. Tanya had smoked once, yes, but those days were lost, somewhere in the veranda of her mind. It was social smoking—mainly—at sangeets or at birthday parties. She had known her limits. The young waiter returned and served the two women with their tea and whiskey. He stroked the few hairs of his meek mustache as he watched Tanya reach for her cup of tea. She tilted the cup, ever so slightly, until she could feel the waves of heat caress her face. Moving it closer to her nose, she wafted her hands delicately over the cup’s contents.

“Oh god, Tanya, you’re so dramatic. This poor boy is waiting,” Anuradha said. Tanya turned to face her friend, who sat there scowling. All that was left of Anuradha’s drink was a nice, clean rim of brandy that clung to the bottom of her glass. Anuradha pursed her lips and patted them with her napkin.

Tanya dipped the tip of her pinky into the small cup of hot milk she had asked for.

“It’s good,” she said quietly. The waiter shuddered as she looked at him in approval, as if he could feel the weight of her wealth.

“Thank you, ji. Thank you, thank you. You need anything—”

Tanya lay back in her seat and sighed as she looked over the lounge veranda.

“What? What is it Tanya?” Anuradha asked, inching her chair forward with the heels of her feet.

“Nothing, nothing, Anu. Just drink your scotch.”

“There must be something. You wouldn’t look at me like that if there wasn’t.” It was times like these where Tanya remembered that Anuradha was never a tough girl. For all her bravura, she was still the shopkeeper’s daughter from Bihar who fell in love with an Aggarwal. But nobody knew that, apart from Tanya, Gautam and Bobby. Not even Bobby’s parents had known. Imagine what would have happened if something as scandalous as that was to get out. The whole Aggarwal Empire would simply crumple. Tanya couldn’t believe it herself. Anuradha was her first friend that didn’t hail from an old money family. Or a family with any money at all. She reminded herself of that when she was feeling insecure, that she was a charitable woman. Anuradha had always needed Tanya. And for the first time ever, Tanya needed Anuradha. Anuradha was aging now, and she had been for a while. They all knew it was the alcohol. Her hair was now wispy and hung over her brow like cluttered cobwebs. No amount of henna or oil was going to change that. In Singapore, she had always been complimented on her skin, so fair, so supple. It was still fair, but like a teabag, saggy and translucent, where you could almost see the veins of her cheeks. She was beautiful, and nothing would ever change that. But she had let herself go.

“What do you think it is?” Tanya said as her eyes gestured to the empty glass on the table. Anuradha looked like she was going to say something, but just looked down at her palms. Tanya had never been the comforting type, but Tanya could see that Anuradha needed her to say something.

“The circles under your eyes are getting deeper and darker, Anu. At this point, you could give Veena Gupta a run for her money.”

Anuradha giggled. It had been a while since she had heard Veena Gupta’s name, after the incident and all.

“Eh, you’re really bad Tanya,” Anuradha said as she smacked her fan on Tanya’s shoulder, “Don’t compare me to someone like her.”

“I never said you were like her, I said that your dark circles were.”

The waiter arrived and replaced Anuradha’s empty cup with a full one. Anuradha wrapped her fingers around the cold glass, tapping her fingers on it rhythmically. She did not look at Tanya. With her hands shaking, she brought the glass to her lips and began to gulp. Tanya clenched her jaw. You are the company you keep, Tanya reminded herself. The Chaat Party had made that clear enough. Soon enough, Tanya would be known as the alcoholic-sympathizer. The hopeless caretaker of the poor and troubled Anuradha Aggarwal. Or maybe she’d be hated for it, in the case that Anuradha was found in a ditch somewhere, choking on her own vomit. Because no one would blame Bobby, even though everyone knew about the affairs. They’d blame Tanya, Anuradha’s sole, life-long friend from Singapore. And then what? History had a funny way of repeating itself within the Chaat Party. It had been a while, but it hadn’t been that long since the incident had happened with Veena Gupta and Pushpa Bhatia.  But Tanya had no choice.

Tanya and Gautam’s only son, Pranav, was thirty-two and unmarried. It had been a good twelve years since Tanya had found a pair of men-in-less-than-compromising-positions in her son’s browser history, but she had hoped that it would’ve just been a phase. She should have never gone on his computer. She would have avoided the knowledge, at least. That’s what killed her the most. Tanya never told her son of her stealthy investigations, and he had ever come to find out, she would’ve just said she was making sure he was staying studious. Which was true, in part. Everyone has had the urge to experiment and some point, Tanya had convinced herself. Anuradha’s youngest daughter, Aisha, a plain but docile girl, was unmarried as well. Except, Anuradha couldn’t care less about the shame, or the dishonor of having an unmarried daughter from the Aggarwal clan. Aisha was certainly not beautiful: she was short, slightly plump and had an eyelid that always seemed half-shut. It must’ve been hard being compared to her older sister all the time, Ananya, who looked like she had stepped off of the set of a Karan Johar film. But then again, she was the one who got married off with that white man. What should that matter to Tanya now? What mattered was that Aisha was single, and she was an Aggarwal.

“Hello? Tanya?” Anuradha said, her voice trembling. Tanya noticed the specks of acrylic polish from her nails as the tapped nervously.

“Sorry, sorry, I was just thinking about something.”

Anuradha nodded meekly as the tip of her nose started to turn red. Her eyes began to get wet. Tanya acted as if she didn’t see anything and continued sipping her chai. Anuradha was on the verge of a breakdown. Tanya had grown used to this, because the truth was, Anuradha was in some deep shit. But then again, weren’t they all? They all had a lot of everything, but also a lot of nothing. “The paradox of wealth”, Tanya’s mother used to say. Tanya and Gautam hadn’t said “I love you” for a few years now. Well, there was that one time at Kalpana’s 60th. And that was only because the High Commissioner of Luxembourg was there.

“You think I’m crazy. You think I’m going to end up like her, like Pushpa. Scorned and a drunk, shacked up in reha—” Anuradha stopped herself before she could say anything more. Her bottom lip quivered. Tanya kept her eyes on the Bombay sunset—its golds and magentas wrestled with each other on the dusky sky. Below the nighttime bustle was about to start. Fumes from the rickshaws would sliver up to their lounge veranda and the two friends would be reminded of their routines. Outside it was getting chilly, and the tea was getting cold. Tanya stirred her cup with her pinky and downed it.

“I have no idea what you’re talking about, Anu.”