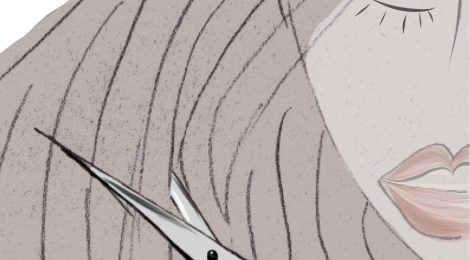 A week before college, I decided to cut off all of my hair. My mom begged me not to do it. I tried to tell her it was “just hair,” but deep down, I knew that I was lying. My hair has never been “just hair.”

My hair is the remnants of a stolen heritage. My hair is “high fashion” and “hip,” yet also “ghetto” and “trashy.” In high school, my hair was something that made me different from everyone else. No one had to worry about their hair frizzing up in the rain. No one had to schedule their plans around wash-day or a hair appointment. And as an impressionable teenager who was dipping her feet in a pond where most of the time I was a brown spot in a sea of whiteness–I hated being different. I didn’t see my hair as a fountain of rich cultural history, but something that was holding me back from being normal. And instead of embracing that difference, I hot-pressed my hair into submission. I burned out every inch of culture and every inch of my ancestors with the press of a flat iron. All because I wanted to fit in. The worst part of it all? I was showered with compliments.

“I love your hair like this!”
“I didn’t know your hair was that long!”
“Your hair is so pretty!”

They didn’t know that every word was fueling a toxic relationship between me and my hair. I desperately wanted to fit, and if my hair had to pay the price, then so be it.

On a random Sunday night, while I was washing my hair, I noticed something different. Usually, with a touch of water, my curls would slowly be restored. Of course, they would still meet the fate of the flat-iron, but on this particular day, my curls didn’t show up. I washed and washed, yet I saw nothing. I knew what this meant; my hair was dead. She was murdered by the heat of repeated flat ironing that I willingly executed. The extensive amount of heat that I used caused the chemical bonds in my hair to break, resulting in irreversible damage.

My hair was lifeless, flat, and dead. But isn’t this what I wanted? Straight hair like the girls at school? Hair that was manageable? Hair that was normal? It was at that moment I realized that I had been wrong this entire time. I never actually wanted my hair to be any of those things, and
I was tired of keeping up a facade. My hair was dead, but she has a chance to be reborn. And, at the same time, I, too, had to kill my old mindset and adopt a new one. The only way to repair the damage was to let it go.

My mother was not having it.

I couldn’t blame my mom for having these thoughts. She was only speaking out loud the worries that were floating around in my head. But I knew I had to do it. I knew I would never truly be liberated from this idea of beauty if I didn’t challenge it directly. I gathered all my courage, texted my hair stylist, and scheduled an appointment the week after.

When I walked into the salon, my hair stylist looked at me and asked, “Are you okay? This is a big decision and I wanted to make sure you were mentally okay.” And I was more than okay. In fact, I had never felt better. I felt like I had just taken the remote control of my life out of someone else’s hand and pressed play. I was finally making a decision for myself. Not because I think everyone else will like it, but because I would like and I wanted it. With every snip, I felt a weight lifted off my shoulders. With every buzz, I could feel a sense of relief. The clippers were cutting the invisible chains that imprisoned my mind.

The first look of my new haircut filled me with this feeling of euphoria. I looked down at the pieces of hair that were once attached to me. All I could see was the pain of trying to fit in. The pain of being someone you’re not. The struggle of pleasing others. When I looked into the mirror, I saw someone completely different. I saw a woman who was putting herself first. A rebel resisting against an idea she held herself prisoner to. My hair was finally free.

I was finally free.

← IHOB – ANGELA AKOTO
For the love of Injera →