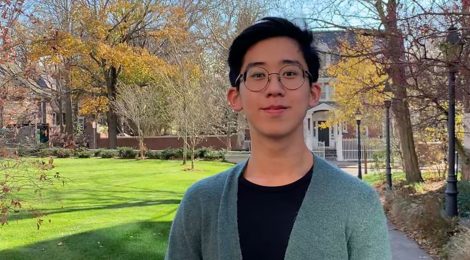 When I’m involved in a whole bunch of things and my days are packed back-to-back with work, that’s when time seems to go by the slowest, and it feels like every moment is hyper-real.

International Humans of Brown (IHOB) introduces Zack, a first-year from Singapore. He will most likely concentrate in Computer Engineering and Visual Arts.

Q: Where are you from?

A: I’m from Singapore! It’s hot, it’s crowded (four times smaller than RI, but six times the people), but I like it there, I guess.

Q: What is your favorite time of day at Brown?

A: Evening. First, because the campus becomes really pretty! Second, evening means the day is over. Though, lately, there hasn’t been much in the way of evenings, it’s just dark by the time I’m out of class…

Q: Have you talked to your international friends about your experience moving to the States and what that’s been like for you?

A: During international orientation, a bunch of us were talking about what things were surprising, especially language-wise, like saying “you’re good” a whole lot. Also, we frequently speak Singlish in Singapore; it’s fast, with shorter sentences, and a different grammar from typical English. Sometimes, it seems like entire syllables are skipped over, so I like to think it’s an efficient language! That being said, most of us are capable of speaking perfect English, but whether we actually do that here depends on the person—some don’t change how they speak and they’re very proud of that. It’s a joke among Singaporeans who go overseas and return that once you do, you won’t be able to switch back to Singlish. But for now, just avoiding phrases I used a lot back home, like “jiayou” and “paiseh”, is hard enough that it slips into conversation sometimes!

Q: Now that we’re approaching the end of our first semester at Brown, what else do you want to explore?

A: I want to get more involved with the art scene, and I’m also hoping to explore the different studio classes in RISD, and CSCI/ENGN courses in Brown. Maybe even undergraduate research projects if they’ll take me (they probably won’t!).

A: In general, doing and trying lots more stuff. When I’m involved in a whole bunch of things and my days are packed back-to-back with work, that’s when time seems to go by the slowest, and it feels like every moment is hyper-real. I’d also like to continue teaching with STEMS or become a TA — it’s nice because I can make a difference, even if it’s just a very small one, and for very few people.

Q: Do you have a personal motto?

A: “May your past be the sound of your feet upon the ground.” It’s a line from a song by Fun, and I first heard it while pulling overnighters working on my final project with my art class, which was a grand time!

Q: Why did you decide to come to the U.S. for college?

A: My art teacher (a RISD alum) a few years back insisted that I should apply to Brown/RISD. It’s awfully expensive, but I was fortunate enough to get a bonded (engineering) scholarship from my government. And because there aren’t many public-sector leaders who have any sort of art background, I decided I wanted to come back with an art degree to change that. What better place to do both art and engineering than in the US? I love that the STEAM (STEM + Art/Design) movement is gaining ground here, because I feel we’ve got a lot to learn from it. Singapore, and Singaporeans, are all about practicality, efficiency, and pragmatism. As far as majors go, that’s engineers, lawyers, economists, and nowadays computer scientists, too. Art/design brings a flavor of creativity and disruptive innovation, and with that experience, if i can match up to those from such backgrounds, I can bring some of STEM-to-STEAM spirit back. Even if it inspires just one more kid who loves both art and science not to give up on either, I think it’ll be worth it.

Q: Is there anything else you want to add about life at Brown or in the US so far?

A: There’s something I thought was pretty funny. My friend said was that while he was eating tofu, someone said to him: “um… don’t you think tofu is a little problematic right now?” The reasoning being that since tofu is made of soy, and the Amazon is being cut down in part for soy farming, eating tofu means you support the Amazon being cut down. Call it activism, or just being overzealous in calling others out, but I’ll admit I’ve never had to think about anything like that before coming to the US.

← For the love of Injera
Wireless Family Weekend →