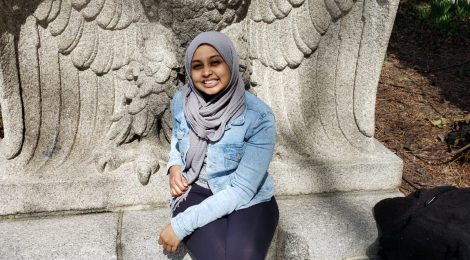 For me, I used to think of home as more of a physical space than anything else—it had to be a setting or an actual scenario in order for me to associate it with ‘home.’ But as I grow and continue growing I realize more and more that home is more about who I am with as opposed to where I am.

International Humans of Brown (IHOB) introduces Faiza, a junior who sees Dhaka, Bangladesh as home. In her time at Brown, she has been involved with Brown Barsaat, Brown Bengali Students Club, and Brown Muslim Students Association.

Q: Where is home to you, and what do you consider ‘home’ to be?

A: For me, home has always been Dhaka city. Home is traffic; noise; the polluted air; the people on the street that look like you, talk like you, walk like you. Home is my mom’s cooking, drinking tea on a rainy day, and being with my family. Yeah—home is Dhaka for sure.

Q: How do you think Brown fits into this mold of ‘home’ that you have in mind?

A: For me, home has always been about family—where family is, home is. And I think being here for two years now has definitely allowed me to cultivate my own vision of family here at Brown. I have gotten to know many people who I care very deeply about, and in those people I most definitely see home.

Q: That’s really sweet! Do you think the concept of home has shifted for you in any way over the past couple of years?

A: For me, I used to think of home as more of a physical space than anything else—it had to be a setting or an actual scenario in order for me to associate it with ‘home’. But as I grow and continue growing I realize more and more that home is more about who I am with as opposed to where I am—you know what I mean? And I can be home as long as I am comfortable with the people around me and the environment. But yes! My definition of home has changed over the years but it remains to be centered around people more than anything else in particular.

Q: Do you speak any other languages other than English?

Q: How did you come to learn those languages?

A: Bengali was the language that my mother taught me to speak in—that was the language that I wrote my first poems in, read my first stories in. I even remember reading Snow White in Bangla! My mother would buy me all these dubbed movies in Bangla on those old cassette players and it was beautiful. And for me language has always been something very important to me and my home because a lot of my family back home doesn’t speak English or just has never had the opportunity to learn, so language and Bangla has always been this way for me of holding on to home and family in a sense.

Hindi was different. Every Bengali person knows some Hindi. I learned it off of TV while growing up because my mom used to watch all those old stupid soap operas, which I guess helped me pick up some Hindi.

Q: That’s a lot of tongues to be fluent in. Have you ever had trouble with traversing between the three languages, as in going back and forth between them?

A: Of course. I feel like it is very difficult to navigate all three sometimes because I am most articular in Bangla, which means that most of what I want to say to my non-Bangladeshi friends is often somehow lost in translation. It is sort of frustrating at times just because of how I communicate with most of my friends here at Brown through English, which I personally think of as too simple a language to describe all the thoughts that I have. It sometimes feels like English is not enough and simply insufficient for what I am trying to say, I guess.

Q: How has this year been like so far for you? What is something you think went really well this semester?

A: One thing I really appreciate about this semester is how I spent more time with people that I love and less with people that do not make feel as happy about myself—I really think that that was a good thing just because of how hard it is sometimes to cut and communicate less with toxic people that are harmful to you. Especially in the context of Brown and university, where you see people all the time—it really makes it hard to do so.

Q: And as a follow-up, what do you think is one think you are taking away from this semester?

A: Academic-wise, I definitely believe that I spread myself too thin this semester. I did a lot when I knew that I simply did not have the capacity. I think that that was pretty difficult to navigate considering the fact that I haven’t been home for a year and how I have been pushing the limits of my mental health for a long time now. It makes it very difficult for me to be able to keep my promises not only to my friends but also to myself. It was incredibly difficult to realize and acknowledge that, and so from next semester onwards I want to focus more on doing things that actually peak my interest and benefit me in ways beyond the sphere of academia—whether that be spiritually or emotionally.

Q: Did you participate in any groups at Brown? Any communities or student organizations?

A: I participated in a few groups but I was very invested in all of them. I think my favorite one would definitely be acapella with Brown Barsaat. Music has always been an outlet for me to relieve stress, and I really enjoy singing with friends in such stress-free environments. Other than that I am also the president of Brown Bengali Students Club, which has allowed me to get to know and to actually organize and fundraise for people back home. And I definitely think that this has been one of my most rewarding experiences so far. It also just feels very.. warm. Being with other people that share similar experiences with me with regards to ethnicity.

Q: What’s one fundraiser you can think of that you guys did?

A: Last year we were able to fundraise over $1800 for the Rohingya refugee crisis.

And last but not least would definitely be the Brown Muslim Students Association. I consider the people over there to be my closest friends ever. Within that space I truly see relationships that I will hold on to after I graduate by many, many years.

Q: You are a junior now—that’s a pretty long time here at Brown. Do you think that you have picked up on ‘Americanisms’ during your time here?

A: Definitely. Just yesterday, one of my close friends told me that I sound American—which really sucks! Because I am not really sure if I want to be perceived in that way. But I also feel like I picked up some good things about American culture. Being here gave me more room to be myself, which unfortunately is not always a given back home. It provided me with a setting where it is safe to be who I am—which I am still trying to figure out, but being here is a much safer and less toxic environment for self-exploration.

Q: Do you still encounter culture shock now or have you overcome that?

A: For me, culture shock was anticipated but it didn’t hit me as hard as I expected. But I think the little things have compounded over the years – especially the tiny differences in how people interact back home versus here. In America you have to weigh your words more carefully before you let them, which I think is good as opposed to saying whatever comes to mind back home. You have to be more cognizant of what you speak. But that does form somewhat of a gap when it comes to how close you can get to people here. I think it somehow hinders relationship building with people. But other than that, I would not really say I experienced too much culture shock.

Q: Have you encountered any experiences at Brown where you were stereotyped?

A: Yes—as a person who appears visibly Muslim, people often perceive me as a person that leans more towards the conservative side. I think in the past that has sort of deterred some people from talking about certain things with me just because of assumptions, I guess. It definitely stems from misconceptions about what the hijab and Islam are, which eventually lead to misconstrued thoughts about not only myself but other hijabis on campus as well. But as people on campus got to know me better and better I think they got a clearer vision of what values I hold dear to me.

Q: Last question! What’s your favorite place in Providence or in Brown?

Tea in Sahara! The owner treats me like his daughter in an overprotective and a very humorous sense. I also really like the atmosphere over there. You can find me studying, sipping chai with friends, or doing anything in between, really.