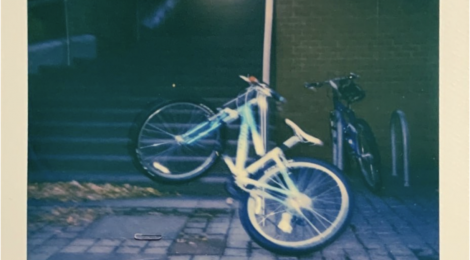 He was not the same person that I had seen cuddle down into the armchair. I crept from the blanket that had been haphazardly placed on me. I thought it was him. It wasn’t him. In my mind, or maybe under my breath, I hoped that God would rest easy on his soul. I called my friend, knowing enough to understand. My breath populated the early air. I slinked through my room, placing my camera in my hand, resting it against my side.

Two men walked past me and two bicycles rested toppled. I took polaroids of both moments before they slipped into grasplessness.

A couple left their dog leashed to a railing outside a Starbucks. I went to take its portrait, but a woman aware of herself approached and asked if the dog was mine. It isn’t, but would you mind if I took your picture? She said she needed to get herself a stool and wondered aloud if they’d give her one inside. They did and she shut her eyes and affixed her fingers to an uncaring sky almost as if to mock the sky for its arbitrariness.

I walked down the street and I asked a man if he’d be fine if I took his picture. He told me he didn’t want me to waste my film. I wished I could have had the wherewithal to explain why it was impossible for it to be a waste. I would have had a better answer. Why are you taking pictures? I couldn’t come up with anything to say for that. I didn’t think anyone would really bother to ask. Just for its sake, I tried to say without muttering. He was pleased at me holding a physical camera autonomous from anything else. He remembered a friend making a camera out of cardboard. I’m waiting for the bank to open, but you have a nice day now.

I let the pavement take my feet, resting my eyes on a police officer. I asked him for a photograph. At first he thought I meant of the construction he presided over. I told him I wanted him. He said he wasn’t made for photos, but I assured him I didn’t mind. Let’s wait for my buddy, he’ll be here in five, we’ll both be in it. We talked about where we’re from. About Los Angeles, where I wasn’t really from, but I guess he thought I’d have enough to say about it. In a sense I feel I was deceiving him, not giving him what he had asked for, but what I knew he didn’t want. When I told him Los Angeles was its own universe, he knew I was a student. At least half an hour must have passed, but I could have waited for eternity. Part of me hoped that maybe he just wouldn’t show up: I’d be content, prepared, waiting for nothing. Then he came, but they both had to leave. I forgot they had a job to do. Hey, are you a student? Yeah, I said. If what you want doesn’t end up working out, there’s always construction. No one wants to do it, but it’s good pay and there’s always a demand for it, especially now. He cradled pizza on his lap. I asked for his picture to thank him, but I didn’t say that part out loud. He got out of the construction site’s pickup and stood as if nothing could happen. I nodded myself to go.

Stumbling through gracefully, an excerpt someone had left greeted me.

Lee was suffering from barotrauma but he’d prefer if no one fussed over it.

The rest of it got a B+. I ran into a well-dressed, well-groomed man, and he was keen to have his photo taken and that was it.

I saw another police officer and I went through my routine. He laughed at mine and went through his. He directed me to two construction workers who’d be welcome. What are you taking it for? I’m not sure, just nowhere crazy, I said. Well if it’s nothing crazy, I don’t wanna be in it. We shared some stinted laughter over it. They got close to each other, ready for a moment that would disappear into ether.

I had one exposure left now. I made eye contact with another officer. I knew I couldn’t just walk past him. He was eager to be photographed, even directing me to where I should stand. Are you an art student? No, I said. Isn’t it crazy how that photograph could be worth something ridiculous. Like, if I, Mike, took a photo and you…what’s your name? Karlos, I said. If Karlos took that – he looked me intently in the eye confident he had proved something to me – maybe it’d be worth $100,000 and maybe mine would only be $100. Or the other way around. It’s all just speculating, networking, stocks and interest rates. You’re predicting value that you can’t predict but we do it anyway. I don’t know how I left, but I did.

Those construction workers had wanted me to come back to see their photograph, but I knew I wasn’t going to. I walked past my dorm, listening to music that I’d known for longer than I’d like to admit; but now it was something else entirely, not ushering me into anything in particular, but ushering me nonetheless. I found myself lying down in my bed. Each polaroid had developed in my back pocket.