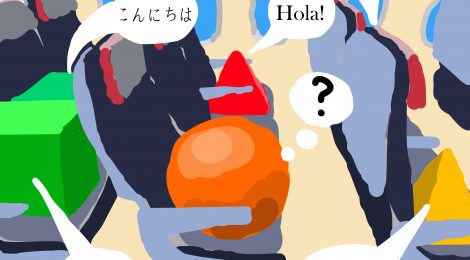 My aunt removed a tumor from her cervix last week. They spotted it in its second stage and had her schedule a surgery immediately. That’s how they do it in Korea. Prevention first.

I think my mom could’ve done that too, if she were still living there. But instead, we found out six months too late, and there was absolutely no way I could contribute towards her chemo. Her stubborn frown, the same thin and disapproving lips that I had, as I counted the sparse zeros in my bank account was only another deterrent.

That was how she was, my mother. Choosing solely to communicate through disgruntled facial expressions and weary body language, whether it was with me or a stranger. She hated speaking, because she knew her English would sound broken, incomprehensible even, to English speakers. She thought people would mock her when she said I go run to store fast instead of “I’m going to run to the store really quickly.”

And because she didn’t speak often, her being unable to fluently communicate in English and me being stupid enough to resist learning my mother tongue, I knew very little about my mom. She grew up under an abusive father, she had three brothers, her mother never loved her. Her family was poor, her uncle was a gambler, her grandmother sold all her gold for a shaman’s services. I picked up that much from her phone conversations with my now dead father’s family, but all she spoke of was her family and their struggles. Never anything about herself, what she felt about being the only girl of her family in a patriarchal society, how she managed to raise me as a single mother in a foreign country thousands of miles from home, why she never failed to give herself a break from decades of arduous physical labour.

This frustrated me but I never did anything about it. I would notice her worn shoes, but I never bought her new ones. I would see how young she looked in my parents’ wedding pictures, but I wouldn’t even glance at the skin products at the mall as I walked past Tony Moly with another pair of heels carefully placed into one of numerous shopping bags in my hands. I thought that she deserved nothing for the nothing she told me, and that it would force her to open up.

The permanent crease between her thin eyebrows deepened as her wrinkled and darkened hands deftly picked up my clothes lying on the living room floor. She started mumbling under her breath, knowing that I could hear her.

“Can you stop? You act as if all I do is lounge around all day. I had a reputable internship at Google, I graduated early, I’m constantly applying to jobs, and it’s still not enough for you. It’s hard for me too, okay? Do you think I like being unemployed for two years straight?”

“Stop speaking in Korean! I don’t know what you’re saying.”

“Oh my gosh, I’ll learn Korean! Is that what you want?”

Grabbing my wallet and coat, I stormed out of our house to go to a bookstore, where I grabbed a colourful beginner’s book. When I came back home, I didn’t acknowledge my mother, instead heading straight to my room and opening the book to the first page. Stupid.

But twenty-two years and a lifetime of unasked questions later, as I threw my hangul book across the room and decided that it was too late to learn Korean now, I realized that my excuses were absolute bullshit. I had a roof over my head. I graduated from a decent college. My mother funded all this despite having to work fourteen hours a day at a jeans factory, her fingers often stained blue as she packed my lunch early in the morning before hurrying out again to catch the bus. Perhaps there were too many things I had taken for granted, not being an immigrant myself, because I was too busy being angry at the kimchi that stunk up the whole classroom and my slanted eyes that everyone would make fun of.

As the book slammed into the wall and hit the ground, my mom opened my door and scowled at me, presumably nagging about me being loud, as if everything was normal and she wasn’t going to die in next year. I waved her off but she opened the door wider, planting her hands on her hips and pinning me down with the trademark Asian mom glare.

No, I did not do well on this interview either, I told her, and her eyes narrowed further.

“Eomma, I just need to relax okay? I’m not going to be jobless, and I certainly won’t be working at some odd factory job, alright?”

I couldn’t tell if she was hurt or relieved, because she didn’t change her posture in any way. Things had been especially tense between the two of us because of her recent news, but she acted like it was nothing, just as she had done her whole life. Conceal, suppress, keep it down, because you’re a mother and a wife and a daughter before you are a woman with needs. That’s how they do it in Korea.

She was looking at me without any expression in her face, or perhaps with an expression that I had not yet learned to read, and I was glaring back with a pout on my lips. An apt expression too, because she probably thought I was still a baby, unable to help her with anything and unwilling to do so. It frustrated me as well, that I never offered to wash the dishes or make the banchan, and my frustration toward myself for being so un-Korean manifested as constant anger toward my mom. My mom, who now had terminal cancer and still woke up at five everyday to make me breakfast before heading to work.

There was a silence, before we spoke at the same time. How odd it is that we had so often embraced the silence as we ate, watched TV, shopped online. I gestured for her to speak, and she reached into her pocket, pulling out an envelope and tossing it to me.

I poured out the heavy content of the worn envelope and picked up the rolls of coins. There was a passbook.

My mom didn’t say anything as she turned and left my room, shutting the door ever so quietly. I sat on my bed without moving and stared at the thick booklet in my left hand. Ten thousand dollars.

I wish I had said thank you for once.