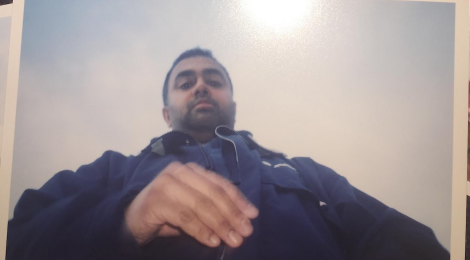 Easily Distracted and Wanders Off

IWB / December 22, 2019 / Comments Off on Easily Distracted and Wanders Off / family, Non-Fiction

I have never met anyone more averse to standing in one place for three consecutive seconds than my father. He takes any sort of crowded gathering, whether at an airport, elementary school recital, or college move-in, as an invitation to wander off, forget everyone he came with, and succumb to every distraction in his path.

He once lost my then-four-year-old cousin in the middle of a New York City farmers market, presumably because something shiny (read: a thick-cut piece of meat) caught his eye and he charged ahead of the waddling toddler to investigate. After five of the most terrifying minutes of his life (like my parents always say, the only thing worse than losing your own kid is losing someone else’s), he found my cousin snot-nosed and teary-eyed in the care of some teenager who didn’t know what he was signing up for when he got a summer job weighing strawberries at the Union Square Farmers Market.

I’ve never misplaced a small child, but I do find myself easily distracted and without much patience for slow walkers. Other qualities I attribute to my dad include my misplaced stinginess, hopelessly small bladder, and high spice tolerance.

As for our stinginess, I call it misplaced because it’s a cheapness that manifests itself in the most useless of circumstances and generally fails to come into play when some frugalness might be worthwhile. For one, my dad cannot resist a bargain; he’s that shopper who falls victim to the irresistible four-letter word plastered on storefronts in bright red, allowing the prospect of saving money on a new pair of running shoes to blind him from the fact that he wasn’t planning on buying a new pair of running shoes because he doesn’t even run.

I have never met anyone more averse to standing in one place for three consecutive seconds than my father.

My cheapness manifests itself through practices such as walking miles to avoid a five-dollar Uber, surviving high school off watered-down dollar coffee, and exclusively buying off-brand drugstore products (many people find this beneath them; when they walk the red carpet and someone asks if they’re wearing Advil or CVSHealth Ibuprofen, I hope it’s worth every penny). And obviously, I rip my makeup remover wipes in half, sometimes thirds, to maximize utility per pack. My uncle once told me that my dad taught him how to change a diaper, and made sure to stress the importance of ripping the baby wipes in half! (Though I find this a bit more hygienically questionable than stinginess with makeup remover, especially considering my role as unknowing victim)

If I had a better memory, I could count on more than one hand, maybe two, how many times throughout my childhood my dad came home bearing an oversized article of clothing for my brother or me, promising it’d look great once we grew into it, and preceding to shove said article of clothing into the back of a closet, to be found years later once it was three sizes too small.

But we live in the city, where will we hike?!

Brought back to his senses by the reasonable wife and offspring, twenty dollars too late! Might I mention, these purchases often occurred two hours into “running out for a sec to grab some milk” – by easily distracted and wanders off, I mean

My dad is a public defender, and while I don’t condone the stereotype of the incompetent public defender, he fits the image in the constantly flustered, perpetually late, always-testing-the-limits-of-how-close-to-the-deadline-he-can-start-things sort of way.

But as they say (I think), procrastination fosters creativity. He once got an acquittal for the leader of a small poker game, who faced federal changes under a gambling law intended to break up the Mafia, by calling an econometrics expert as a witness to prove that poker relies more on skill than chance, and thus doesn’t constitute gambling.

One of my dad’s favorite recurring bits plays off his deviation from the model minority stereotype. He laments that his parents, doctors from India, dropped the ball and let him pass by as a C student. Thus, he takes his role as an Asian parent very seriously.

In a 2011 episode of Glee called “Asian F,” Mike Chang, the Asian pre-med kid with a secret passion for hip-hop, quits glee club after his dad convinces him he won’t get into Harvard because he got an Asian F (an A–) on a chemistry exam. Ever since this concept crossed my dad’s radar via the Mike Change storyline, eight long years ago, my grades have been viewed exclusively through his imaginary Indian conversion chart. I think if he took a moment to reflect on the fact that he’s been fake-harassing me about Asian Fs for eight years, he might be a bit humbled about the creativity of his private stand-up routines.

His other favorite, almost as expired, recurring joke pokes at my mom’s most crippling and absurd insecurity. In a 2013 article dubbing Ted Cruz “The Distinguished Wacko Bird from Texas,” GQ magazine reported that, “As a law student at Harvard, he refused to study with anyone who hadn’t been an undergrad at Harvard, Princeton, or Yale. Says Damon Watson, one of Cruz’s law-school roommates: ‘He said he didn’t want anybody from ‘minor Ivies’ like Penn or Brown.’”

My dad still talks about how much this enraged my mom, a Brown alum herself. “You’ll never believe what Ted Cruz did!” She threw her newspaper aside in a fit of rage, and he prepared to hear about the senator’s latest attempt to repeal Obamacare or ensure 12-year-olds could exercise their god-given right to bear arms. Instead: “He called Brown a minor Ivy! He compared us to Penn! Brown is so much better!” Sure, the blatant elitism and basically everything Ted Cruz stands for disgust my mom, but nothing riles her up quite like the horror of hearing her alma mater equated to Penn!

It might be worth noting that my dad went to the University of Illinois at Urbana-Champaign, which he claims he barely got into, so these jokes are self-deprecating, not obnoxious. If an alumnus of Harvard, Yale or Princeton tries to pull this on you, you don’t have to take it!

My dad and his brothers were the only Indian kids in the Chicago suburb where they grew up. They were bombarded with ethnic slurs designated for Latinos, Sikhs, and Muslims, all of which they were not; occasionally, someone would be considerate enough to at least throw an accurate slur their way. Before his first day of kindergarten, my grandmother asked my dad if he wanted to go by Ken to make learning his name easier on classmates.

One of my dad’s favorite recurring bits plays off his deviation from the model minority stereotype.

As I so passionately divulged in a college application essay, “My dad immediately said no, his name was Kannan. Perhaps this five-year-old was just expressing his confusion with the idea of going by a name that was not his own, but at that moment my father chose a path. In the short term, he chose the butchering of his name, being called ‘Conan the Barbarian,’ and receiving words of hate, which were racially directed, but spurred by the fact that his name reflected something different and foreign. In the long term, he chose to continue identifying himself by his culture, to not succumb to the pressure to conform to societal norms.”

I am of course humiliated by this. And it probably goes without saying that my initial speculation, that a kindergartner was just confused as to why he would change his name, holds much more plausibility than the possibility that at age five he stood up and decided he was done succumbing to the pressure to conform to societal norms! Maybe if I didn’t write such cheesy BS I would be at a real Ivy right now.

← IHOB – LAXMAN SONI
Throwing a Hotdog Down a Hallway →