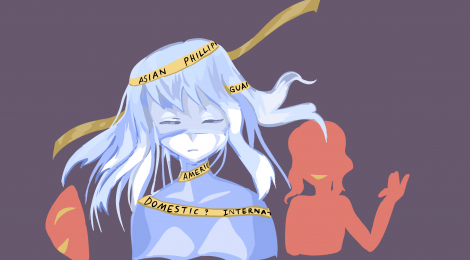 Introducing myself is easy enough, right? I thought so too, until I suddenly didn’t know who I am.

My first few weeks at Brown were composed of reiterating my name, where I’m from, and what I plan on studying, over and over again. I had a script that I would recite whenever I met someone new, but that script became inauthentic and insufficient the more I said it.

“Hi! My name is Aila. I’m from Guam, and I’m thinking about studying Political Science or Psychology. Nice to meet you!”

Guam, being an unincorporated United States territory in the Pacific Ocean, it’s not quite America yet also not quite international. What did that make me then? I traveled as far, if not even further, as international students from Asia. Am I considered a domestic student or an international student? How do I label myself? How do I explain the complicated history and politics involved in how Guam became the way that it is? While the residents of Guam hold U.S. citizenship, we are treated as second-class citizens. We are unable to vote for president, our representative in Congress is a non-voting member, and the infamous Insular Cases declared that full constitutional rights do not extend to the “alien races” of the territories.

When I think of the hundreds of years that the residents of Guam have “existed” in American soil without a voice and without their full constitutional rights—my simple explanation of where and what Guam is, seemed inadequate. I felt like I wasn’t giving justice to the place I call home, especially when I’m the only freshman here to represent the island that has been ignored for centuries.

But my dilemma didn’t end there. Guam may be home, but my roots grow back from the Philippines. And whenever I didn’t introduce myself as from the Philippines or as a Filipina, I felt like I was turning my back on the country that raised me until I was nine years old. I’m not just that girl from Guam, nor am I just that girl from the Philippines. I wonder if I can truly represent Guam when I’m not ethnically a Pacific Islander? By doing so, how can I preserve my identity as a Filipina at the same time? Suddenly, that script I had been reciting over and over seemed inaccurate, incomplete—it just wasn’t enough. Who am I? And who even cares to hear my story?

I labeled myself as “Asian” in the CommonApp, yet calling myself Asian-American doesn’t seem right. If you look at me, I don’t have the facial features one would typically associate with being Asian, and if you get to know me, you might find that I’m not very Asian after all. Too Filipino to be Asian. Too Asian to be American.

I say I’m from Guam, but my story runs deeper than that. Thank you for saying my English sounds great, but did you know Guam is an English-speaking territory?

We all have stories. We all have identities. Sometimes, we shorten those stories and identities into labels—to make it easier to explain and to prevent rambling and wasting someone else’s time. But sometimes, those labels are dysfunctional—they don’t always work. We are more than the tags and the labels we put on ourselves. We’re not movies, books, or songs that can be categorized into genres. Our life and the values we hold are not merely pictures that can be described by a short caption or a #hashtag.

Thinking about it now, I was unconsciously trying to find labels for myself—ribbons that neatly tie everything together, like I was some sort of present that needed to be wrapped and presented nicely to others. If you ask me now whether I am a domestic or international student, I still don’t have an answer for you. I don’t think I ever will, and I’m perfectly fine without those labels.

← I Dreamed a Dream
To the one I call mother →