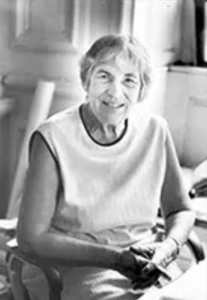 Both praised and critiqued, Antoinette Downing had an undeniable impact on the reshaping of Providence’s East Side, as well as on the field of historic preservation more widely. However, Downing’s work is relatively unrecognized, similar to the work of many women in architecture and its allied fields throughout the history of the discipline.

Downing was born Antoinette Forrester in Illinois in 1904 and studied art and literature at the University of Chicago before studying architecture at Radcliffe College (Harvard’s Graduate School of Design did not admit women until it absorbed the Cambridge School of Architecture and Landscape Architecture during World War II). At Chicago, Downing met her husband, George Downing, who would later move the couple to Providence, Rhode Island to become chair of the art department at Brown University. [1]

In Providence, Downing became an advocate for historic preservation, and played a key role in the founding of the Providence Preservation Society in response to the demolition of historic structures during the rapid expansion of Brown and the Rhode Island School of Design. She was integral to the writing of College Hill: A Demonstration Study of Historic Area Renewal, the plan for the historic rehabilitation and selective renewal of Providence’s East Side. However, in the plan’s credits page, her name is buried deep in a list of contributors and is masked by the convention of listing a married woman by her husband’s name. [2] 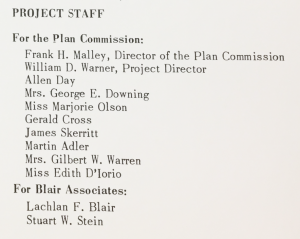 Downing’s advocacy left Providence’s East Side with a huge collection of preserved 18th and 19th century structures, a sharp contrast to the wholesale demolition characteristic of urban renewal in many other American cities. However, Downing often encountered critique from students at Brown who saw Downing’s effort through its side effect – the rapid displacement of low-income residents from the East Side following the area’s rehabilitation. [3]

Though which components Downing contributed to the College Hill Demonstration Study are unclear, the plan specifically proposed the wholesale demolition of the future memorial site, rather than the surgical, house-by-house rehabilitation that was implemented throughout much of the East Side. This hidden leader of historic preservation likely had a hand in the most recent evolution of the memorial site.