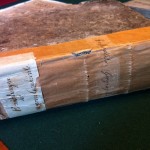 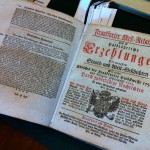 Eighteenth-century Germans were not as quick to recycle their news magazines as we are today, no doubt because they were printed much less frequently — just twice a year for the Frankfurter Meß-Relation, which the JCB has just acquired in a bound volume of 8 biannual issues covering the years 1756 to 1760. Published from 1590 to coincide with Spring and Fall fairs in Frankfurt, the “Relationes semestrales,” as this series is generally cited, reported on all matters domestic and foreign, including current events in the Americas, which for these particular issues included extensive coverage of the French and Indian War (1755-1763) and other news from the Spanish, Portuguese, and French colonies in the Americas.

The journal drew much of its material from government publications, ephemeral documents, and other newspapers and journals. Still, those reading it were generally digesting the information for the first time. From the Easter Fair issue of 1760, readers learned of the negotiated terms of surrender for the French forces at Fort Niagara that previous summer — in what might seem to the modern reader a surprising degree of detail. The soldiers were to surrender their weapons while retaining their baggage, and be transported as soon as possible to New York. Women in the fort were to be transported in the direction of Montreal, with exceptions made for any British subjects or women who wished to accompany their husbands. The sick and wounded were to be freed as soon as they were able to travel, and conveyed to safe locations; until that time, they were to be protected within the confines of the fort. The soldiers were not to be robbed or separated from their officers. Any Indians found within the fort were to be protected from assault and released from capture; munitions were to be inventoried and secured. The terms were signed by the officers present on July 25, 1759, permanently shutting down Fort Niagara as a French stronghold against British advances.

We would have been happy to add this volume at any time to our extensive collection of early European newspapers and serials relating to America, but given that we’re fast approaching the 250th anniversary of the 1763 Peace of Paris, the timing couldn’t have been better. (N.B., For a wide range of images from JCB books, manuscripts, and maps relating to the French and Indian War, try a subject search in our Archive of Early American Images, which you can link to here.)