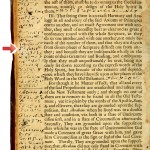 In our last post, team member Lucas Mason-Brown estimated that a full translation of the shorthand written in “An Essay Towards the Reconciling of Differences among Christians” could take years. Let’s take a closer look at the long slog that is translating colonial-era shorthand.

“At the end of the day, this is a proprietary, improvised scheme that wasn’t meant to communicate anything to anybody else,” Lucas says. In other words, Roger Williams (the probable author) used the shorthand to take personal notes. It needed to be accessible only to him, making accessibility a problem for others.

Beside the obstacles mentioned in the last post — Williams’ bad handwriting and employment of idiosyncratic symbols — stand his use of “defectives” and his spontaneous reversions to longhand.

The author of this shorthand considered the “y” extraneous. But for translators who do not know the context of a passage and are unfamiliar with the author’s system, matters are less clear. Is “bod” short for bodily? Bodice? Perhaps the author represented an “o” when he meant an “a.” Or perhaps you’re simply misreading his chicken-scratch handwriting.

And then there’s the author’s habit of inserting longhand words or phrases into the shorthand text on a whim. As the team began its work, the occasional longhand came as a blessing.

The longhand place names in the first half of the book and the longhand medical terms at the end have helped the team identify the types of texts being copied: geographical and medical dictionaries, respectively.

And the author’s habit of mixing longhand and shorthand within a word helped Lucas crack the code. For example, an elevated colon at the end of longhand place names like “paphlygon” and “anatol” established that symbol as shorthand for “ia.” For example, in the picture above, the longhand “lusit” followed by the shorthand symbol for N in the A position gives “lusitan.” The elevated colon makes it “Lusitania.”

But when it comes to going through the text and translating it, this mixing of shorthand and longhand will only complicate matters, especially given the similarity of certain shorthand symbols to longhand letters. For example, the shorthand symbol for H is indistinguishable from the letter O.

Since signing on to the project, Lucas has been corresponding with Frances Henderson, an Oxford academic and one of only a handful of experts in the world on early modern shorthand. Recently, he described to Henderson the litany of obstacles he’s discovered since cracking the shorthand scheme. “She told me I’d finally realized how slow this really is.”