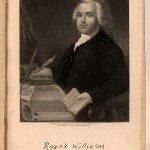 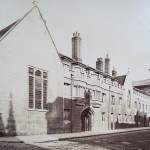 The group of students working to decipher the shorthand code in the margins of “An Essay Towards the Reconciling of Differences Among Christians” is hoping for a major breakthrough this week or next. The process of translating the 200-plus pages of highly abbreviated, messy shorthand, could take years. But the group believes that more than 90 percent of the shorthand is copied from two unidentified texts: One a geographical dictionary and the other a medical dictionary. This could offer a shortcut.

If the group can track down the texts from which the shorthand was copied, they can vastly increase the speed with which they’re able to translate it. Fortunately, they have some leads.

The shorthand is almost certainly written in the hand of Rhode Island founder, Roger Williams. Williams was banished from Massachusetts Bay Colony in January 1636. Harvard University was not founded until later that year, and it did not acquire a large library until 1639. This makes it likely that Williams copied the shorthand from sources on the other side of the Atlantic before coming to the New World.

“Nov Belgium,” more frequently known as “New Amsterdam,” refers to an area in the Mid-Atlantic region explored by Henry Hudson on behalf of the Netherlands in 1609. Roger Williams last visited England in the 1650s. So if he did access the source text there, it would have been written between these dates.

In England Williams attended Pembroke College at Cambridge (hence the name of Brown University’s now-defunct women’s co-ordinate college). The group has identified five other institutions in the UK whose libraries Williams might have accessed. By tomorrow, they will have catalogued in order all of the long-hand terms interspersed throughout the text.

The group will send the list of terms to manuscript librarians at Cambridge and the other institutions, asking them to identify any text in their holdings that contain those terms in that order, and that were written within the proper timeframe.

Then, they will cross their fingers and wait. Hopefully they won’t wait long: Unlike many researchers enlisting the help of manuscript librarians, they have only a semester to complete their project.