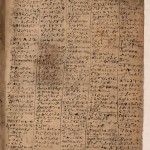 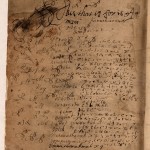 After meeting Wednesday with Brown University Professor of American Civilization Steven Lubar, the group is going to set their sights closer to home. Much closer to home. The pieces to the puzzle may all reside on Brown’s campus.

Many of the longhand terms in the geographical dictionary refer to sites in the New World. Conveniently, the John Carter Brown Library, which houses “An Essay Towards the Reconciling of Differences Among Christians,” has one of the world’s foremost collections of primary documents relating to the history of the Americas from this period. The group will begin working with the staff of the JCB to try to identify that source text among its holdings.

Regarding the medical dictionary, Lubar gave the group some good news and some bad news. The bad news is that medical dictionaries of that era were rarely written in the vernacular. Instead, they were written in Latin, the lingua franca of European science, complicating the task of identifying the source text and translating the shorthand.

The good news is that the other rare books library on the Brown campus, the John Hay Library, which is part of the Brown University Libraries, has an excellent collection of medical material. The group will try these local libraries before turning to institutions across the pond.

The group has also gleaned an encouraging hint from the mysterious middle section of shorthand. They believe this section contains personal notes, which would likely yield the greatest historical value. The section is also the most daunting, because it is largely devoid of longhand words that could give clues to its contents.

But in that section, group member Katharine Mead has found the longhand “Eliot” preceded by what looks like a shorthand representation of “JON.”

John Eliot was a 17th-century Puritan missionary in New England. He translated the Bible into Algonquin  for use in converting local Indians. It was the first Bible printed in the New World. Williams is known to have had a relationship with Eliot, adding to the plausibility that the section contains original notes.

And, in yet another intriguing twist, the Hay owns one of the most important copies of what is commonly known as the Eliot Bible – the one that contains shorthand notes believed to be written by Roger Williams.