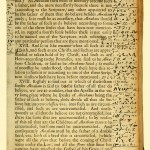 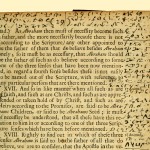 These are the first 24 words deciphered and translated from the shorthand in “An Essay Towards the Reconciling of Differences Among Christians.”

Even translating this short passage, which was selected for the relative clarity of the handwriting, was a long, arduous process, according to team member Lucas Mason-Brown, who described his tentative translation as “a very rough draft.”

But Mason-Brown said the passage is historically accurate, bolstering confidence that the translation, too, is accurate.

Though this passage does concern “Differences Among Christians,” the team does not believe this section of the shorthand relates directly to the text of the treatise.

They have just compiled a list of the several hundred longhand terms that pop up among the shorthand, and though “Zwingli” appears more than once, the astonishing range of terms does not point to purely theological subject matter.

The first section alone includes European place names like Utrecht, Antwerp, and Venetia; dates including 1300 and 1481; and ancient figures such as the Roman “Marius” and the Spartan lawgiver, Lycurgus. It mentions the Roman deities, Neptune and Proteus, but also Borneo and Java.

And at page 125, the terms cross the Atlantic. Here we get Florida, Virginia, Cortez and Andes, among others.

According to Mason-Brown, the array of terms has the group reexamining the geographical dictionary hypothesis. Their current hypothesis is that the text is a world history of some sort.

If all these terms do in fact come from a single source, whatever it may be, it would be a fascinating text indeed.

And if the team can track down the source text or texts, the next 24 words may come more easily.