The group gained access Friday to letters long held by the Rhode Island Historical Society that have helped to confirm that Williams did indeed write out the shorthand contained in “An Essay Towards the Reconciling of Differences Among Christians.”

One of the letters, which are all written by Williams, contains a three-line block of shorthand at the end. “The handwriting matches exactly and so do the characters,” said team-member Lucas Mason-Brown. But because the shorthand is so brief and contains no longhand flags to provide clues to its context, “I don’t think you can glean anything about the workings of the language.”

Mason-Brown added that the English in the letters is more archaic than he had expected. “Some of my confusion about his use of shorthand probably has something to do with his use of English.”

The group has one very tentative candidate for the source of the first section of the shorthand and is combing Brown’s holdings for more. The first candidate is Peter Heylyn and Edmund Bohun’s Cosmography in Four Books, Containing the Chorography and History of the Whole World and All the Principal Kingdoms, Provinces, Seas, and Isles Thereof. But its initial publishing date of 1652 means it’s pushing the upper bounds of the likely date range set by the group. 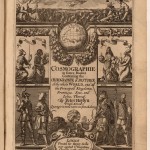 As the group continues to hunt for the source texts, Mason-Brown is exploring the relationship between the shorthand in this text and the John Hay Library’s Eliot Bible.

He is attempting to decipher the text surrounding the shorthand “JON” and the longhand “Eliot” discovered earlier this week by team member Katharine Mead in the middle section of shorthand. But so far, he has made no progress. This particular section of shorthand is “full of defectives,” or highly abbreviated, he said.

He has had more luck with the Eliot Bible itself. Mason-Brown inspected the Bible at the Hay, where in addition to the four pages of longhand at the end of the book, and the longhand on the book’s inside front cover, he discovered four new instances of shorthand in the middle of the book.

Three of the instances of shorthand are brief. The fourth instance completely covers the margins of two facing pages.

Meanwhile, the method the group is using right now to hunt for possible source texts will be familiar to many Brown students. They are searching the Library’s holdings online through the Josiah catalog system.