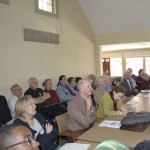 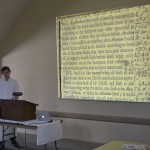 Lucas Mason-Brown presented on the decoding project’s progress and gave audience members a chance to slog through a translation at a lively JCB Fellows Lunch Talk April 11.

“We’re used to advanced history projects that are supposed to take a very long time to reach maturation,” said JCB Director Ted Widmer by way of introducing the project, which in a few months has reached some significant milestones in solving the 17th century mystery of Roger Williams’ shorthand code.

Though Mason-Brown was able to present on some early breakthroughs — cracking Williams’ code and identifying the source from which much of the shorthand is copied — the audience of about 50 gained an appreciation for the difficulties of translating Williams’ cipher.

One of the obstacles, Mason-Brown explained, is that very different arrangements of symbols can stand for the same word. To illustrate, he presented two configurations that could each be the code for “butter.”

“If things weren’t complicated enough, both of these things are valid codings for the word Beirut,” he added.

Williams’ inventiveness drew an appreciative laugh from audience members. “He gets kind of punny at times but I don’t really think it’s so funny,” Mason-Brown deadpanned.

To give audience members a taste of the work of translating, Mason-Brown led them through a shorthand passage on the Spaniards copied from Peter Heylin’s Cosmographie in Four Books.

Though audience members were given keys showing which shorthand symbols correspond to which letters of the alphabet, Mason-Brown had to spot the audience the first two characters. They were non-standard abbreviations Williams devised for the words “from” and “the.”

From there, audience members guessed with varying success at what letter each mark stood for.

“You kind of have to take my word for it,” said Mason-Brown as he explained that the centuries-old scrawl translated to “From the Jews they borrow superstition; from the Moors Melancholy; Pride from the Goths; and from the old Spaniards, the desire of Liberty.”

Following the presentation came a free-wheeling discussion between Mason-Brown and audience members, including prominent historians Jack Greene and Gordon Wood, about the historical context in which Williams jotted down the code.