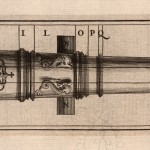 In the three years since the publication of Valeria Gauz’s bibliography, Portuguese and Brazilian Books in the JCB (2009), the JCB has continued to add significantly to the holdings in this area.  But with a single purchase this winter from the bookseller Richard Ramer, who assisted with the editing of the Gauz volume, we added yet another 72 Portuguese and Brazilian volumes to the Library’s already outstanding collection. Some of the gems of the purchase include Alpoim’s Exame de artilheiros (Lisbon, 1744) and the 1755 Lisbon edition of Vieira’s Historia do futuro. The Alpoim work, along with his Exame de bombeiros (which we purchased in 1963), was once thought to have been printed in Rio de Janeiro, which made it especially desirable to collectors. No longer thought to be the case, the two books are still scarce editions, and we are delighted finally to own both of them. The 1755 edition of Vieira’s Historia do futuro is important for its much greater scarcity in relation to the first edition of the same work, possibly owing to the earthquake that devastated Lisbon in that same year. In this post we look a little more closely at one of the plates from Alpoim’s Exame de artilheiros:

An important witness to the rebirth of the study of mathematics and engineering in the Portuguese Empire, Alpoim’s Exame de Artilheiros deals specifically with artillery. It was the first “textbook” on military engineering written by a Brazilian, the second being the same author’s Exame de bombeiros (Lisbon, 1748), which deals with military bombardment. Alpoim was born in Rio de Janeiro and served as professor at the Aula de Fortificação in Rio, achieving the rank of brigadier by the time of his death in 1770. Adding to its rarity is the fact that the Exame de Artilheiros was banned by a Carta Regia of 15 July 1744, on the grounds that it did not comply with pragmatic rules for use of military titles. The particularly handsome plate that is reproduced here corresponds to question 223 of the Exame, “Tomàra ver notadas todas estas partes em huma peça?” (Can you identify all the parts of this bronze cannon – in Portuguese? See above for illustration, see below for the key.)

The key to question 223 of the Exame de Artilheiros: “Facilmente se faz: as peças de bronze tem as partes seguintes.”