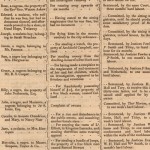 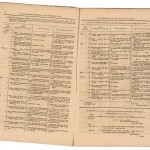 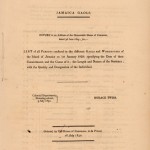 Jamaica gaols. Return to an address of the honourable House of Commons, dated 3d June 1829; for,–list of all persons confined in the different gaols and workhouses of the island of Jamaica on 1st January 1829; specifying the date of their commitment, and the cause of it; the length and nature of the sentence; with the quality and designation of the individual, [London]: Ordered, by the House of Commons, to be printed, 16 July 1830.
JCB Call Number: DB .G7875 1830 1 2-SIZE

Back in 2007, the Library acquired 258 Parliamentary reports, treaties, and other miscellaneous papers relating to the slave trade in the British colonies in the second and third decades of the 19th century. Until now, because of other projects which had to take precedence, these languished in the stacks. Now, however, I have time to pay attention to them. Most, so far, have been “unremarkable” and somewhat dry reports focusing on correspondence and standard statistical information from the British West Indies and East Indies.

Among what I have done so far, one most definitely gained my interest. Jamaica gaols, issued as a Parliamentary report on 16 July 1830 documents various infractions and the punishments inflicted on those imprisoned in jails and workhouses on the island. Transmitted by Somerset Lowry-Corry, Earl to Belmore (1772-1841), who served as Captain-General and Governor-in-Chief of Jamaica between 1828 and 1832, to Sir George Murray (1772-1846), principal secretary of State for the Colonial Department, it serves as a reminder of just how brutal life could be in Jamaica before slavery was abolished there in 1838.

Many of those imprisoned in jails and workhouses were classified as black or mulatto slaves. Some were branded as “incorrigible runaways” and many of these given a life sentence, such as Robert Facey of the Ramble Estate, sentenced on 20 January to be a prisoner of the Clarendon Workhouse (p. 4), or a slave named Frank, who was sentenced on 12 May by the Slave Court, and confined in Port Royal Workhouse (p. 4). Not all were black or mulatto slaves. Three convicts, named Thomas White, Richard Johns, and Thomas Atkinson, were white seamen, sentenced to 20 days in the Port Royal Workhouse, for refusing to do their duty on board ship (p. 5).

Punishment was grave even for minor, and even silly, infractions. Witness the sentence of Joseph, a mulatto boy belonging to Sarah Strachan, who was confined to the Kingston Workhouse on 4 February  for “flying kites in the streets, contrary to the city ordinance” (p. 6). Boys will be boys but Joseph’s sentence of thirty days hard labor was exceedingly cruel. Women also suffered at the hands of the magistrates. Grace, a Negress belonging to Mr. R.S. Cooper, was sentenced to the Workhouse in Kingston on 19 March for “having made a complaint to the magistrates of mal-treatment of her and her children, which, on investigation, appeared to be frivolous and vexatious” (p. 6). Grace was also sentenced by Justices Smith and Nethersole to a month’s hard labor.

Not all black and mulatto slaves were imprisoned for “uppity conduct” towards their owners. Some were sentences for infractions against free blacks or other black or mulatto slaves. Another woman sentenced to a week’s hard labor at the Kingston Workhouse was Bessy, a Negress, owned by Lydia Bradbury, who was imprisoned on 12 May for stealing a fowl from a free black woman with the surname of James (p. 6). In the parish of St. George a Negro slave  named Robert Duncan, owned by Samuel Sutherland, was sentenced on 7 January by the Slave Court for “assaulting and biting off the ear of Charles Desgouttes, a slave” (p. 16). Robert Duncan incurred a sentence of hard labor for three months and thirty nine lashes on going in …. and the same amount on coming out. Many slaves were also given thirty nine lashes on going in and coming out for riotous conduct, cutting canes with intent to steal, or merely because of running away.

Perhaps one of the most interesting sections can be found on p. 8-9, in which those confined to the workhouse in the parish of Saint Catherine are classified by their crimes, sentences, dates of commitment, qualifications, and designations. Those in this section are all slaves, either black or mulatto, and further classified by being African or Creole. Their qualifications (chores) and designations (behaviors) are most interesting. For example there was Simon, a Creole, belonging to Robert A. Kayle, an incorrigible runaway, sentenced to hard labor for life, whose qualifications and designations were given as “one leg; cook” and “ill behaved, and riotous”; whereas Wiltshire, an Creole slave of Spring Vale Estate, was a well behaved one legged cook. One sees more than a few maimed slaves in the workhouse of the parish of Saint Catherine!! William Henry, a Creole slave belonging to John Hanson, was given hard labor for life for sheep stealing and was categorized as “well behaved when sober”. Bessy, a Creole slave and field worker belonging to Mary Davies, was also a runaway but her qualifications and designation were given as “useless” and “quietly disposed”, which sounds very sinister when one really thinks about that.

In the final section of the report we have a list of Negro slaves in the St. James Workhouse who were released and to whom they were released. Most were released into the care of their owners or those from their estates. Others, however, were more fortunate to have escaped (a slave named John, owned by Alexander Ray, p. 18-19), several who were “released pursuant to sentence”, or even a slave named Chance, belonging to the Rosehall estate, who was released by order of the sitting magistrates (p. 20-21).

Reading though documents like this are illuminating for many reasons. One can actually see the real people and circumstances of their lives as slaves and the tight reins under which they were controlled. One could use this document for genealogical purposes as well as for social history purposes. Regardless, it is documents such as this report which make the cruel facts of life for a black or mulatto slave, or even a disobedient white seaman, very real and vivid in color.