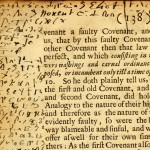 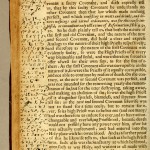 Early this spring, the JCB announced some very exciting news. The team of undergraduates working with the JCB to crack, translate, and contextualize the mysterious shorthand code scrawled in the margins of the JCB’s “An Essay Towards the Reconciling of Differences Among Christians” had made substantial progress towards at least two of our objectives. Using various statistical techniques and knowledge of popular 17th century shorthand schemes, we uncovered a tentative key. Using this key, we were able to successfully translate over 180 pages of encoded marginalia. We also discovered:

For various reasons, the middle section proved particularly difficult to translate. For one, whereas the first and third sections exhibit a mixture of shorthand and longhand marginalia, the middle section is written almost entirely in shorthand. Moreover, text in the middle section appears in a highly abbreviated form. At certain points, entire words appear to have been condensed into a single code character, standing for the first or last letter in that word.

I have spent the past several months hard at work on this portion of notes. Finally, after dozens of failed attempts, I managed to translate several scattered fragments of code, which provide some insight into the subject matter of the middle section. The first few lines of code are a sort of heading:

“A brief reply to a small book written by John Eliot called, ‘An Answer to John Norcot Against Infant Baptism,’ a plea to people of the flock of Christ.”

This requires some explaining. John Eliot was a prominent Massachusetts Puritan. Puritans, in contrast to Baptists, believed in the practice infant baptism. In fact, citizens of Massachusetts were required by law to baptize their infants – a law designed to drive the Baptists out of Massachusetts. Eliot’s book, A Brief Answer to a Small Book Written by John Norcot Against Infant Baptism (1679) was the puritan rebuttal to Baptist John Norcot’s, Baptism Discovered Plainly and Faithfully, According to the Word of God (1672) which argued against the baptism of infants. Both of these books were published as part of a larger debate between the Baptists and the infant-baptizing Puritans, which raged throughout the 17th century.

In the middle section, Roger Williams appears to be commenting on this debate, providing what looks like a rebuttal to a rebuttal to John Norcot’s small book, substantiated by original scriptural arguments.

In another one of the fragments I translated, Williams defends Norcot by cleverly turning Eliot’s words against him:

“John Eliot [fears] the author [Norcot] to be a Godly though erring brother who, acting the cause of a roaring lion, craftily seeks to devour the poor lambs of Christ. Though his own voice sounds [like] the voice of a grievous wolf who will enter among us and devour the lambs of the flock of the Christ (Acts 20:29)”

Though many questions remain unanswered, one thing is for certain: at least some of the notes appearing in “An Essay Towards the Reconciling of Difference Among Christians” were taken after 1679 (when Eliot’s book was first published). This has two important implications: first, it indicates that the issue of infant baptism remained an important issue for Roger Williams up until his death (Roger Williams died in 1683, at most four years after these notes were taken). Second, it tells us that “An Essay…” was in America around the time of Roger Williams’ death. This contradicts our previous hypothesis that all of the notes were taken between 1652 and 1654, during Williams’ final trip back to England.

Personally, I am very excited about these discoveries. I hope to have more for you soon.