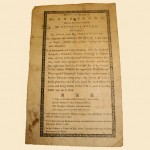 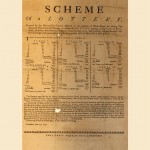 In conjunction with the Rhode Island Center for the Book 2012 Art of the Book Program, Rhode Island Broadsides Rule!,  the John Carter Brown Library presents examples of broadsides printed by John Carter—a significant figure in the history of printing in Rhode Island and in the family history of our Library’s founder.

Born in Philadelphia and trained by Benjamin Franklin, John Carter came to Providence in 1767 and worked with the Goddard family to produce the Providence Gazette. Eventually the sole proprietor of the newspaper, Carter served as a leading editorial voice and prolific printer until 1814. In addition to the Gazette, his press produced books, currency, blank forms, and broadsides. The broadsides on display in the JCB’s reading room serve as bulletins for news of events and activities large and small—as public as a lottery to raise funds to build the Baptist meeting house and as personal as the death of a beloved family member.

Attributed to John Carter’s press, this memorial broadside is particularly poignant, as Ann Brown was John Carter’s eldest daughter. She was the mother of John Carter Brown, the founder of this Library.

“Scheme of a lottery, granted by the Honourable General Assembly of the colony of Rhode-Island, for raising two thousand pounds lawful money, to enable the Baptist Society, in the town of Providence, to defray the additional expence of purchasing a lot, and building a house thereon . . .,”  Providence, Printed by John Carter, at Shakespear’s Head, [1774]

When money was in short supply and taxation was limited, lotteries provided a method of raising funds for civic projects—from the construction and maintenance of roads and bridges to the building of churches, schools, and meeting houses. The Brown family was involved in running the lottery for the building of a meeting house for the Baptist Society—which now still stands as the First Baptist Church on North Main Street. Earlier, the Browns had also participated in the lottery to raise funds for building a market house—the tickets for which can be viewed in Case 5 of the Reading Room.

The imprint gives the address of the press as “Shakespear’s Head.” The building was originally used by William Goddard, and still stands at 21 Meeting Street. It currently houses the Providence Preservation Society.

Broadsides often served as bulletins alerting the public to crimes committed and rewards offered—such as this notice of a break-in posted by John Tillinghast.