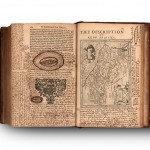 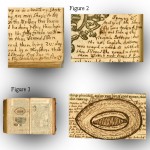 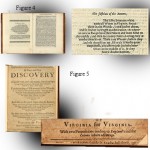 By Janice Neri and Danielle Skeehan

See this article also at I Found It at the JCB.

It was a classic tale of “who done it”—someone had violated the pages of a seventeenth-century atlas at the John Carter Brown Library, and in July 2012 two scholars set out to discover who that “who” was. The suspects had recorded—and illustrated—what appears to be a conversation about silkworms in the margins of a 1635 edition of Gerhard Mercator’s Atlas; or, A geographicke description of the world. Upon further investigation it became clear that where one text ended, another began.

We believe this “second” text to be an early manuscript version of The reformed Virginian silk-worm published in London in 1655 and attributed to Virginia Ferrar of Little Gidding in Huntingdonshire, England. The marginal annotations in the Mercator volume seem to be composed as a series of written conversations between Virginia Ferrar and her father John Ferrar over the course of several years. These annotations closely parallel the printed editions of The reformed Virginian silk-worm in both content and concept: the printed text is also presented as a collection of letters, correspondence, and “advertisements” authored by Virginia and John Ferrar, with additional material from Edward Digges, who was Governor of Virginia between 1655 and 1656, as well as the writer and “intellegencer” Samuel Hartlib. In other words, conversations that began in the margins of Mercator’s atlas generated a wider circle of correspondence that stretched from Huntingdonshire to London and across the Atlantic. The conversations recorded in the atlas and “re-formed” in printed editions of Virginia Ferrar’s text invite us to think about how early moderns used, read, and re-used books, and remind us that books are material objects, as well as conveyors of information—that they have writers, readers, and users. John and Virginia Ferrar occupy all three of these roles: as they read through the atlas, they responded by writing in the margins—both to each other and to the printed text—and as these annotations were transformed into print, they generated new users as well.

Facts and Evidence
The annotations in Mercator’s Atlas appear very likely to have been written by John Ferrar and his daughter Virginia Ferrar in the early 1650s, prior to the publication of The reformed Virginian Silk-worm in 1655. At least two different hands are present, and each writer occasionally employs a personal mark to distinguish their contributions. Virginia Ferrar uses a stylized “V” at the end of her annotations [figure 2]. Another annotator—most likely John—uses a symbol consisting of a drawing of a hand with a finger pointing to the text in order to draw attention to significant passages. John also signs his initials on page 904 after a passage written by Virginia describing the differences between wild silkworms found in Virginia and those used in the European silk industry. He affirms her account by stating “this is most true: J F.”

Two of the annotations are dated 1653 (p. 903) and 1654 (p. 905). The dated annotation on page 903 states that it was written after the annotations on page 904, which concern the wild Virginia silkworm. If not a completed manuscript, the content of the annotations on page 904 do reveal a stage in the development of the ideas contained in the published text. The publishing history of The reformed Virginian silk-worm itself is very complicated, having appeared in a preliminary form in 1652 under the title Glory be to God on high, peace on earth, good will amongst men. : A rare and new discovery of a speedy way, and easie means, found out by a young lady in England…For the feeding of silk-worms in the woods, on the mulberry-tree-leaves in Virginia.

Other marginal annotations in the volume draw the reader’s attention to curiosities of the human and natural world, with an emphasis on items with the potential to be exploited for financial gain. The annotators pay special attention to passages in the text concerning silk production in China and Persia, and often discuss the text in connection to plantations in Virginia and the Caribbean. The Ferrar family maintained a strong interest in the Virginia colony throughout the seventeenth century, and John and Virginia Ferrar engaged in extensive correspondence with people living in and associated with the region. The annotations include several references to information obtained from correspondents in the Virginia colony, and a particular reference to a letter from the Ferrar’s friend Edward Digges, which is included in the 1655 edition of The reformed Virginian silk-worm.

Interdisciplinary Perspectives
After establishing the identity of the annotators of the Mercator volume, our conversations turned to the many connections between its contents and our own individual research interests. Both Skeehan and Neri will further explore Virginia Ferrar and her circle in their ongoing individual projects. Skeehan’s dissertation, “Creole Domesticity: Women, Commerce, and Kinship” explores how textile networks produced an Atlantic archive of shared practices, materials, and discourses rooted in the production and consumption of domestic commodities and domestic labor. These networks reveal the possibility of shared oral and tactile “literacies” that connect women of different classes, races, and regions. Neri’s recent book, The Insect and the Image: Visualizing Nature in Early Modern Europe, 1500-1700 (University of Minnesota Press, 2011), examines images of insects in a multitude of sixteenth- and seventeenth-century contexts. Neri is now working on a project on the intersection of science, decorative arts, and luxury trades in early modern Europe.

For historians of science and visual culture, the annotations in the Mercator atlas present numerous examples of the ways that the emerging language of experiment was integrated with the production of visual images and the construction of authority. Virginia Ferrar’s delicate pen drawings of silk worm cocoons (or “bottoms”) seek to convey the differences between Old World and New World silk worms. Her investigations led her to believe that New World silk worms could yield larger quantities of silk because they were much larger and spun a double cocoon. Virginia Ferrar spins her words into the fabric of the insect’s form, her curving script echoing the inner and outer surfaces of the cocoon. “This is the second inwarde bottom wherein the worm lyes,” she writes inside the drawing [Figure 3]. Other parts of the drawings are labeled, and the annotations go on to describe the observations made by Virginia Ferrar and others while raising silk worms in their gardens. Through her words and images Ferrar seeks to convince her audience that the Virginia silk worms are wondrous creatures worthy of their admiration, attention, and effort. At the same time, she attempts to lay claim to a new area of knowledge of nature by emphasizing the quality of her written and visual observations through an accretion of dense detail.

For literary scholars, the connections between the annotations in the Mercator volume and The reformed Virginian silk-worm offer insights into how women negotiated a world of letters dominated by men, and participated directly and imaginatively in the project of New World colonialism. Like many seventeenth-century texts penned by women, Virginia Ferrar’s words are couched within the authorized and authorizing preface of a male editor—in the case of the annotations that person is her father and in printed editions the role falls to Samuel Hartlib; however, her experiments with form, style, and authorial voice provide some evidence for how she may have actively navigated this gendered position. The printed text shifts font styles and sizes from section to section to mimic the introduction of new authorizing voices, and her impersonation of a male editorial voice in sections of printed versions attributed directly to her blurs the lines between Virginia’s contributions and the authorizing presence of male voices. Moreover, as her words and illustrations travel from the margins of Mercator’s atlas into print, she too transforms from commentator into author. She playfully refers to processes of transformation and “re-forming” in the title of her published tract, and draws parallels between the process of composition and that of sericulture: previous editions and penned drafts are woven, unwoven, and rewoven into new forms, just as the silkworm’s cocoon is unwoven and re-spun or re-formed into a new object. We see these processes of textual composition and textile production overlap, quite literally, in her use of a pattern poem to describe the silk cocoon. Not only does this seem to be a printed reproduction of the penned illustration in Mercator’s atlas, but it also represents another transformation—that of image into text [figure 4].

Conclusions and some questions for further research
The conversations in and about the Mercator volume raise intriguing questions that still remain to be answered. Further research on Virginia Ferrar’s work with silkworms will rely on close study of established scholarship in a number of different areas, as well as further reading and examination of primary sources. The Ferrar family was closely involved with the Virginia Company of London until its dissolution in 1624. Shortly after this date, the Ferrars moved to Huntingdonshire where they established a small community around their estate Little Gidding. Focused on religious education, the activities at Little Gidding also included bookbinding, embroidery, art collecting, and of course raising silk worms. Named for the colony of Virginia, Virginia Ferrar expressed a life-long investment in the prosperity of the New World settlement. She acted as her father’s amanuensis, penning much of his correspondence with Virginia planters.

Virginia Ferrar and John Ferrar were also involved in cartography, publishing a map of Virginia in 1651 which is now known as the Ferrar Map. Evidence suggests that they collaborated on a number of projects, including A Perfect Description of Virginia (attributed to John Ferrar, 1649), the Ferrar Map, and—as the marginal notations in the Mercator volume suggest—The reformed Virginian silk-worm. Some of the annotations in the JCB’s Mercator volume are written on a map of Virginia, though it is not clear in whose hand. It is possible that further study of these annotations will reveal connections to the Ferrar Map and the several states of it that were issued in the early 1650’s.

While this collection of texts sheds light on Virginia Ferrar and her circle, it also inevitably represents her connections to an ever-widening network of readers, writers, and thinkers invested in the future prosperity of Virginia. Evidence of this extended circle of conversation appears in another annotation, this one in the title page of one of the only extant copies of Virginia Ferrar’s Glory be to God (1652), held at the JCB. Under the printed words a “Prayer of Virginia for Virginia,” an unknown seventeenth-century reader inscribed the following: “the daughter of Mr. Ananias Dare born 18 of Aug: 1587 being on the Island of Roanoke…” [figure 5]. The inscription refers to Virginia Dare, one of the first English children to be born in the New World, and the youngest member of the Lost Colony of Roanoke. What connections exist between Virginia Dare, Virginia Ferrar, and the Colony of Virginia, we invite you our, dear readers, to explore.

Janice Neri, Boise State University, and Danielle Skeehan, Northeastern University, were both fellows at the JCB during the summer of 2012. It was their proximity to each other, their shared interests, and the previous fortuitous discovery of the marginalia on a Mercator’s Atlas by one of the JCB staff which led to the fascinating revelations found in this article.