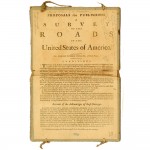 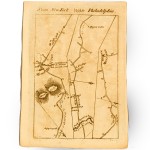 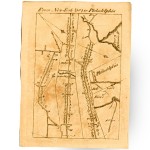 See this article also at I Found It at the JCB.

The American Automobile Association was founded on March 4, 1902, in Chicago, Illinois when, in response to a lack of roads and highways suitable for automobiles, nine motor clubs with a total of 1,500 members banded together to form the Triple-A. The first TripTik routings were produced in 1937, but the TripTik was really nothing new. As early as 1789, Christopher Colles had published his Survey of the Roads of the United States. His Survey consisted of 83 strip maps of roads covering the area from Albany to Annapolis. Each section covered twelve miles of road at a scale of 1 to 4/7 inch of a mile. Precise notation of distance was made possible by Colles’s use of a perambulator that measured mileage by revolutions of a wheel attached to the back of a carriage. Each section looked remarkably like a page from AAA’s master idea.

Christopher Colles was an Irish-born engineer and surveyor and man of constant ideas, one of which was the idea of mapping roads in the early United States in great detail. Unfortunately he was forced to bring his strip road map project to an end in 1792 after he failed to find enough subscriptions to carry on the work. He did manage to map about 1000 miles, however, and those maps are very interesting for understanding the developing road systems in the developing nation of the United States. Each plate, which has three maps to a page, shows major landmarks— rivers, settlements, terrain—that a traveler would cross traversing the route. Colles’s unique subscription idea was that he would let subscribers purchase only the parts of the route that they were interested in travelling.

An innovator of restless energy, Colles is also credited with the idea for waterway transportation which was achieved by the Erie Canal, he established the first water distribution system for New York City, and he had the idea for an optical telegraph system. Another of his more wacky ideas, which never saw fruition, was to build a Timber Canal thereby achieving two goals—to build a canal above ground (doing away with the bother and expense of digging) and to get rid of the abundance of trees in the nation (by using lumber to build the wood-lined canals) which were “now constantly burning and rotting away.” (1)

Discouraged at the end of his life by his lack of success, he wrote to John Wakefield Francis, his friend and his earliest biographer, “Had I been brought up a hatter, people would have come into the world without heads.” (2) Had he been born in the twentieth century instead of the eighteenth, he might have a major company under his direction.

1. Colles, Proposal for a Design for the Promotion of the Interests of the United States of America. New York, 1808, p. 6
2. Francis, John Wakefield. “Reminiscences of Christopher Colles”. The Atlantic Souvenir. New York, 1859, p. 183.