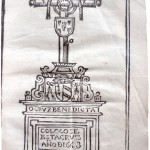 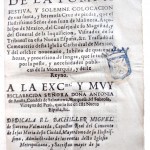 Barcena Valmaceda’s Relación recounts an incident in the town of Tepeapulco, an indigenous ceremonial site 12 leagues northeast of Mexico City, located at the foot of the Sierra de Puebla. Archbishop Juan de Mañozca visited Tepeapulco during a mid-seventeenth century inspection tour, accompanied by the author and another clerical assistant, Jacinto de la Serna, and there found a great stone cross erected nearly a century before and now forgotten in a cemetery overgrown with a “forest of brambles, thorns and cacti.” So impressed with the cross’s size and its memorial value recalling the early Franciscan missionary activity in the area, Mañozca negotiated its transfer from Tepeapulco to a central location in the atrium of Mexico City’s metropolitan cathedral in exchange for 100 pesos toward rebuilding the community’s local church. The majority of the Relación, some forty-nine pages, records the poetry, music, and religious oratory performed during the dedication ceremony for the re-named “cruz de Mañozca”.[i]

The seemingly straightforward record of a commemoration ceremony neatly papers over a more delicately layered, complex history of religious politics. The Sierra de Puebla was a borderland region to the pre-Hispanic imperial culture of the Triple Alliance, whose rival Mexica and Texcocan leaders each struggled to consolidate their own control over the region. Spanish incursions into local politics and territorial conflicts in the early sixteenth century displaced local connections to Indigenous imperial religious structures and led to the foundation of Catholic institutions in the region, including a convent in Tepeapulco. Following the disruption of imperial religious infrastructure, itinerant Indigenous religious specialists like Martín Ocelotl and Andrés Mixcoatl vied for leadership of local religious practices, and met their ends at the judgment of the first local Inquisitions led Franciscan Archbishop Juan de Zumarraga in the mid-sixteenth century.[ii]

The relocation and renaming of the “cruz de Mañozca,” then, works symbolically at several levels to consolidate and redistribute power in seventeenth-century Mexico City. The cross’s transfer both celebrates and harnesses the power of the mendicant religious traditions of Catholic evangelism and Inquisition in colonial Mexico under the Archbishop’s authority.[iii] Mañozca had only recently arrived in Mexico City after founding a new tribunal of the Inquisition in Cartagena and, in 1648, was planning Mexico City’s largest and most horrific public spectacle of Inquisitorial prosecution: the great Auto de Fé of 1649. The intricate threads of religious culture woven together in this document helped me understand how, a short decade later, Mañozca’s two assistants – Miguel de Barcena Valmaceda and Jacinto de la Serna – could work in concert as founding members of the Venerable Unión de Clérigos Presbíteros, a fledgling devotional group in the city dedicated to Oratorian spirituality in the name of San Felipe Neri, and use their public images to draw new initiates by the hundreds.[iv]

[ii] Helpful analyses of the sixteenth-century history of Tepeapulco and its inhabitants can be found in Davíd Tavárez, The Invisible War: Indigenous Devotions and Dissent in Colonial Mexico (Stanford: Stanford University Press, 2012) and Patricia Lopes Don, Bonfires of Culture: Franciscans, Indigenous Leaders, and the Inquisition in Early Mexico, 1524-1540, (Norman: University of Oklahoma Press, 2010).