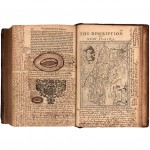 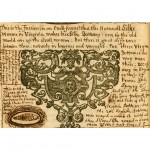 Let me belatedly congratulate Janice Neri and Danielle Skeehan on their identification of the anonymous author who annotated the John Carter Brown’s 1635 first English edition copy of Mercator’s Atlas, and let me also declare a very much more than passing interest in their linking of the author with Little Gidding. Read their article here. As the editor of the Ferrar Papers at Magdalene College, Cambridge, I have been aware that, though the papers survived, the family’s library did not. It is therefore good to know of the survival of another volume from it.  Few volumes from what was once a large collection have been identified; one has found its way to the New York Public Library, the Virginia Historical Society in Richmond has another, two (after wanderings) are at Little Gidding, and all, like the JCB’s Atlas, are annotated by John Ferrar.  He was very much a man of his time, conversing—not to say, at times remonstrating—with his books as he read them. Peter Thompson, in a discovery remarkably similar to that carried out by Neri and Skeehan, identified Ferrar’s hand in the copy of William Bullock’s Virginia Impartially Examined (1649), now in the Bodleian Library at Oxford, and reported on it in the William and Mary Quarterly in 2004.

In the Atlas, as was his wont, Ferrar underlined the text, sketched manicules to point to matters of interest, wrote brief comments in the margins, and on more than one occasion provided what amount to essays on silkworms.  His writing varies from a small but neat hand at times to pinched hen-scratchings at others, almost a shorthand, and this fact has, I think, misled Neri and Skeehan into attributing the comments in the Atlas to John and his daughter Virginia.  In fact her handwriting was noticeably larger than her father’s—not quite childish but suggesting only an intermittent acquaintance with quill and ink—and can be seen in the Ferrar papers for some forty years.  It never resembles anything written in the Atlas.

Neri and Skeehan have perhaps been further misled by the fact that John Ferrar, like his younger brother Nicholas embraced anonymity. At one point when seeking information about the possible colonization of Carolana, he even used a pseudonym (“John Smith”) when drafting his enquiry, Diffident by nature; it seems he had been made more diffident by his close call with bankruptcy in 1625.  Saved by the negotiating skills of Nicholas, John deferred to him thereafter out of admiration and gratitude, to the chagrin of his wife, Bathsheba.  She was further enraged by the family’s consequent move to Little Gidding.  In 1615, coming as she did from aldermanic circles, she had thought she was wedding a coming City man, but now found herself ‘exiled’ from London.  Irritated by her husband’s subservience to his brother, as she saw it, she quarreled with both, fled to London whenever she could, and kept her daughter Virginia as much as possible from Nicholas’s influence.

Virginia thus grew up amid domestic tensions. The evidence of her surviving correspondence suggests that she was fond of both parents, but was closer to her father.  He in turn watched over her, and credited her with activities and interests that were more strictly his own.  In 1640 when another biblical harmony was created, John gave the credit for it to Virginia, aged 12.  It survives at Ickworth in Suffolk, and is now the property of the National Trust. Nothing in it can be safely attributed to Virginia.  All the manuscript entries are in John’s hand, and if Virginia contributed anything, it must have been merely the pasting in of the illustrations and the fragmentary biblical texts.  Similarly, Virginia was enlisted by her father in his renewed campaign to encourage settlement in the colony for which she was named and to promote its prosperity.  He attributed to her pen broadsides that echo his own tortuous prose, and the Ferrar Papers contain drafts in his hand for her to send to colonists, ranging socially from the Governor’s wife to the illiterate Michael Upchurch who had gone out as a teenage indentured servant c.1638 from the neighbouring Huntingdonshire village of Brington. In 1651 a map of Virginia was credited to “John Ferrar Esq,” later editions to “Domina Virginia Ferrar.” And, of course, she was involved in the cultivation of silkworms at Gidding.

The Ferrar papers make clear that after her father’s death in 1657 her interest in both the colony and the silkworms ceased.  For the second half of her life (she died in 1688) she lived the life of a conventional spinster gentlewoman. Living with her younger brother but possessing her own income, she led an independent life, visiting cousins in London, arranging apprenticeships for her nephews and education for her nieces.  Her previous interests had testified not so much to her interest in the colony and the insects but to her love for her father.

If John Ferrar’s daughter is thus not the centre of widening circles of correspondence, who was the link that brought John Ferrar into contact with Hartlib?  The most likely candidate is Richard Wodenoth.  He was the great-nephew of old Mrs Ferrar, the mother of John and Nicholas.  When his father died in 1634 his future was entrusted to his uncle Arthur Wodenoth, a London goldsmith who—more to the point—was in effect the London agent for his cousins once they had retreated to Little Gidding. Arthur apprenticed Richard to a stationer, and when he set up on his own, it is not surprising Richard published for John Ferrar his (anonymous) pamphlet A Perfect Description of VIRGINIA [dated 1649, but available late in 1648].  Wodenoth published other items for Ferrar, but in those years almost his sole taqsks were as the publisher of works by Dury, Comenius, and Hartlib.  Need we look further for Ferrar’s connection to Hartlib?

But there is still another question to be answered.  In his writings in the Atlas, Ferrar compares the Virginian silkworm to the European, and points out the differences between them.  The implication is that, as well as European silkworms, there were Virginian silkworms at Little Gidding, but how did they come there?  And did they come back as seed or as caterpillars or in bottoms?  Were they sent by Michael Upchurch (who, we know, sent other Virginian offerings to Gidding) or by some other correspondent?  More importantly, John Ferrar’s descriptions of these insects may prove to be unique.  I have not yet been able to find any other contemporary accounts comparing the two strains.

The Life of Nicholas Ferrar, by his brother John Ferrar; the two most useful editions are those edited by J.E.B.Mayor (1855), and by Lynette R. Muir & John A. White (1996)