Sometimes a document is much more than the text it contains. The roughly 40 late-colonial-era Peruvian cartas de hermandad (confraternal letters) in the JCB’s collection were a source of surprise and delight to me when I discovered them as part of my research as a Library Associates Fellow in fall of 2015. As single-sheet imprints they were a deceptively simple grouping: a type of document that often doesn’t survive, but that historically would have been among the most abundant products of colonial Peruvian presses. They are what Peter Stallybrass has deemed “little jobs,” those quickly assembled and rapidly printed ephemeral invitations, childrens’ grammars, calendars, pamphlets, bulls, almanacs, and broadsides that were printers’ bread and butter. 1) Objects of this nature are relatively rare today for diverse reasons: while many of them were made for specific occasions and then thrown away after the event had passed, others saw heavy use, as when children learning to read thumbed the pages of grammars to shreds. 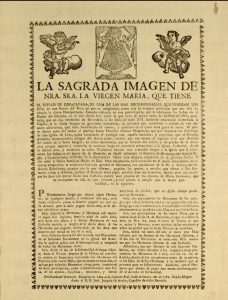 The JCB cartas de hermandad fall into this latter category of documents meant for repeated use. These documents contain a relatively substantial amount of printed text, but this text was ultimately secondary to their symbolic weight. Similar to a modern library card or university ID, the most important information the cartas conveyed was membership, not to a library or institution of higher learning, but rather as a brother or sister within a religious confraternal organization. Thus, while the printed text can tell us quite a bit (it generally lists the requirements for joining the confraternity and the privileges given to members), the text that most drew my attention was handwritten by contemporary users, often in nearly illegible scrawl on the back of each carta.

If the inscriptions attest to the ways in which these documents were used, so too do the documents themselves. The cartas are creased with fold lines, and one section of each carta is inevitably darkened from greater exposure to dirt and dust. The creases and dirt substantiate what the inscriptions suggest: these were objects whose symbolic significance came not just from their text but also from their physical presence. They were to be carried on the person of the confraternity member, and apparently members carefully folded them into packets in order to do so. In this form the document couldn’t be read, but it stood as physical evidence of affiliation, available to be supplied at any moment if necessary.

The cartas have further information to offer about confraternal practices. As noted, the printed text of the cartas stipulates both the obligations and rewards of confraternity membership. Inscriptions on two of the JCB’s cartas attest to how seriously confraternities took their rules and regulations, at least in these two instances. In accord with the carta’s printed text’s insistence that, “no person older than sixty, or who is currently, or habitually, ill be allowed to join” (á ninguna persona que pase de sesenta años, ó estubiere actual, ó habitualmente enferma se asiente por Hermana de la Cofradia), in 1802 the confraternity of the Blessed Souls of Purgatory based in Lima’s cathedral ejected one José Velasco from their ranks. In an extended paragraph, an individual who signs his name as “Plata” explains, “given that this brother even before he joined suffered from emission of blood from his mouth . . . he returns . . . in this letter what he would have contributed [to the confraternity].” (Respecto a q.e este hermano aun antes del asiento padecia echar sangre por la voca . . . devuelbue al mi____[micaesado? interesado?]_ en esta carta lo que hubiese contribuido.) One of the benefits of joining a confraternity was the promise of aid with the expenses of your funeral at your death. Understandably, confraternities did not wish to admit ill or infirm members whom they might quickly have to insure should they succumb.

Similarly, confraternities insisted that their members remain up-to-date in their payments, and would expel members who failed to do so. It may be the same Plata who in 1810 certified on the back of a carta of the confraternity of Our Lady of Charity that “given that the interested party in the cause confesses that five months have passed without payment [and] declares that there is no possibility of making the payment [he] is erased from the book and [expelled?]” (Respecto a q.e el interesado en esta causa confiesa hace cinco meses q.e no la paga se declara no haber lugar a el pago de ella borrece del libro y exclubere.)

How these particular cartas survived to reach the JCB’s collection is unclear. Did the confraternity impound them so that they lived on in the confraternity’s records? Did the individuals hold on to them even after their rejection from the organization? What is clear from the JCB cartas is that many cartas weren’t preserved as these were. Although countless documents from the colonial period have disappeared in the intervening years, some were lost more quickly. The JCB’s two copies of the 1778 carta of the Confraternity of Saint Joseph of the Church of Our Lady of the Good Death both contain inscriptions saying they are replacements for others that their owners had lost. JCB copy 1 of the 1784 carta for the same confraternity also includes such an inscription: “In place of another that was lost to Doña Rosa de Leon” (Por otra que se perdio à Dª Rosa de Leon).

If the cartas attest to loss (both of documents and of membership) they also record intriguing evidence about individual’s participation in confraternities. Of the roughly 40 cartas in the collection, four belonged to a single woman—Juana de Cortés, and an additional two belonged to Pasquala Romero. No clear relationship links the four confraternities of which Juana de Cortés was a member nor Pasquala Romero’s two. All six are located in diverse churches and associated with different religious orders.

If this narrative has thus far focused on the textual aspects of the cartas, it was their visual aspects that first drew me to them. In addition to their textual content, each carta features a small woodblock (around 3” in height) depicting the titular saint, Virgin, or image of Christ of the confraternity. These prints offered members a personal, portable version of the confraternity’s cult image and may have served an apotropaic purpose as well—protecting the confraternity member from harm by carrying the carta on his or her person. The images themselves are very simple woodblocks that show signs of heavy use in the form of worn borders and fractures in the block. They also appear repeatedly over multiple years of use, so that the Confraternity of Saint Joseph in the Church of Our Lady of the Good Death, for example, used the same damaged block for the JCB’s cartas of 1776-1780, and 1783-85.

What exactly is the relationship between these simple woodcut depictions of saints and the opulently dressed and adorned, miracle-working, candlelit and flower-bedecked original statues or paintings that they reproduce? The prints on the Virgin of Copacabana cartas in the JCB’s collection underscore the ambiguity of reproduction in colonial religious practice. The prints offer inconsistent visual specificity. The 1776-1778 and 1782 JCB cartas all feature similar depictions of the Virgin, although the 1782 carta has a different woodblock. These prints depict the Virgin as a statue—arrayed on a pedestal with curtains drawn back to reveal her to the viewer. She holds the Christ child and puttis hover to either side. Notably, none of these prints shows the Virgin holding a candle: the key identifying element of the Candlemas iconography with which the Virgin of Copacabana is associated. Separated from the context of the carta, we would be challenged to identify these prints other than as generic depictions of a statue of the Virgin Mary. Underscoring this representational ambiguity, the 1772 print seems to be a completely different iconography entirely: a Virgin of the Rosary.

But was mimesis necessary for these images to represent the confraternity’s Virgin of Copacabana? It seems likely that a printer accidentally substituted the wrong block for the 1772 carta or simply used a Virgin of the Rosary block that he had on hand as sufficient for the task. And yet, here contextual clues seem as important, if not more so, than visual ones. These prints depict the Virgin of Copacabana because the cartas say that they do. Likeness is not always necessary for presence. 2)

The JCB’s cartas are remarkable as survivals, examples of objects whose chances of enduring through the centuries seemed minimal, but they also offer unusual insight into the lived religion of limeños living in the final moments of the Viceroyalty of Peru. The cartas demonstrate the seriousness with which limeños engaged with their confraternities and confraternities governed their membership, and the rich materiality of this practice. Confraternity membership was about intangible qualities of mutual support, community, and improved circumstances after death, but it was also about tangible, physical objects, like the cartas, that materially linked the diverse members, comforting and protecting them in their daily lives.

2). Even if the title of Hans Belting’s 1990 Likeness and Presence: A History of the Image before the Era of Art, might suggest otherwise.