Eighteenth-century Parisians never ate garlic. According to the French doctor Pierre-Joseph Buc’hoz, its powerful and lingering smell was not acceptable in polite society. This surprising assertion is one of hundreds of observations contained in Buc’hoz’ 1771 Manuel alimentaire des plantes, an encyclopaedia of hundreds of edible (and smoke-able) foodstuffs from around the globe.  Entries run from apricots to ‘zerumbeth’, or turmeric, passing through cannabis (smoked by Muslims), eggplant (‘it tastes a little uncivilized’), pineapples (you can buy entire candied pineapples, leaves and all, to serve as a dessert or table decoration), strawberries (absolutely bad to eat with cream, but in wine or sorbet), and—my particular interest—potatoes. 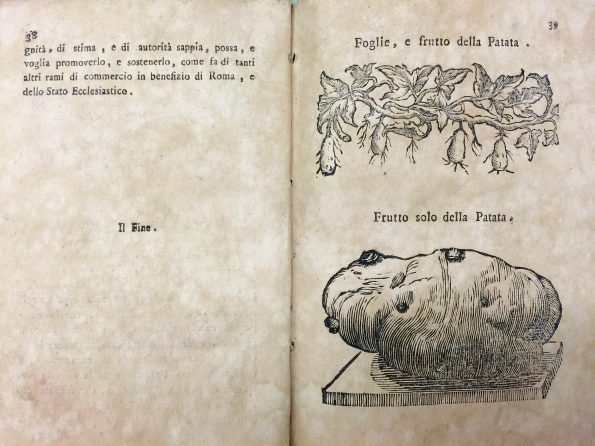 The late eighteenth century was obsessed with potatoes. Hundreds of promotional treatises, pamphlets, articles in newspapers and other publications praised the potato for its nourishing qualities, its agreeable taste, its ease of cultivation, and its prolific yield. ‘It’s a prodigy of nature’ insisted the Swiss writer Samuel Engel. It is the new world’s best gift to old world, agreed the French scientist Antoine Augustin Parmentier, whose name is now immortalised in French menu-speak as the indication that a dish contains potatoes. Hachis Parmentier is shepherd’s pie—stewed meat covered with mashed potatoes. I am interested in this enlightened potato-talk. I am also interested in recipes.

Perhaps the most f 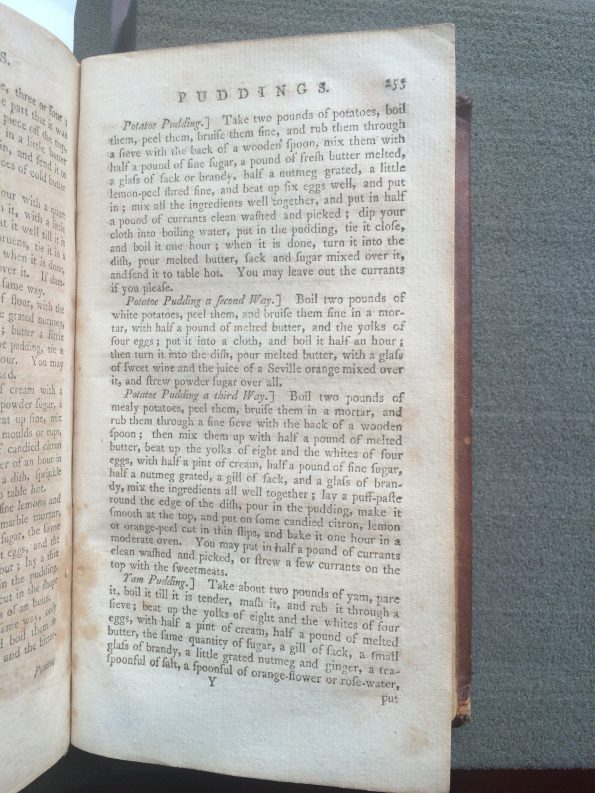 amous eighteenth-century potato dish is a rich pudding made of mashed potatoes, cream, eggs and sugar. Many cookbooks contain recipes for this dish, sometimes adding currants or white wine, sometimes omitting the cream and adding nutmeg or cinnamon, sometimes covering the pudding with a layer of puff pastry.  I decided to make two potato dishes: a version of the potato pudding, and also a savoury dish recommended by Buc’hoz.  Here is his recipe:

After boiling the potatoes chop them up and mix them with bread-crumbs, some egg yolks, and fines herbes. Make them into little balls and brown them in butter in a casserole.

Buc’hoz says that of all the ways to prepare potatoes, this is the best.  We’ll see.

(To be continued following cooking experiment.)