‘It’s a lot better than I thought it would be.’ This was the consensus among the team of John Carter Brown staff and fellows who sampled two eighteenth-century potato pudding recipes. We re-created two different sweetened potato puddings, using recipes from Richard Briggs, The New Art of Cookery. 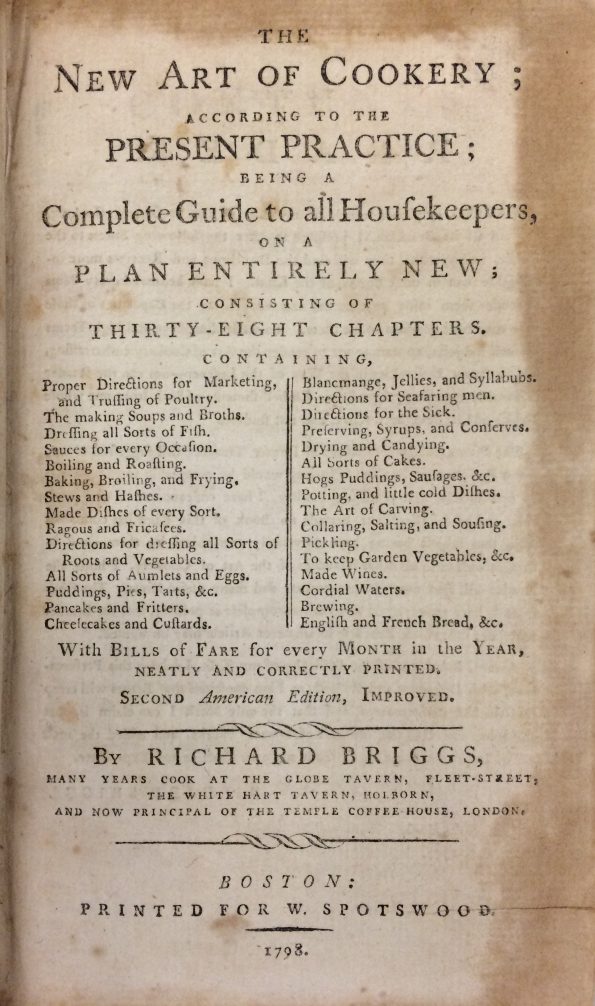 Briggs was the chef at several taverns and coffee houses in London in the late eighteenth century, and composed a fascinating cookbook with instructions for making many intriguing dishes. He explained how to prepare a ‘pilloc [pilaff] the Indian way’, as well as ‘pigeons in Pimlico’, various ‘amulets’, or omelettes, ‘pink-coloured pancakes’, macaroni, and a ‘West India pepper pot’. He also explained how to truss a turkey, how to tell if your fishmonger is trying to fob you off with rotten fish, and how to make your own beer. The New Art of Cookery includes seasonal menus for grand dinner parties, as well as an entire chapter on recipes suitable for use at sea. The whole thing is written in a delightfully chatty tone. ‘If you disapprove of the red herring, you may leave it out’, reads the instructions for hare soup.

The version of his cookbook that we used was published in Boston in 1798, and like most cookbooks printed in the USA and Britain in these years Brigg’s collection includes recipes for sugary potato puddings, pies, and tarts. The New Art of Cookery in fact gives three different recipes just for potato pudding—one baked and two boiled. We tried one of each. The recipes are given below, in their original format, and adapted to modern measures. The ingredients for both are very similar: mashed potato, sugar, brandy, nutmeg, currants and a shocking quantity of butter and eggs. The main difference between them is that one is baked, under a puff-pastry crust, while the other gets tied in a tea-towel and boiled for a long time in a big pot of water. 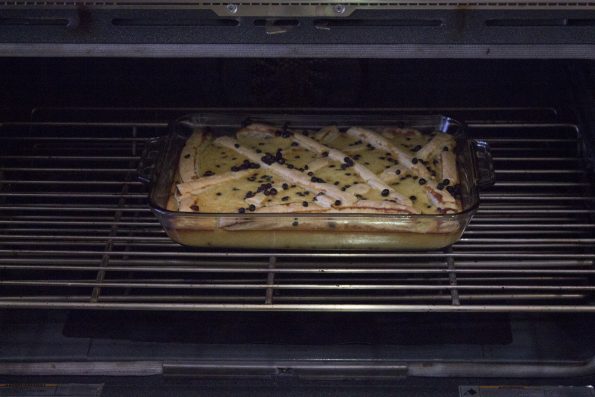 What did we learn from this experience? First, that potatoes can absorb a lot of butter; the boiled pudding calls for two pounds of potatoes and one pound of butter—and then, as if that wasn’t enough, more butter is poured over it as a sauce. Second, that baking and boiling produce quite different results. The baked pudding was fluffy and light, while the boiled pudding was spongy, like a dumpling. Finally, we learned that potato puddings are pretty tasty. The alcohol-rich butter sauce served with the boiled pudding was a hit, and only those of us who knew how much butter and cream they contained had any qualms about eating them. 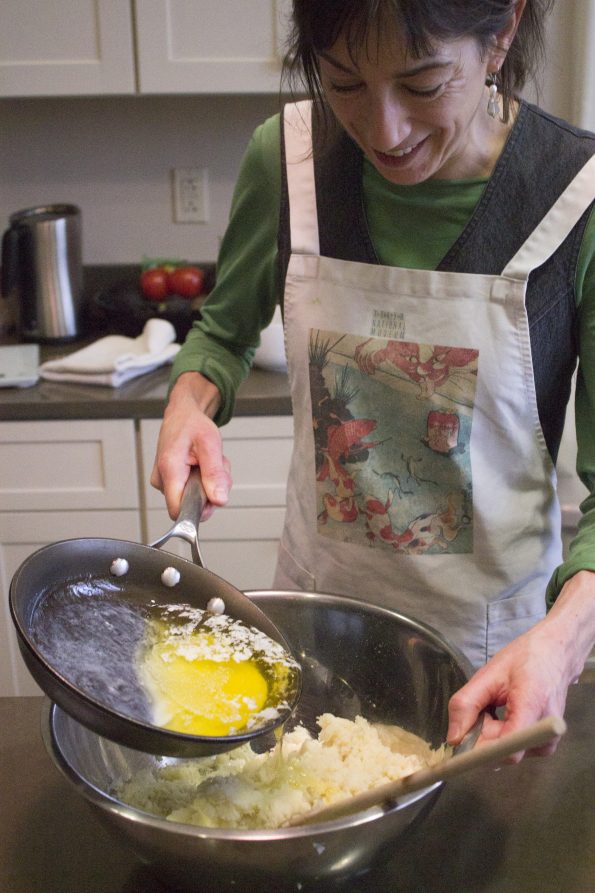 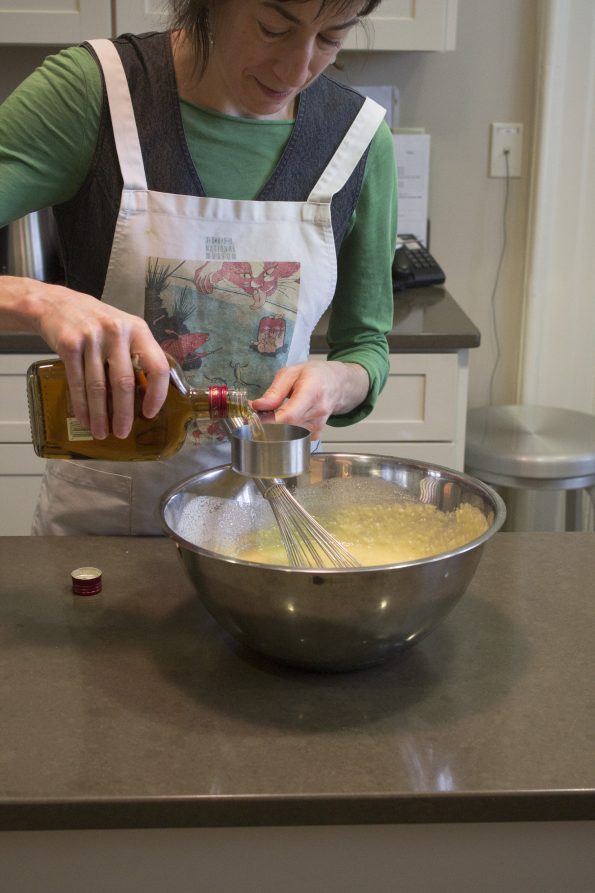 Potato puddings of this sort were very common; I’ve collected over 60 recipes from between 1596 and 1830. Our experiment doesn’t tell us what it was ‘really’ like to prepare or eat a potato pudding in the 1790s. We used a modern stove and modern ingredients and ate it with modern expectations about which foods go together (potatoes and meat) and which do not (potatoes and sugar). At the same time, it’s hard to believe that making and eating these puddings hasn’t increased our historical knowledge about the food. Scholars have for decades tried to find ways to access the things that people in the past knew how to do, but did not feel any need describe—the ‘tacit knowledge’ they gained from experience, rather than reading. This was the knowledge of artisans and craftsmen, and also of cooks. Our pudding experiment was one way to try to recapture some of this lost vernacular knowledge.

The Original Recipes from Richard Briggs, The New Art of Cookery (1798)

Take two pounds of potatoes, boil them, peel them, bruise them fine, and rub them through a sieve with the back of a wooden spoon, mix them with half a pound of fine sugar, a pound of fresh butter melted, a glass of sack or brandy, half a nutmeg grated, a little lemon peel shred fine, and beat up six eggs well, and put in; mix all the ingredients well together, and put in half a pound of currants clean washed and picked. Dip your cloth in boiling water, put in the pudding, tie it close, and boil it one hour; when it is done turn it into the dish, pour melted butter, sack and sugar mixed over it, and send it to the table hot. You may leave out the currants if you please.

Boil two pounds of mealy potatoes, peel them, bruise them in a mortar, and rub them through a fine sieve with the back of a wooden spoon; then mix them up with half a pound of melted butter; beat up the yolks of eight and the whites of four eggs, with half a pint of cream, half a pound of fine sugar, half a nutmeg grated, a gill of sack, and a glass of brandy, mix the ingredients all well together; lay a puff-paste round the edge of the dish, pour in the pudding, make it smooth at the top, and put on some candied citron, lemon or orange-peel cut in thin slips, and bake it one hour in a moderate oven. You may put in half a pound of currants clean washed and picked, or strew a few currants on the top with the sweetmeats.

1.5 pound potatoes, boiled, peeled and riced (or rub them through a sieve).

a glass of sherry or brandy

Combine these ingredients and then add

When done take it out of the cloth and put it into a dish.

Serve with the following sauce:

Peel them, mash them, and rice them (or rub them through a sieve).

Add to the potato mixture and combine the ingredients. Mix well.

Cut puff-paste into strips and lay it around the edge of a baking dish. Pour in the pudding, make it smooth at the top, and garnish with currants.

Bake for one hour.