The John Carter Brown Library’s wealth of manuscript records on Early American maritime commerce— including but not limited to ledgers, letters, logbooks, laborers’ books, account books, day books, portage bills, and bills of credit— represents both a challenge and a promise for a literary scholar such as myself. Can this textual field, one formed out of financial necessity, tell us anything about a distinctly literary aesthetics, production, or exchange? More pointedly, should this seemingly dispassionate record—one of facts and figures, wind and weather, dollars and cents—be of any concern for a scholar interested in the deeply personal dimensions of maritime labor and its corresponding narratives? In short, is it worth feeling through such an archive?

A related set of documents, found with assistance from the wonderful JCB staff, reveal the value of such an attempt. The first is the August 1789 “ articles of agreement” for the whaling brig Rising Sun, which sailed from Providence to the South Atlantic whaling grounds. The document was a standard contract between its well-known owners, the partners Nicholas Brown and George Benson, and a largely anonymous crew. It beckons the reader to “ witness our hands” as they agree upon their relative stake in the voyage ahead. The crew is designated by their laboring place on board (“ Quality” ) as well as their economic claim to the united venture (“ Share” ), but it is their signed name that seals their fate. Their signature, or “ hand,” is a narrative assertion of selfhood; it is also textual proof of a willingness and capacity to bind their laboring hand to rest. 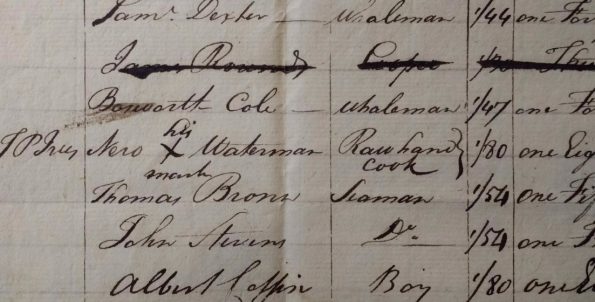 Among these signatures, the name “ Nero Waterman” struck my eye. This man shipped as a “ Raw hand/cook” with a relatively meager one-eightieth share. His last name, “ Waterman,” potentially connects him to one of Rhode Islands founding families, one whose wealth remained tied to plantation slavery. “ Nero,” derived from the Old Latin word for “ man” (nara), was also understood as a designation of black skin. His status as the ship’s cooks, a racialized position on the period’s vessels, appears to suit his name of “ black man of the water.” The question of Nero’s past or present freedom/bondage would require further research. Nonetheless, his text itself caught my imagination. Nero asserted himself only through “ his mark,” or an “ x” ostensibly derived from his own hand. Set between his first and last name, the “ x” both bifurcates his identity and links its two parts. The “ x” is an assertion of personal presence, but that assertion is recognizably his due to another literate hand’s direction. Nero’s marked “ x,” therefore, appears to echo his precarious position on both the ship and in the maritime archive.

Nero’s signature is unsteady, his letters halting and disconnected. The distinct first and second “ a” of “ Waterman” indicates a hand only recently and incompletely schooled. The slowly cascading line, which risks running off the page, stands in contrast with the neat and steady scrawl that stands above it. Nero Waterman has signed the ship’s final account book, which tallies each sailor’s take in the voyage just concluded. If the article of agreement represents hands that bound themselves together, each page of the July 1790 account signifies individuals who reached out and took the spoils of the year’s labor. It is only fitting that Nero’s narrative declaration of self took place at the moment of economic reward. Clearly, Nero would have been paid his $17.11 even if he did not sign his name. His “ mark” would again suffice. Even so, his signature indicates that Nero labored beyond his capacity as a raw hand or cook. He called upon all present to witness his hand. 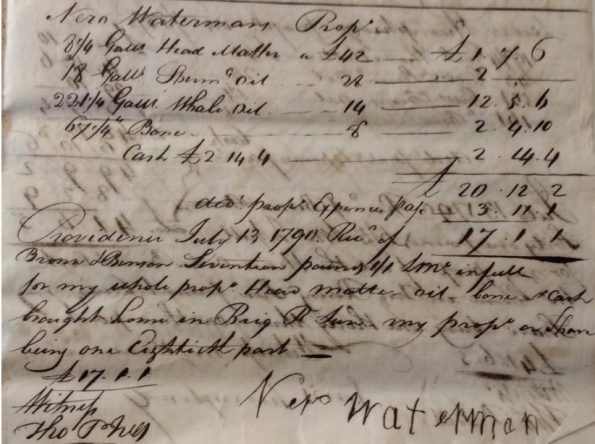 What occurred in the eleven months between these two documents remains to be witnessed. Nor do I know the length of Nero’s whaling career. A further study of logs and journals may yet yield some answers. The maritime archive is overflowing with sailors’ narrative accounts of their travels in logbooks or journals. Even so, one must not diminish Nero’s seemingly minor literary presence. His recoverable output may be nothing more than two parts of a business transaction, an undistinguished “ x” and an unsteady signature. This relative narrative absence, this lack of a full account of self, befits an era in which business records incompletely (and sometimes unintentionally) mark laboring or bound subjects’ full humanity. The slave ship log, the bill of sale, the plantation record, and the escaped slave notice are notably examples. Nero Waterman, a relatively unknown gives one reason to continue feeling through the maritime archive.