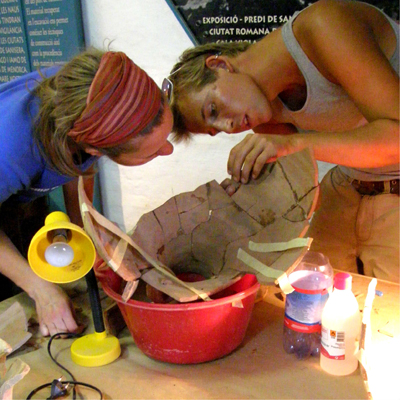 In 2008 the Sanisera Archaeology Institute for International Field Schools started its courses at the Roman city of Sanisera. During all these years many students have come from all over the world to study abroad to Menorca (Balearic Islands, Spain) in order to dig up the Roman remains located at this classical site on the Northern coast of the island.

The research is focused on the archaeological excavation of Sanisera and studies what happened in this Roman port connected to the maritime traffic that sailed the Mediterranean during those times. As a result, we know that this is a very interesting archaeological site, with abundant findings of multiple artifacts that will help us to reconstruct its past.

The excavation at the Roman city of Sanisera provides all the archaeological documentation necessary for the student to acquire enough training and experience in all aspects involving an excavation dating from the Roman period, between the 2nd century BC and the 6th century AD.

In addition to this, we have excavated 90 tombs so far, which belong to a Roman cemetery that could have been related to a basilica in the Roman city if Sanisera, which dates from the 4th and 6th centuries AD. The Osteology corpus in this necropolis includes more than 232 individuals.

Conservation is an integral part of the archaeological process and the post-excavation study of archaeological finds. During the excavation you will find urban structures, Roman graves and archaeological remains from the Classical period including Roman pottery, amphoras, glass, human bones, faunal remains, coins, metals –bronze, iron, silver-, ivory, etc. All these artifacts have to be treated in a particular way depending on the material they were made of, by applying a set of techniques and methods to preserve and protect them in perfect conditions against deterioration.
Once fieldwork is finished, those archaeological structures belonging to buildings and tombs remain out in the open and exposed to both human and natural agents of all types. Fieldwork in conservation will apply a program and a set of practices to the preservation and consolidation of archaeological remains located in the Roma city of Sanisera.

Also all archaeological materials found at Sanisera will be treated properly at the laboratory, where we will clean, inventory and classify them. When necessary, materials will be restored before packing them properly in boxes that will be sent to safe storage areas in the museum.

For more information and to apply, go to: http://archaeology.institute/034-conservation-in-archaeology-on-the-dig-of-sanisera.asp