ARCHAEOLOGY AND HISTORY OF LYDIA FROM THE EARLY LYDIAN PERIOD TO THE LATE ANTIQUITY (8TH CENTURY B.C.-6TH CENTURY A.D.): AN INTERNATIONAL SYMPOSIUM
May 17-18, 2017 / Izmir, Turkey

The Izmir Center of the Archaeology of Western Anatolia (EKVAM) is glad to inform you that an
international symposium on the region Lydia in western Turkey will take place on May 17-18, 2017 at the
Dokuz Eylül University (DEU) in Izmir, Turkey. Lydia was an ancient region, located in inner western
Anatolia, streching from today’s Turkish province of Manisa in the west to Uşak in the east. Since the book
of C.H. Roosevelt, entitled “The Archaeology of Lydia, from Gyges to Alexander”, archaeologically and
historically Lydia became a special focus in the fields of ancient Anatolian studies. We warmly invite
contributions by scholars and graduate students from a variety of disciplines related to this region. The aim of
this symposium is to report on the state of research concerning Lydia between c. 8th century B.C. and 6th
century A.D. Intended to bring together scholars of archaeology, history, historical geography, epigraphy and
other related disciplines in ancient Anatolian studies to discuss a range of issues concerning this region’s
archaeology and history, this symposium should be an excellent opportunity to increase our knowledge about
this region. The following theme groups are the main questions of the symposium which are prescriptive:

– Archaeological field projects and museum studies in Lydia,
– Lydia during the Iron Age,
– Lydia in ancient mythology,
– Lydia during the Archaic, Classical, Hellenistic, Roman and Early Byzantine periods,
– Lydia and Lydians in ancient authors, eg. Homer, Herodotus, Strabo, Hippolytus of Rome and Hierocles,
– Ethno-cultural landscape of ancient Lydia and ethnoarchaeology,
– Lydian language, script and epigraphy,
– First coinage in Lydia: Reasons, circulations, dynamics and mechanisms,
– The Royal Road,
– Relationships between Lydia and Ionia, the Achaemenid Empire as well as other neighbouring regions,
– Historical geography and settlement patterns in Hellenistic, Roman and Late Roman-Early Byzantine Lydia,
– Roads, routes and population in Lydia,
– Lydia as a part of the Roman province Asia and the “seven churches of Apocalypse”,
– Forms of Christian presence in Roman and Early Byzantine Lydia,
– Jews and Jewish heritage in Roman and Early Byzantine Lydia,
– The province Lydia under the tetrarchy reform of Emperor Diocletian in A.D. 296,
– Episcopal sees of the late Roman province of Lydia,
– Population and settlement boom in the “Justinianic” era,
– Miscellanea.

On these themes and questions, all approaches and methods susceptible to bring some progress to our
current knowledge are of course welcome: archaeology, ancient history, historical geography, epigraphy,
numismatic, history of art, cultural anthropology etc. English is the official language of the symposium. The
symposium will take place at the Blue Hall of DESEM in the Chancellery Building of DEU. A local
archaeological journal is planned as a special issue containing the symposium’s abstracts which will also be
made available on the website. The proceedings of the symposium will be published in 2017. The symposium
is free of charge. We will make the required hotel reservations as soon as we know the exact number of
participants. The approximate cost for the accommodation per night + breakfast will be 20 €. A postsymposium
excursion is planned on May 19-21 to Chios, Greece through Izmir-Çeşme. For the participants
who cannot travel to Izmir, we will arrange a video-conference facility through Skype. There are several lowcost
flight companies (Pegasus, Sunexpress, Onur Air, Easyjet, Eurowings etc.) which operate direct flights to
Izmir from several locations. The symposium’s program will be regulating for those who are also planning to
participate to the symposium in Thessaloniki, Greece, entitled “Classical Pottery of the Northern Aegean and
its Periphery “ which will take place on the same date with the Lydia Symposium, i.e. May 17-20, 2017.

We would be delighted, if you could consider contributing to our symposium and contact us with the
required information below before January 1, 2017. Our e-mail address is: [email protected] For all
your queries concerning the symposium our phone number is: +90.544.938 54 64. The organizers seek to
widen participation at this symposium, and would like to encourage colleagues from all parts of the world to
attend. The symposium committee kindly requests that you alert any persons within your research community
who would be interested in participating at this symposium, either by forwarding our e-mail, or by printing
this circular and displaying it in your institution. We hope that you will be able to join us at the Dokuz Eylül
University, and look forward to seeing you in Izmir!

Required Information for the Participation to the Symposium
Type of Participation:
Lecturer:
Observer:
Lecturer Through Skype:
Name:
Academic Title:
Institution:
Complete Professional Address:
Cell Phone:
E-mail:
Are you planning to join to the post-symposium excursion to Chios, Greece?:
Any Special Requests:
Title of Your Lecture:
Abstract:
NB: An illustration can be included; it should be sent by e-mail to [email protected]

The Kom al-Ahmer – Kom Wasit Archaeological Project is planning its next excavation season between April and May 2017. The mission is based in the Western Delta of Egypt, 50 km SW of Alexandria, and is currently accepting applicants. Please find attached the flyer illustrating more details regarding the next excavation campaign. Archaeologists and young Egyptologists interested in participating and taking part in the project are encouraged to contact us (all contact information is listed on the flyer). 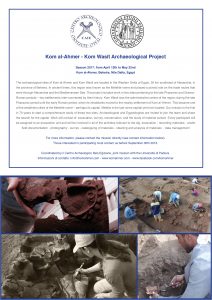 Herewith, we again would like to remind you about the 2016 Joint Chapter Meeting of CAA Netherlands/Flanders and CAA Germany that will be held in in Ghent, Belgium, November 24–25, 2016, in collaboration with the Department of Archaeology of Ghent University and the Flemish Heritage Agency.

We want to acknowledge the authors who have already submitted their paper proposals in advance of the September 1st, 2016 deadline. As we have received many requests to extend the deadline because of the summer holidays, the final deadline for submission is *Friday September 16th, 2016*.

We welcome proposals for 20-minute papers on any of the above topics. Abstract in English should be sent to mailto:[email protected]. Abstracts will be considered by the committees of CAA NL/FL and CAA DE. Abstract should include name and surname, university, institute or company (if applicable), address and telephone number, e-mail, session for which is applied, and abstract text (max 500 words).

The aim of the CAA meetings is to bring together academic and commercial archaeologists with a particular interest in using mathematics and computer science for archaeological research. For the 2016 Joint Chapter Meeting of CAA, we kindly invite papers focussing on the following themes:

The conference will be preceded by a LiDAR-workshop (November 23rd, 2016). During this workshop, participants will learn what LiDAR data is, how to effectively work with LiDAR (e.g. by building digital elevation and surface models and by looking into different LiDAR visualisation and analysis
techniques), and how to use it for archaeological research.

We are very much looking forward to welcoming you in Ghent at the 2016 Joint Chapter Meeting of CAA Netherlands/Flanders and CAA Germany.

The UCL Institute of Archaeology currently has a vacancy for a Teaching Fellow in Comparative Mediterranean Prehistory (Ref.:1567589). The deadline for applications is 8 September 2016.

The post-holder will take an active role in the development and recruitment for the MA in Mediterranean Archaeology, and will contribute to administrative duties related to teaching and the running of the Institute.

The post is available for 5 years in the first instance.

Native American settlement along Rhode Island’s coastlines over the past 5000 years has generated a rich and irreplaceable archaeological record. Unfortunately, much of this record may be destroyed in the coming decades by rising sea levels and coastal storms of increasing intensity and frequency. Following Hurricane Sandy, the RIHPHC noted extensive damage to archaeological sites listed in the National Register of Historic Places (NR) and many sites eligible for listing in the NR on Block Island and along the South Coast. Using Hurricane Sandy Disaster Relief Grant funds from the National Park Service, U.S. Department of the Interior, the RIHPHC designed and administered surveys to identify and evaluate these sites. The recently completed surveys identified and documented archaeological sites damaged by Hurricane Sandy, evaluated the significance of these sites, projected their susceptibility to future storm damage, and proposed management options.

The RIHPHC will hold two public meetings to present survey findings and solicit comments and suggestions regarding long-term site management. State Archaeologist Timothy Ives explained that “Local engagement is the foundation of both coastal resource management and historic preservation in Rhode Island.”

Information on the two meetings are as follows:

The Public Archaeology Laboratory Inc. will present the results of their survey of archaeological sites damaged by Hurricane Sandy on the South Coast of Rhode Island. Their study area consists of coastlines on the east side of Point Judith Neck (extending from Narragansett Pier southward to Point Judith) and along the southern shores of Narragansett, South Kingstown, Charlestown, and Westerly to Napatree Point. Archaeologists will discuss several Native American archaeological sites, in addition to Fort Mansfield, an Endicott Era coastal artillery installation. Public questions, comments, and discussion will follow.

This meeting will feature a presentation by the Public Archaeology Laboratory, Inc. on a seventeenth-century Native American site exposed by the washout of Corn Neck Road, the only land route between the northern and southern portions of Block Island. Next, the Mashantucket Pequot Museum and Research Center will present an overview of archaeological sites along the island’s perimeter and low-lying salt ponds. Their findings show that Native American sites across the island are more diverse and widely distributed than previously thought, substantially recasting local research and preservation priorities. Public questions, comments, and discussion will follow.