The Izmir Center of the Archaeology of Western Anatolia (EKVAM) is organizing a symposium entitled „Unguentarium. A terracotta vessel form in the Hellenistic, Roman and early Byzantine Meditterranean” that will take place on May 17-18, 2018 at the Dokuz Eylul University (DEU) in Izmir, Turkey. The first circular of this symposium as well as its poster are attached below.

An unguentarium is a small ceramic or glass bottle, found in relatively large quantities in the entire Mediterranean, from Spain to Syria, from Egypt to France, where they were produced from the early Hellenistic (i.e. mid fourth cent. B.C.) to the early Medieval periods (i.e. mid sixth cent. A.D.). In this symposium we only focus on terracotta unguentaria between c. 4th century B.C. and 6th century A.D., and attempt to set out a comprehensive model for the study of terracotta unguentaria, including their definition, typology, chronology, contexts, function, regional characteristics, and distribution patterns in the whole Mediterranean geographies, including whole eastern Mediterranean, Roman provinces in the western Mediterranean, north of Alps (Germania, Britannia etc.) and north Africa. We warmly invite contributions by scholars and graduate students from a variety of disciplines of ancient studies related to this vessel form. The symposium is free of charge. A post-symposium excursion is planned on May 19-21 to Lesbos, Greece through Ayvalik.

We would be delighted, if you could consider contributing to our symposium and contact us with the required information below before January 1, 2018. Our e-mail addresses are: [email protected] or [email protected]

In 2010, SQCC established its Research Fellowship Program, which aims to promote and cultivate scholarly research about Oman across several academic disciplines. The fellowship is open to PhD candidates and university academics who are US citizens or affiliated with an American university, and funds one scholar or team of scholars to carry out research in Oman each year. The fellowship awards up to $51,000 for the fellow or team of fellows.

To read more about previous fellows and their research, visit this page.

The 2018 Fellowship application period is open.

To submit an application or find additional information, visit the website: https://www.sqcc.org/Scholarships-0024-Fellowships/Research-Fellowship-Program.aspx

Deadline to submit an application and supporting materials is September 17, 2017. 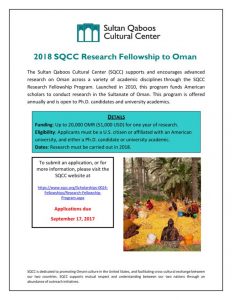