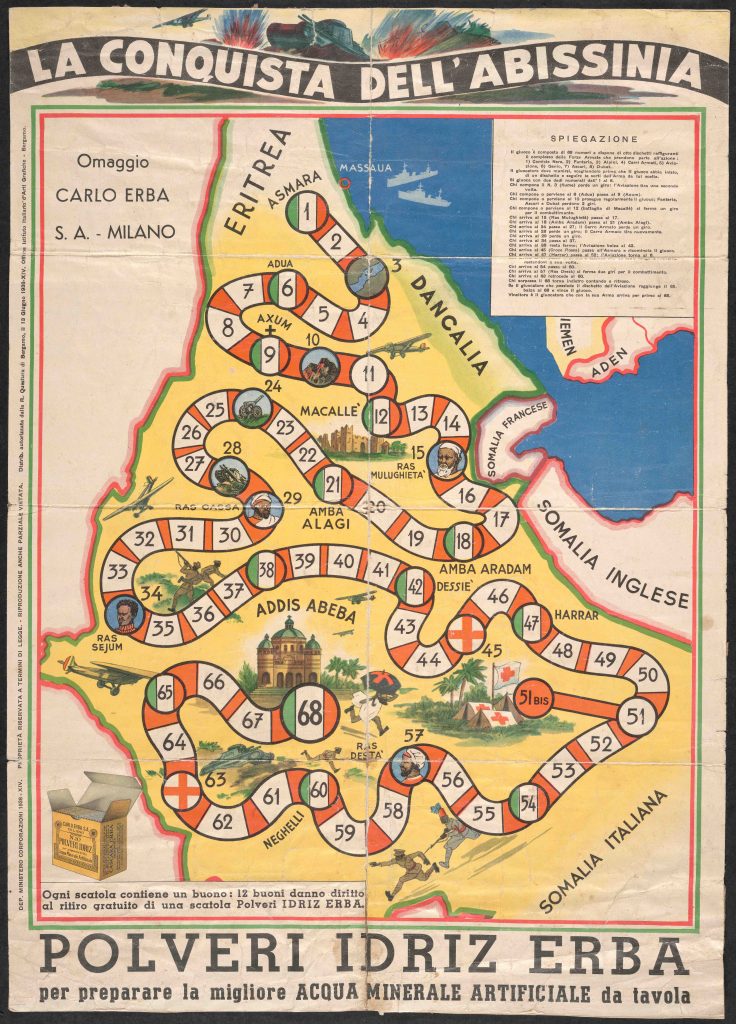 The John Hay Library has a new acquisition on display in the second floor landing case:

This Italian board game was created in 1936 by Officine dell’Istituto italiano d’arti grafiche in Bergamo during the Fascist regime of Benito Mussolini in the midst of the Second Italo-Ethiopian War (also referred as the Second Italo-Abyssinian War). The game was printed to advertise products from various Italian companies while spreading colonial propaganda that applauded the expansion of the Kingdom of Italy. This piece featured a powder to make artificial mineral water by the pharmaceutical company Carlo Erba, S.A.

Play is based on the rules of the European “game of the goose,” in which two or more players move pieces along a track of consecutively numbered spaces by rolling one or two dice. La conquista dell’Abissinia is played on a color illustrated sheet against the background of a map of the Ethiopian Empire (also known as Abyssinia). While not depicted, the game pays tribute to Pietro Badoglio, 2nd Duke of Addis Abeba, and his army and their ultimate occupation of the capital of Abyssinia. It consists of 68 numbered spaces representing the Italian flag, the Red Cross, contemporary political figures, and tanks of the Italian armed forces. The goal of the game is to reach the circle numbered 68 before any of the other players by avoiding as many obstacles as possible. It was designed to have a maximum of eight players, each equipped with a small disc representing various divisions of the Italian armed forces (Infantry, Air Force, Blackshirts, Alpine Troops, Corps of Engineers, Tank Division, Askari, or local colonial troops and Dubats or White Turbans). Directions are printed on the upper right corner of the sheet.