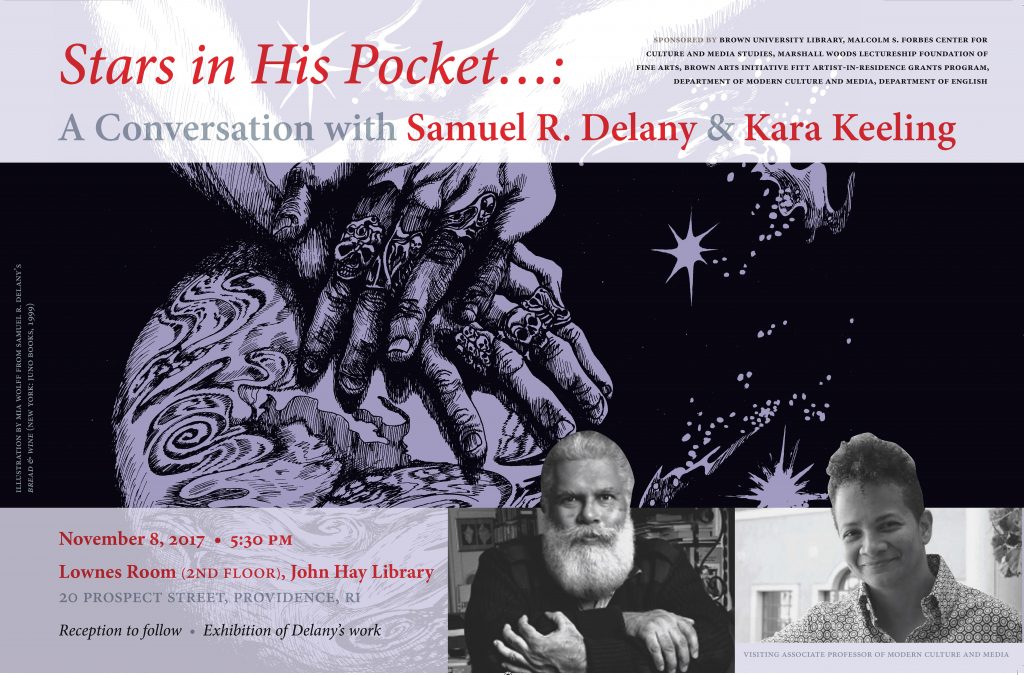 On Wednesday, November 8, 2017 at 5:30 p.m. in the Lownes Room of the John Hay Library, join us for “Stars in his pocket… : A Conversation with Samuel R. Delany and Kara Keeling.” The event will include an exhibit of Samuel Delany’s works and manuscripts from the Library’s collection. Free and open to the public. A reception will follow the talk.

Sponsored by the Brown University Library, the Malcolm S. Forbes Center for Culture and Media Studies, the Marshall Woods Lectureship Foundation of Fine Arts, the Brown Arts Initiative Fitt Artist-in-Residence Grants Program, the Department of Modern Culture and Media, and the Department of English, this event is part of Samuel Delany’s residency at Brown from November 6 – 10, 2017.

Samuel Delany is a highly laureled writer of science fiction and cultural criticism, in which he explores questions of sexuality, gender, race, language, perception, and the fluctuating conceptions of “the human.” His prodigious literary talents are intimately informed by his experiences as a gay black man, the grandson of a freed slave and nephew of famous civil rights workers. He is also an acute observer of off-the-grid urban spaces, the textures of micro-neighborhoods, and queer locations.

Kara Keeling is Visiting Associate Professor of Modern Culture and Media. Keeling’s research has focused on African American film, theories of race, sexuality, and gender in cinema, critical theory, and cultural studies. Her current research involves issues of temporality, media and black and queer cultural politics; digital media, globalization, and difference; and Gilles Deleuze and liberation theory. Keeling’s book, The Witch’s Flight: The Cinematic, the Black Femme, and the Image of Common Sense (Duke University Press, 2007), explores the role of cinematic images in the construction and maintenance of hegemonic conceptions of the world and interrogates the complex relationships between cinematic visibility, minority politics, and the labor required to create and maintain alternative organizations of social life. She is co-editor (with Colin MacCabe and Cornel West) of a selection of writings by the late James A. Snead entitled European Pedigrees/ African Contagions: Racist Traces and Other Writing and author of several articles that have appeared in the journals Qui Parle, The Black Scholar, Women and Performance, and elsewhere.