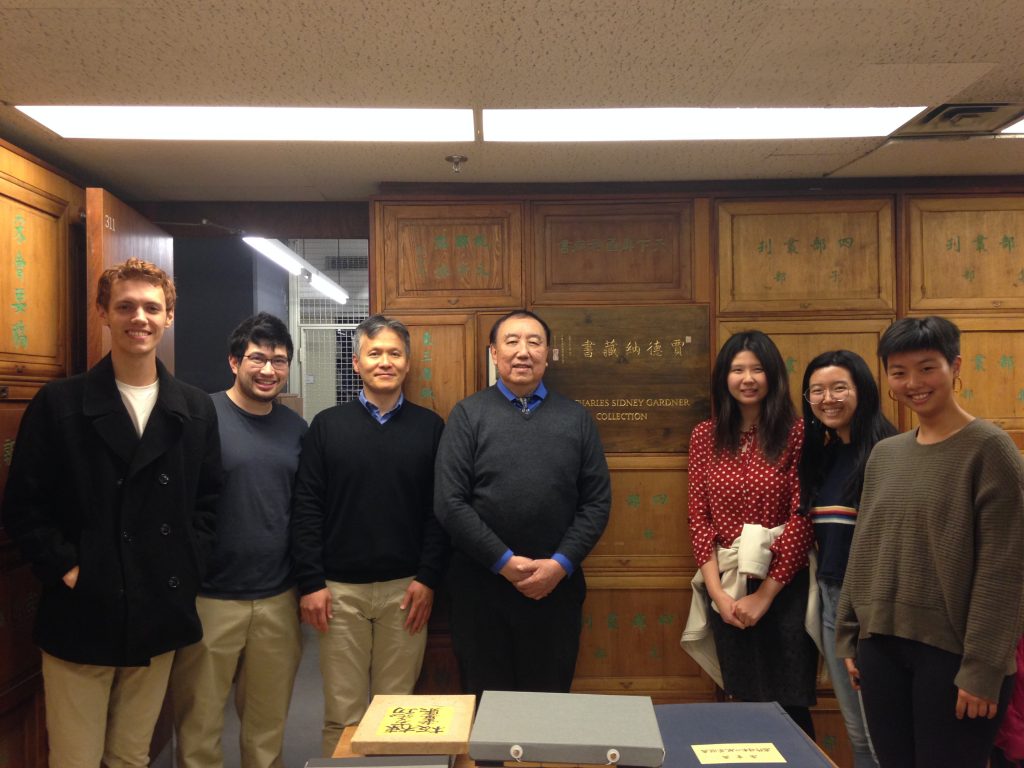 On Friday, October 19, 2018, as part of Family Weekend activities at the Rockefeller Library, the East Asian Collection (curated by Dr. Li Wang) hosted its Open House event. Many of the collection’s rare books, albums, and replications of famous calligraphic scrolls and traditional-style paintings were on display. The event was a major success, attracting large crowds of parents, faculty members, students, and those with an interest in the region’s rich cultural heritage. Visitors were enthusiastic to inspect the original Chinese ancient texts housed in the unique traditional-style cabinets of the Gardner Room of the East Asian Collection. Various beautifully bound texts from China, Korea, and Japan also captured the attention of visitors. The books covered a wide variety of topics such as Chinese printing culture, Tang and Song Dynasty poetry, Korean gardens, and Japanese children’s art.

Benjamin Davis, a 5th year master’s student in electrical engineering, when asked about his impression of the event, responded, “I originally came to the Open House event just because my friend who works there told me to, but being here, I’m really enjoying everything. I found this circular book on traditional Chinese currency, and even though I can’t read what it says, now I know what ancient Chinese money looks like, which is something I wouldn’t have known if I did not come here today!”

The East Asian Collection, a branch library located on the third floor of the Rockefeller Library, was developed from the original 30,000 volumes (the vast majority of which were Chinese texts) of “the Gardner Collection.” Now the Collection holds nearly 200,000 volumes of East Asian language print books, in addition to a good amount of print serials, audio-video materials, electronic resources (e-books, e-journals, and databases, etc.) and other formats. It has been recognized as one of the most distinguished mid-size East Asian libraries in North America.

The Gardner Collection was donated to the University by the renowned Harvard Sinologist, Charles Sidney Gardner, who lived in China during the 1920s and 30s and specialized in the study of Qing Dynasty history. Gardner not only collected a large number of ancient Chinese books, he also cultivated close relationships with many renowned Chinese scholars, including Hu Shih and Yang Lien-Sheng. There were items displayed regarding Gardner’s personal life, his publications, and letter correspondence with Chinese scholars at the Open House event. Some of these works were on display to the public for the first time, including Gardner’s family pictures, which were donated by his granddaughter, Professor Sarah Beckjord at Boston College, and some other materials recently discovered by East Asian Collection Curator, Dr. Li Wang.

The session concluded with a reading of a passage by Gardner on the importance of understanding China’s past and present to understand the power, presence, and influence it has in today’s world. In an article published in 1944, “The future of Chinese studies in America,” Prof. Gardner writes:

Whatever of evil has emerged from the present world conflagration, one good at least may be set against it: a new and rather startled awareness on the part of multitudes of Americans of certain fundamental similarity of outlook shared by the Chinese and ourselves. That bond may be in part expressed in terms of self-restraint, moderation, practical common sense, and respect for individual human dignity. There has come too a new awareness of our national ignorance, our insularity, provincialism; and with it a desire for light, for study of the Chinese civilization which we now increasingly see is superficially strange, but underneath so basically like our own. It is becoming clear that tomorrow will bring ever more insistent demands for those who can speak the national language of China, for those who can read her new living written tongue, and for those who possess the science to translate with precision her vast traditional literary heritage of twenty-five centuries’ growth. Against such demands of the morrow it is prudent to take thought and prepare today. The Chinese Library of the University will be the indispensable instrument of scholarship.